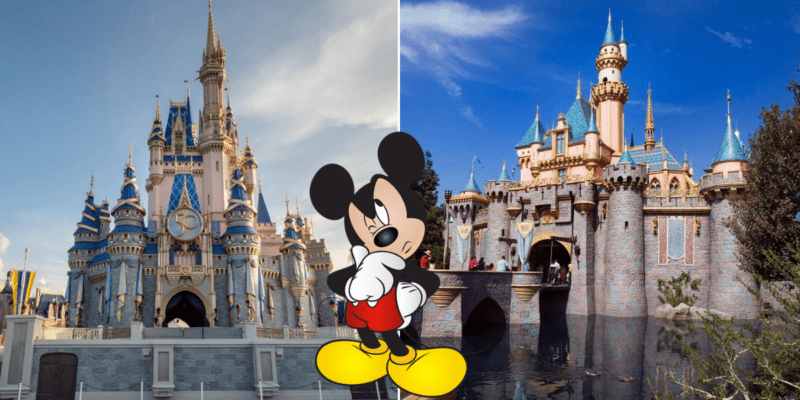 Recent changes at Disneyland and Disney world have reignited the age-old debate on which theme park is best. Disneyland vs. Disney World, which Disney Park are you rooting for?

Disneyland Resort in Anaheim, California, and Walt Disney World Resort in Orlando, Florida, have been staples for family fun in America since the 1950s, welcoming millions of families each year, eager to experience Disney magic through breathtaking storytelling, immersive lands, timeless attractions, innovative new experiences, world-class entertainment offerings, mouth-watering dining offerings, and so much more. With so much to see and do, it is no wonder why the Happiest Place on Earth and the Most Magical Place on Earth are some of the favorite destinations for American families and hundreds of thousands of international Guests.

However, Guests around the world have debated for years to decide which Park to attend. While everyone could fiercely discuss and enumerate the magical qualities of each Park, like which has the most rides and attractions, the best fireworks and entertainment offerings, the coolest merchandise, the largest Parks, and even the tastiest food, the age-old debate continues. Disneyland vs. Disney World, which is better?

Opening On July 17, 1955, Disneyland Resort is the original Disney Park. Built upon Walt Disney’s dreams and under his leadership, Disneyland Resort opened with 33 attractions, some of which Guests can still experience today, including:

Other iconic attractions like The Haunted Mansion, Pirates of the Caribbean, “it’s a small world,” and Matterhorn Bobsleds would open in the following decades, bringing innovative, thrilling, and fun experiences “to all who come to this happy place.”

Walt Disney World Resort would open on October 1, 1971, dedicated by Roy Oliver Disney with the following speech that still brings tears to the eyes of many Disney fans:

Walt Disney World is a tribute to the philosophy and life of Walter Elias Disney … and to the talents, the dedication and the loyalty of the entire Disney organization that made Walt Disney’s dream come true. May Walt Disney World bring joy and inspiration and New Knowledge to all who come to this happy place … a Magic Kingdom where the young at heart of all ages can laugh and play and learn – together.

With many attractions being an adaptation of Disneyland’s originals, Walt Disney World would grow to be home to four theme parks, Magic Kingdom, Disney’s Hollywood Studios, Disney’s Animal Kingdom, and EPCOT, which Walt considered to be the most exciting development in Florida. Per Walt Disney:

But the most exciting, by far the most important part of our Florida project—in fact, the heart of everything we’ll be doing in Disney World—will be our experimental prototype city of tomorrow. We call it E.P.C.O.T spelled E-P-C-O-T: Experimental Prototype Community of Tomorrow.

Each Park at Walt Disney World Resort now has its own attractions, entertainment offerings, and immersive lands themed to some of the most successful franchises of the last few decades, including Star Wars at Star Wars: Galaxy’s Edge and James Cameron’s Avatar at Pandora – The World of Avatar.

Attractions at Disney World and Disneyland

Both Disneyland Resort and Walt Disney World Resort are in constant development of new experiences for Guests, and that includes, of course, the different rides and attractions Guests can experience at each Resort.

The latest additions at Disneyland Resort include the opening of Millennium Falcon: Smugglers Run and Star Wars: Rise of the Resistance in Star Wars: Galaxy’s Edge at Disneyland Park; the opening of WEB SLINGERS: A Spider-Man Adventure, and the retheming of The Twilight Zone Tower of Terror, becoming Guardians of the Galaxy – Mission: BREAKOUT! in 2017 in Avengers Campus at Disney California Adventure. Mickey and Minnie’s Runaway Railway will open at Disneyland Park in January 2023, and a reimagined ToonTown will open later in 2023.

While Avengers Campus is a constant subject of discussion among fans due to the massive number of offerings it has brought to the Anaheim theme park, Walt Disney World Resort doesn’t fall behind on brand new attractions, with the latest ride opening a few months ago and several projects underway at the Orlando theme park.

Disney World has seen its fair share of successful projects in the last few years, starting with Pandora – The World of Avatar in Disney’s Animal Kingdom, which remains home to one of the most popular attractions in Walt Disney World, Avatar Flight of Passage, despite opening in 2017.

And at EPCOT, Guardians of the Galaxy: Cosmic Rewind opened its doors in May 2022, perhaps becoming the most popular roller coaster in the Florida theme Park. In addition, Disney is gearing up to open Journey of Water, Inspired by Moana, an all-new attraction with a massive 16-feet-tall statue of Te Fiti looking over it.

Both theme parks will undergo a complete retheming of the polemic attraction, Splash Mountain, which will become Tiana’s Bayou Adventure, an all-new ride inspired by The Princess and the Frog (2009), with a brand-new restaurant and a store inspired by the popular Disney film arriving exclusively to Disneyland Resort. This retheming at Disneyland and Disney World is opening in late 2024.

Does Walt Disney World have more rides than Disneyland?

While Guests can meet many characters at both theme parks, including Mickey and Minnie Mouse, Donald, Goofy, Pluto, Winnie the Pooh, Captain Jack Sparrow, Kylo Ren, Chewbacca, and Rey, Disneyland Resort takes the win when it comes to character interactions for many reasons.

At Disneyland Resort, Guests can meet the legendary bounty hunter Boba Fett (Temuera Morrison) and mercenary Fennec Shand (Ming-Na Wen) as they stake a claim in Star Wars: Galaxy’s Edge at Disneyland Park. Din Djarin (Pedro Pascal), known as the Mandalorian, and Grogu, the child who found protection with Mando, will be meeting Guests beginning mid-November. Disney has not released any information on the arrival of these characters to Disney World. Therefore, they remain exclusive to Disneyland Resort at the moment.

In addition, Guests can meet the residents of Radiator Springs in Cars Land at Disney California Adventure, including Lightning McQueen, Tow Mater, and Cruz Ramirez. With Cars Land being the only area themed to Pixar’s Cars franchise, these characters are also exclusive to Disneyland Resort.

Also in Disney California Adventure, Guests can meet earth’s mightiest heroes, such as Iron-Man, Spider-Man, Black Widow, Captain Marvel, Thor, Doctor Strange, Ant-Man, The Wasp, The Guardians of the Galaxy, Black Panther, and the Dora Milaje at the Avengers Headquarters and the Ancient Sanctum within the Avengers Campus.

And with the release of the latest MCU projects, even more heroes have arrived at Avengers Campus, including Loki, Sam Wilson’s Captain America, Hawkeye, Kate Bishop, The Eternals, Moon Knight, Wanda in her Scarlet Witch outfit, America Chavez, Ms. Marvel, Shang-Chi, Mighty Thor, and even the Werewolf from Werewolf by Night along with Elsa Bloodstone. Disney recently announced that M’Baku would soon make his journey from Wakanda to Avengers Campus at Disney California Adventure.

While these mighty heroes are worthy of admiration, one of the most ambitious debuts at Avengers Campus has been the arrival of The Incredible Hulk, a massive character that smashed his way into this year’s D23 parks and experiences presentation.

And if that wasn’t enough, Disney California Adventure has welcomed several new characters to celebrate this year’s Oogie Boogie Bash, including Madam Mim from The Sword in the Stone (1963), Mother Gothel from Tangled (2010), Bruno from Encanto (2021), and Ernesto de la Cruz from Coco (2017). In addition, Guests with tickets to this year’s Oogie Boogie Bash have met Merlin, Hercules, Megara, Ping from Mulan, and The Blue Fairy from Pinocchio, among other uncommon characters.

In contrast, Walt Disney World Resort welcomed Max in his Powerline outfit at this year’s Mickey’s Not So Scary Halloween Party. The appalling difference caused outrage among fans, who begged Disney to “be fair to Florida.”

When visiting Disneyland and Disney World, Guests want to make the most of their vacations, and what better way to do so than by staying at a Disney hotel?

Disneyland Resort is home to three hotels, Disneyland Hotel, Disney’s Paradise Pier Hotel, and Disney’s Grand Californian Hotel & Spa. While these resorts have incredible theming and are minutes away from the Parks, Walt Disney World remains the undisputed champion when it comes to hotels.

Walt Disney World Resort offers over 25 hotels on the property, some of them with their own exciting dining options, outdoor activities, and relaxing spa treatments. From budget-friendly rooms and luxury suites to camping grounds and cabins, Walt Disney World is undoubtedly the top alternative for a family stay on property.

The age-old debate of Disneyland vs. Disney World was recently reignited with the announcement of the Disney 100 Years of Wonder celebrations.

Disney announced that Disneyland Resort would kick off the celebrations for the centennial of The Walt Disney Company on January 27, 2023, with unique offerings coming to the California theme park, including dining and merchandise offerings, platinum-infused decorations, a whole makeover for Sleeping Beauty Castle, new outfits for Mickey, Minnie, and their friends, two brand- new nighttime spectaculars, and even the opening of the latest Disneyland attraction, Mickey and Minnie’s Runaway Railway.

While Disney’s 100th Anniversary celebrations will take place at Disney Parks worldwide — bringing unique offerings to each Park, including an all-new statue celebrating Walt Disney’s legacy coming to Hong Kong Disneyland — it would appear that the centennial celebrations will only take place at Disneyland Resort per the initial announcement, causing outrage among fans who already think Disney is not fair to other Parks. If it is true that Disneyland Resort, the original Disney Park, will be the heart of the centennial celebrations, the magic will not be exclusive to the Anaheim Park.

It is possible that the announcements for Walt Disney World’s offerings are being held back as the Orlando theme park celebrates the last few months of its 50th anniversary, in addition to other exciting changes and celebrations coming to EPCOT, and that all the exciting details could be revealed soon. However, this is purely speculative, as Disney officials have not released any statements regarding the subject.

While the debate to see which Disney Park is better, Disneyland Resort or Walt Disney World Resort, will probably continue for years to come, both Resorts hold special places in many people’s hearts, whether that be tied to the nostalgia of visiting as a kid, making new memories as an adult, experiencing Disney magic with your family, having a memorable trip with your significant other, or visiting the theme parks with friends, Disneyland Resort and Walt Disney World Resort will forever remain fan-favorite destinations.

Which do you think is better, Disneyland or Disney World? Let us know in the comments below!