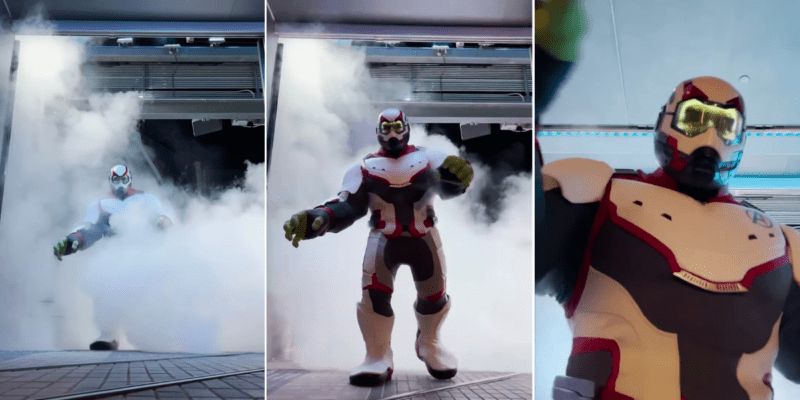 Disney just welcomed an incredible new Guest, who will be making a “giant” appearance at Avengers Campus for a limited time.

Guests visiting Avengers Campus at Disney California Adventure will have the chance to meet the strongest Avenger for a limited time on a breathtaking meet-and-greet experience using Disney’s most innovative technology.

As it was announced during this year’s Disney D23 Expo, in the “A Boundless Future: Disney Parks Experiences and Products” panel, Guests would soon be able to meet the strongest — and biggest — Avenger that has ever set foot in Disney California Adventure’s Avengers Campus, as The Incredible Hulk made a surprise appearance during the Marvel presentation, shocking attendees and viewers online with the size and detail of the character, who would arrive at the California theme park soon.

Well, the day has arrived, as Disney Parks (@disneyparks) announced the arrival of this heroic encounter on TikTok — and across Disney Parks’ social media platforms — giving viewers a closer look at the giant character and surely blowing Marvel fans away with this all-new experience arriving at Avengers Campus in Disney California Adventure today.

FIRST LOOK! The GIANT Incredible Hulk has made his way to Avengers Campus in Disney California Adventure park courtesy of his Quantum Suit! Catch him starting today for a limited time before he portals away! #Disney #DisneyParks #Disneyland #CaliforniaAdventure #AvengersCampus #Hulk

FIRST LOOK! The GIANT Incredible Hulk has made his way to Avengers Campus in Disney California Adventure park courtesy of his Quantum Suit! Catch him starting today for a limited time before he portals away! 💚💥 #Disney #DisneyParks #Disneyland #CaliforniaAdventure #AvengersCampus #Hulk

Disney didn’t release many details on this experience other than the fact that the Incredible Hulk would visit Avengers Campus for a limited time without mentioning any specific dates. It is unclear at the moment if The Incredible Hulk will roam Avengers Campus as other characters do or if he will make his appearance in a specific area or at certain times but having the chance to meet this giant hero is sure exciting for all the fans. Inside the Magic will update you as more details are released on this heroic encounter.

The Incredible Hulk will join America Chavez, Ms. Marvel, Shang-Chi, and Mighty Thor, who have also made their debut at Avengers Campus. In addition, Guests can meet Iron-Man, Spider-Man, Black Widow, Captain Marvel, Thor, Doctor Strange, Ant-Man, The Wasp, The Guardians of the Galaxy, Black Panther, and the Dora Milaje, who can currently be found at the Avengers Headquarters and the Ancient Sanctum within the Avengers Campus.

During this year’s D23 Expo, it was also announced that the Mandalorian and Grogu would also arrive at Disneyland Park in mid-November, meeting travelers visiting Star Wars: Galaxy’s Edge and interacting with them. In addition, Disney California Adventure will have a complete retheming to bring San Fransokyo to life, allowing Guests to live their own Big Hero 6 adventure and even meet Baymax. No official timeline has been announced for this exciting new project, as it is still in its early stages of development. Inside the Magic will update you as more details are released on this exciting retheming.

Would you like to visit Avengers Campus and meet the Incredible Hulk? Tell us in the comments below!