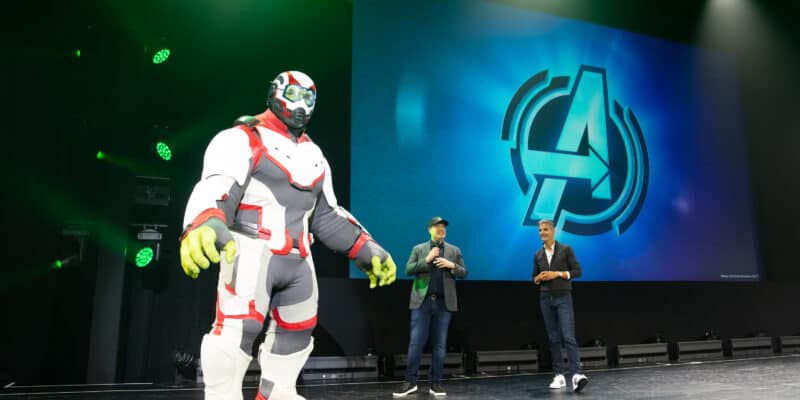 Avengers Assemble! A new superhero is coming to Avengers Campus at Disneyland Resort.

The Incredible Hulk himself, Mark Ruffalo, interrupted a presentation from President of Marvel Studios Kevin Feige and Chairman of Disney Parks and Resorts Josh D’Amaro, asking them to add some green to Avengers Campus.

Starting next week, meet Bruce Banner as Smart Hulk at Disney California Adventure! He’s appearing for a limited time, though Disney has not announced an end date for the character meet-and-greet. There is no word of Hulk coming to Avengers Campus at Disneyland Paris.

Though Mark Ruffalo hasn’t appeared in his own Avengers film, Edward Norton shared a unique version of the character with Marvel fans in 2008. From Marvel:

In this new beginning, scientist Bruce Banner desperately hunts for a cure to the gamma radiation that poisoned his cells and unleashes the unbridled force of rage within him: The Hulk. Living in the shadows–cut off from a life he knew and the woman he loves, Betty Ross–Banner struggles to avoid the obsessive pursuit of his nemesis, General Thunderbolt Ross and the military machinery that seeks to capture him and brutally exploit his power. As all three grapple with the secrets that led to the Hulk’s creation, they are confronted with a monstrous new adversary known as the Abomination, whose destructive strength exceeds even the Hulk’s own. One scientist must make an agonizing final choice: accept a peaceful life as Bruce Banner or find heroism in the creature he holds inside–The Incredible Hulk.

Are you excited to meet Smart Hulk at Disney California Adventure Park?