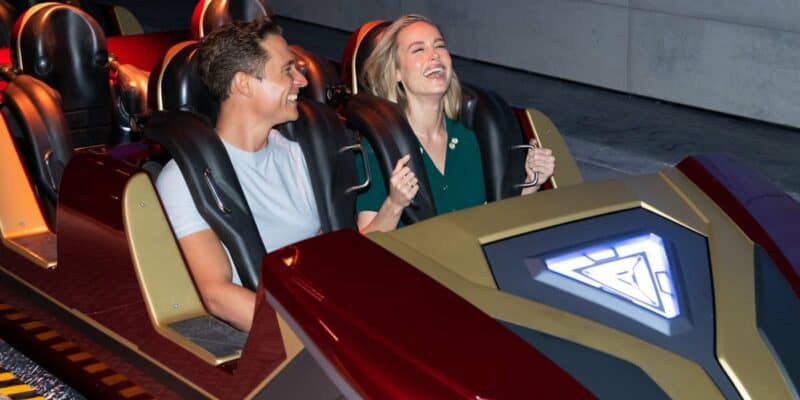 Larson is known for reprising her role as Carol Danvers/Captain Marvel for the attraction, which is set to open to all Guests on July 20, 2022.

Brie Larson was spotted several times over the last few days surprising Cast Members, posing for photos, and more ahead of the grand opening of the campus.

Plans for the highly anticipated coaster were first announced at the D23 Expo Japan back in 2018, as a highlight of a then newly proposed Marvel Universe at Walt Disney Studios Park at Disneyland Paris. In 2019, the Park’s version of Rock ‘n’ Roller Coaster closed its doors for good to make way for the superhero-themed thrill ride.

Avengers Assemble: Flight Force invites Guests to “team up with Iron Man and Captain Marvel and help them save the world from an intergalactic threat,” per the long awaited attraction’s description.

Disney Parks Blog shared more about what to expect as a “recruit” aboard the ride:

“Here, recruits will be briefed by Iron Man, equipped with Mark 80 armor for his missions at Avengers Campus in Paris. And there’s no time to waste as recruits join not only Iron Man, but Captain Marvel herself on a mission through space in a vehicle Stark has equipped with a homing device, to lure this threat away from Earth.”

She is set to return as Captain Marvel yet again in July of 2023 with the release of the Captain Marvel sequel, The Marvels. Little is known about this project to date, though according to Screenrant, some are speculating that the story could serve as a major set up for Phase 5, the next anticipated group films in the franchise.

Are you excited for the opening of Avengers Assemble: Flight Force? Let us know in the comments!