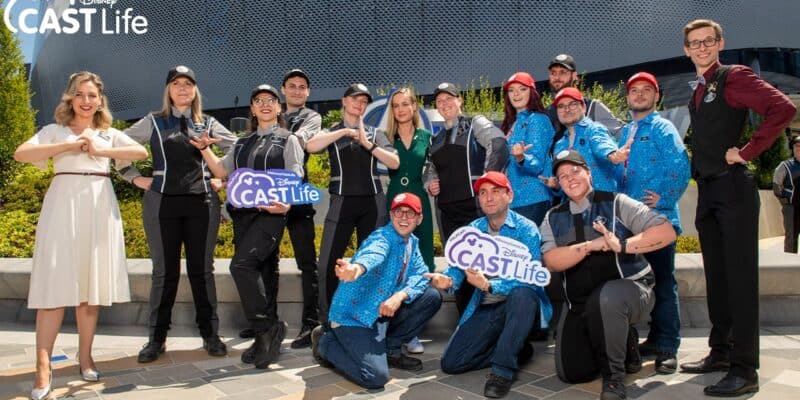 Disney Parks Blog shared the sentimental moment today, writing that some of the Personnel had been “in for a surprise of epic proportions”:

The teams of Spiderman W.E.B. Adventure, Avengers Assemble: Flight Force and Mission Equipment, the personnel challenged their Marvel knowledge with trivia hosted by the Disneyland Paris Ambassadors. But the trivia took an epic turn when they had to answer the question: “Which Academy Award winner actress plays the role of Carol Danvers in Captain Marvel?”

It was then that Carol Danvers/Captain Marvel star Brie Larson herself revealed the correct answer to the unsuspecting group.

In a video shared on the official YouTube channel of Disneyland Paris, Larson can be seen tip-toeing through the brand new campus before perching behind a black curtain as she waited for the right moment to carry out her surprise.

The team erupted in applause, and Larson returned the gesture. She expressed deep gratitude for the Cast Members’ hard work before signing off with the Captain Marvel film tagline, “higher, further, faster,” a nod to the comic’s origin. The group then posed for photos in front of the Avengers Assemble: Flight Force attraction, a new, high-speed roller coaster in which Larson reprised her Marvel role.

This is one of the many exclusive events being held ahead of the grand opening of Avengers Campus Paris, which is set to open on July 20, 2022.

In addition to Avengers Assemble: Flight Force, Guests can look forward to experiencing the Spider-Man W.E.B Adventure attraction, the immersive Training Center, the reality-bending menu found in the PYM Test Kitchen, character sightings from more than a dozen of Earth’s Mightiest Heroes, and much more.

A second Captain Marvel film is currently in the works and will be released with the title The Marvels (2023). Most plot details of The Marvels are still being kept under wraps, but we do know that the “follow-up to Brie Larson’s heroic introduction as Carol Danvers is that it will bring several MCU properties together as Danvers joins forces with a few like-minded, super-powered women,” according to ScreenRant.

Are you planning to visit Captain Marvel at the Marvel Avengers Campus in Disneyland Paris this year? Let us know in the comments below!