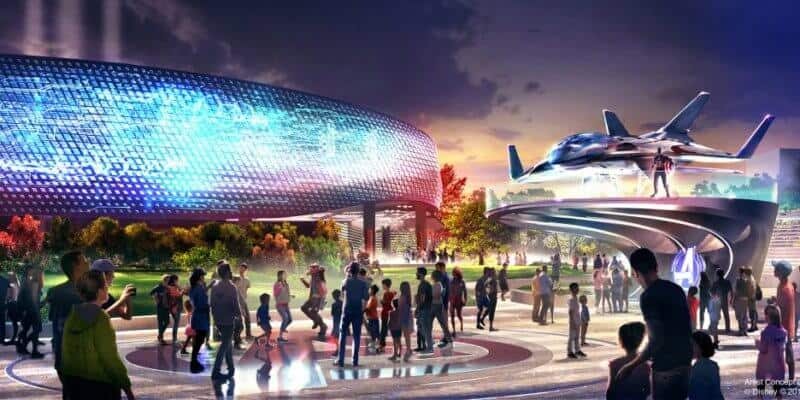 The grand opening of Avengers Campus at Disneyland Paris is less than a month away, and more details continue to be released as the Park prepares for this exciting event.

Avengers Campus will open to the general public on July 20, 2022, and we recently reported that Infinity and Magic Plus Annual Passholders will be able to enjoy exclusive previews of the land from July 16 to July 19 with prior reservation.

It was recently reported that Cast Members would also have exclusive preview events earlier. The first event will be from July 2 to July 7, when Cast Members can experience the land but won’t be allowed to take photos or videos. However, from July 11 to July 14, Cast Members will get a second preview event where they can explore Avengers Campus with their friends and family, with no restrictions as of today.

With the latest update of the Disneyland Paris official app, Guests can now see Avengers Campus on the map of the Park, with the different attractions, characters, entertainment offerings, and restaurants that will be available once the land opens.

The PYM Kitchen all-you-can-eat buffet restaurant, which will open within the @Marvel Avengers Campus, will be 42 € for adults and 30 € for children!

Cast Members and performers continue their training at the land, as we can see on a video posted by Disneyland Paris bons plans (@Disneylandpbp), where performers are practicing their stunts for a show similar to the one in Disney California Adventure.

Stuntmen practice on top of the building that will house the “Spider-Man WEB Adventure” attraction!

Meanwhile, CHILLOWFY (@CHILLOWFY) shared a video where we can hear the audio tests for this same show being run at night. The original video was posted by Theme Park Travellers (@TParkTravellers) on their YouTube Channel, which you can see by clicking here.

[EXCLUSIVE] First look at Avengers Campus at night with the Spider-Man show audio being tested, the video has been taken by @TParkTravellers and you can see the entire video here : https://youtu.be/buL6xDlta4g #AvengersCampus #DisneylandParis30

⚠️ [EXCLUSIVE] First look at Avengers Campus at night with the Spider-Man show audio being tested, the video has been taken by @TParkTravellers and you can see the entire video here : https://t.co/N9pVcE42AW #AvengersCampus #DisneylandParis30 https://t.co/A35CpKaJlV pic.twitter.com/QpxyL3QI2B

We are beyond excited to see Avengers Campus nearer to completion each day and can’t wait to experience a superhero adventure as soon as the land opens its gates.

Are you excited to explore Avengers Campus once it opens? Let us know in the comments below!