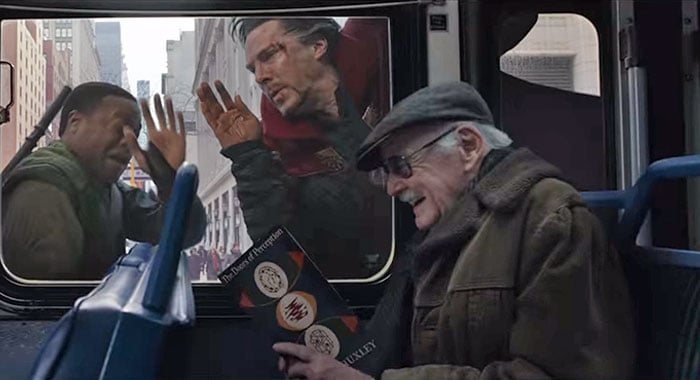 Stan Lee, the founder of Marvel Comics, was born in 1922 and made his famous cameo appearances in 22 Marvel Cinematic Universe films prior to his death in 2018.

We dedicate Avengers Campus to the incomparable

“That person who helps others simply because it should or must be done, and because it is the right thing to do, is indeed, without a doubt, a real superhero.”

Thank you, Stan, for inspiring the hero within each of us. You have made us all True Believers.

Related: Want to Ride Rise of the Resistance or WEB-SLINGERS? Visit on a Weekday!

Avengers Campus is designed to allow Guests to feel as though they’ve stepped into a literal Marvel campus where they could meet any given super hero at any given moment. It does not exist at a specific point in the Marvel Cinematic Universe timeline, unlike the Star Wars: Galaxy’s Edge land, which is set between Star Wars: Episode VIII – The Last Jedi (2017) and Star Wars: Episode IX – The Rise of Skywalker (2019), which limits the characters who can appear.

Join Okoye, the leader of the Dora Milaje, Black Panther’s loyal bodyguards, in training sessions in the courtyard near Avengers Headquarters. Here, you may learn wisdom from Wakanda and participate in a series of strength and skill exercises.

Super Heroes (and possibly even some Super Villains) may be found greeting recruits or engaging in missions of their own, including Iron Man, Captain America, Captain Marvel, Black Panther, Black Widow, Ant-Man and The Wasp, the Guardians of the Galaxy, Thor and Loki — some of whom are making their first appearances at the park.

Related: Check Out the Secrets Behind Pym Tasting Lab

As for Lee, a full list of the films in which the Marvel legend made character appearances can be found below:

Are you glad Avengers Campus has been dedicated to Stan Lee?