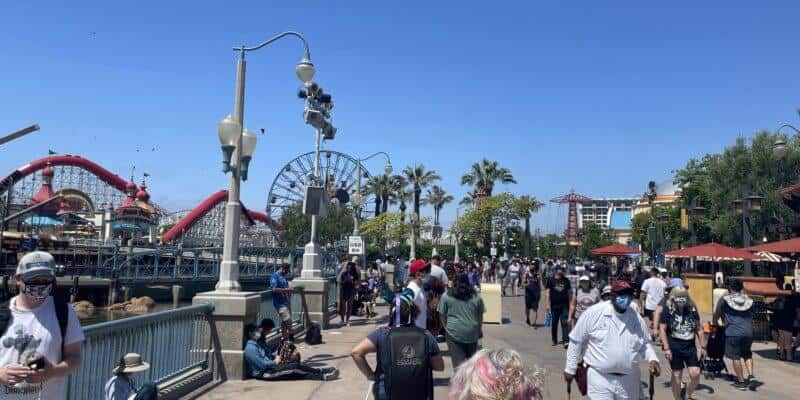 Disneyland Resort fans waited a long time — through the theme park’s entire year-long COVID-19 closure, in fact — for Avengers Campus to open up its gates at Disney California Adventure Park. But, now that the new Marvel super hero land is finally open for business, some Guests are frustrated with how Disneyland is handling entry into the land.

As Disneyland Resort continues its phased reopening process, the Marvel-themed area is currently operating at a limited capacity. The land occupies the area where A Bug’s Land was formerly located, and with it being only six acres in total, Disney is limiting the number of people who are allowed into the land and only utilizing one of the three entrances.

However, instead of using a “boarding group” system to allow Guests to enter the land at designated times each day, such as the one that was used when Star Wars: Galaxy’s Edge opened at Disneyland Park in 2019, Disney has opted to have a standby queue that Guests must wait in once Avengers Campus reaches capacity.

To get the chance to meet Iron Man, Doctor Strange, Black Widow, Black Panther, Spider-Man, Captain America, and other fan-favorite Marvel super heroes, though, Guests who do not gain access to the virtual queue for WEB SLINGERS: A Spider-Man Adventure only have the option of waiting in the standby queue to enter the land. Those who have been opting to wait in this standby queue have noted that it has taken hours to get through a line that often stretches all the way through Disney California Adventure Park — through Hollywood Land, across from Pixar Pier, and even into Grizzly Peak.

Many Guests with disabilities and their loved ones have been particularly frustrated with the standby queue for Avengers Campus, s you can see in the photo below. Guests note that those with disabilities — including both physical and developmental disabilities and disorders, such as Autism Spectrum Disorder — would be unlikely to ever make it into the land if they had to wait in this hours-long queue.

As we have previously reported, when Avengers Campus reaches capacity, the only way to enter the land without waiting in the standby queue at this time is to obtain a boarding pass for WEB-SLINGERS: A Spider-Man Adventure. This attraction is using a virtual queue system very similar to what Guests are used to for Star Wars: Rise of the Resistance at Galaxy’s Edge.

The biggest issue with the standby queue at this time is that Disneyland Resort is not allowing Guests who qualify to use their Disability Access Service (DAS) passes to avoid waiting in a conventional queue environment that could be triggering, or in the case of certain physical disabilities, impossible. The DAS pass allows Guests to obtain return times (much like a FASTPASS) for many attractions and experiences at the Disneyland Resort, but entry into Avengers Campus does not qualify as an experience for which the DAS pass can be used.

According to the Disneyland Resort DAS guide:

Many Disneyland Guests are taking to social media to let Disneyland Resort officials know how they feel about the current entry system at Avengers Campus. One well-known Instagram user, Gothic Rosie, shared her thoughts on the situation:

A good many of you know I’m usually an activist when it comes to these issues at the parks. I’m a chronic disease warrior and have MS…thus my quests are personal too. Like the Pixar Pals gate fiasco.

I’ve been having a rough week though and so I’ve been focused inward during the mess that has unfolded at DCA. A great many of you have constantly let me know of a loophole that has been an off and on type thing (they have actually turned folks away occasionally) and so I have been reluctant to focus my energy on that. One of you, my apologies I have lost your name, pointed out the lack of ADA assistance for entry into Avengers Campus constituted a violation of the ADA.

I decided to read up on the law (lots of tiny and big words to manage) and agree…the lack of accommodation for those whom are disabled and cannot manage a 4-6 hour line (regardless of it being in the hot sun or not) is unacceptable.

Please EMAIL them about this and how it is a violation of Title 3 of the ADA. EMAIL LINK: https://disneyland.disney.go.com/help/email/ and send them this link: https://tinyurl.com/t2466d65 requesting they provide guests with disabilities the same opportunities to visit the new land as the able bodied. If this means we get into the standby line when they open and then someone walks the line FIRST THING to check in with those needing a return time for their current place in line…then they need to do that and figure it out because many disabled guests are feeling ignored and left out.

Disneyland created this mess by not setting up the same Land entry virtual queue system used for SWGE. That system worked perfectly and setting up timed entry makes it so many others get to enter the land and enjoy it too.

This is what is causing the madness to get in every morning at the Harbor entrance. Come on Disneyland you have the tools, use them and fix this.

At this time, Disneyland Resort has not issued a statement about whether or not the current standby queue system at Avengers Campus will be altered in any way. Via the official Disneyland Resort Guest Relations phone line, a Cast Member did confirm, however, that DAS passes are not allowed to be used to visit the Marvel expansion at this time. All Guests who do not obtain a Boarding Group for WEB SLINGERS: A Spider-Man Adventure must wait in the standby queue to enter Avengers Campus if the land is at capacity upon their arrival.

For the latest information, visit the Disneyland Resort official website.

Has the lack of DAS pass access impacted your ability to visit Avengers Campus?