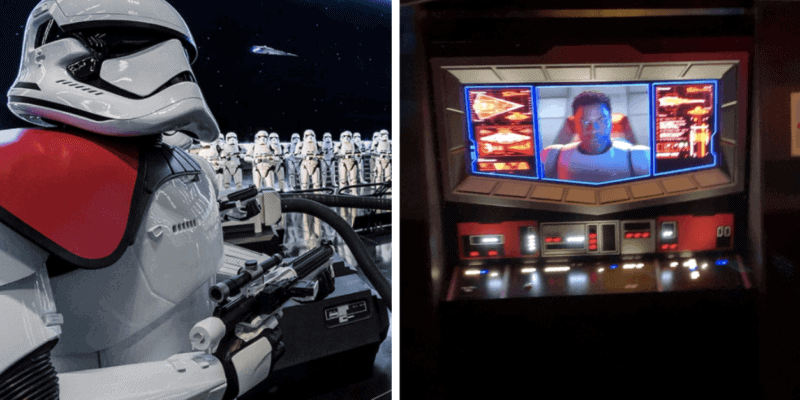 If you’ve ever been fortunate enough to snag a coveted boarding group for Star Wars: Rise of the Resistance at Star Wars: Galaxy’s Edge, you know how incredible this ride is. Arguably one of the most elaborate theme park attractions of all time, the 18-minute-long experience transports Disney Parks Guests into the Star Wars timeline, at the peak of the First Order’s power in the galaxy.

While the ride has a number of cameos from Star Wars sequel trilogy characters, including a hologram of Rey (Daisy Ridley) and an appearance by Poe Dameron’s beloved droid BB-8, Finn (John Boyega) is also someone Guests encounter while on the attraction — if they really pay attention. Riders can sneak a peek of him in his stormtrooper armor hiding behind an AT-AT unit!

This actually isn’t the only place where you can find Finn on the ride. In the hangar, you will catch a glimpse of Finn either hiding behind cargo crates (pictured above) or taking cover by a doorway, depending on which part of the room your trackless ride vehicle moved to. But either way, if you are really paying attention during this rush of a ride as you attempt to find your escape pod, you should see Finn!

And, there is another lesser-known Finn Easter egg that some lucky Rise of the Resistance Guests have gotten to experience! Twitter user Drew the Disney Dude recently enjoyed this hidden gem on the Star Wars ride.

I just had one of the craziest Rise of the Resistance experiences ever! I believe this is the first time this has ever been captured on video. Going to edit it tonight and post it tomorrow. Imagineering truly thinks of everything.

I just had one of the craziest Rise of the Resistance experiences ever! I believe this is the first time this has ever been captured on video. Going to edit it tonight and post it tomorrow. Imagineering truly thinks of everything. ?

Related: Rise of the Resistance Breaks Down, Riders Evacuated Backstage

True to his word, Drew shared a video of his super-rare Rise of the Resistance experience. He posted:

• This dialog features Lieutenant Bek and Finn talking to the R5 Astromech Droids so they can escape the Star Destroyer before it collapses.

• Make sure expand the video to see the captions as well!

Lieutenant Bek: What do you mean you can’t do it? Of course you can!

Bek: Would it help if I told you that deck won’t be there anymore in about five minutes?!

Bek: Yes, listen to your friend.

Bek: I know you didn’t come this far just to give up here!

Bek: Yes, I never doubted you!

Finn: The pod doors are locked? Hey, I thought Bek was handling it! Alright, nevermind…it’s ok…I’ve got the override cord here…somewhere.

Finn: Sorry? Oh! Right. Just let me get that code. Ah! No! I got it! Alright! I got it! Ok, the doors should work. See you on the ground.

• This dialog features Lieutenant Bek and Finn talking to the R5 Astromech Droids so they can escape the Star Destroyer before it collapses.

• Make sure expand the video to see the captions as well! pic.twitter.com/ry6mf14XcN

Related: Another Virtual Queue Being Tested at Disneyland

Have you ever heard Finn’s conversation while riding Rise of the Resistance?

Ready to join the Rise of the Resistance virtual queue for yourself? Let the expert team at Academy Travel help you plan your next magic Disney Park vacation!