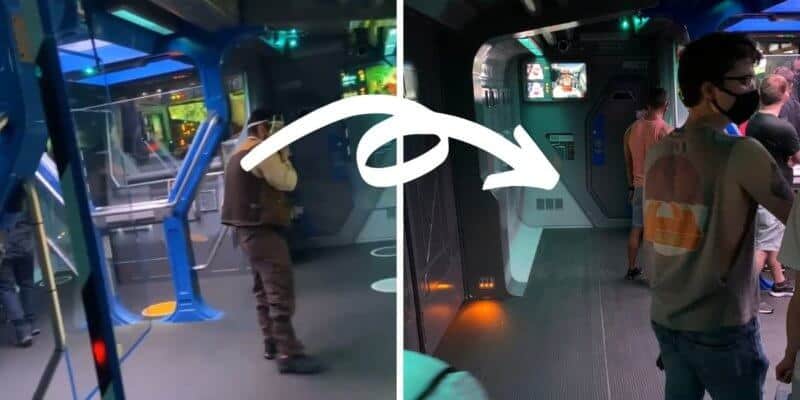 Now, we are also seeing Disney begin to remove plexiglass and social distancing markers in certain queue lines — Specifically, while in the Rise of the Resistance line.

In case you aren’t familiar, the queue line for Rise of the Resistance is all part of the experience. There are several pre-show areas that Guests experience in order to be fully immersed in the storyline of the attraction. Now, we are seeing plexiglass and certain social distancing markers being removed from those pre-show areas.

One Twitter user, who goes by Carter Timberlake, noted that a Cast Member at Rise of the Resistance reminded Guests to stay three feet apart. This is reduced from the previous six feet. Additionally, if you rode Rise of the Resistance during the pandemic, you know that parties were told to stand on a certain color dot in order to keep families and Guests a safe social distance from others while still being able to fill the room to its max capacity. Now, those colored dots have been removed from the transport section of the ride. The Twitter user did note that dots remain at the ride vehicle loading section.

But that’s not all because along with no longer having colored dots within the pre-show areas of the queue line, Guests are also noticing that the plexiglass that was used to help divide up parties are missing from the transport area. You can see this reflected in the photo below, shared by Carter Timberlake on Twitter.

For comparison, you can see the plexiglass in this photo below, as well as the colored dots, taken by our Inside the Magic staff back in January.

Related: When Will Social Distancing End at Disney Parks?

Disney is continuing to reduce social distancing throughout the theme parks as part of their phased approach. Inside the Magic will continue to update you as we see safety protocols be updated at Walt Disney World.

The popular ride, Star Wars: Rise of the Resistance, draws in Guests each and every day as Star Wars fans cannot wait to join the Resistance in an epic battle against the First Order.

Are you excited to see plexiglass and social distancing being removed from certain parts of the theme parks? Let us know in the comments below.