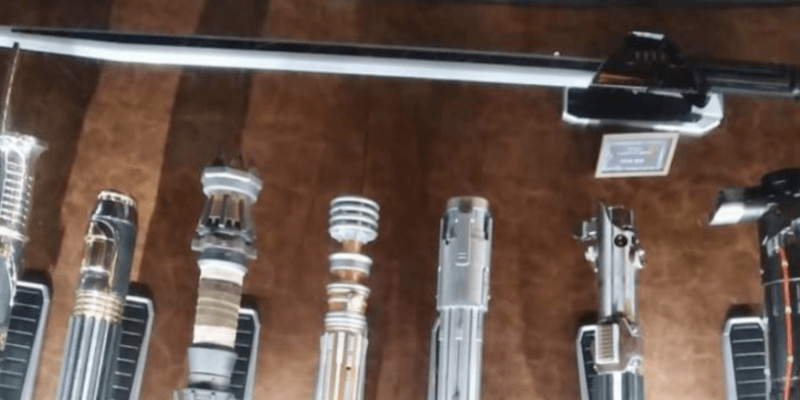 Whether you first became acquainted with the Darksaber as a fan of Dave Filoni’s animated series, Star Wars: The Clone Wars, or in he and Jon Favreau’s Disney+ hit, The Mandalorian, you know how epic this particular lightsaber is.

Now, with no warning, Disney has dropped a surprise Darksaber model at Star Wars: Galaxy’s Edge at Disneyland Resort!

Theme park reporter The Cali Bae shared a video of the incredible new lightsaber on Instagram. The video was captioned:

The Dark Saber has arrived in Batuu @disneyland !!! Cost is $199.99 video from @courageously.red

Paul’s Theme Park Adventures shared another photo of the Darksaber on Instagram, with the caption:

Heres a look at the NEW Dark Saber being sold in Galaxys Edge! Retails for $200. Huge shoutout to @courageously.red for helping me get this Dark Saber!

Per Star Wars lore, this ancient Mandalorian weapon was created by Tarre Vizsla, the first Mandalorian Jedi. In recent Star Wars canon, it has since been wielded by the likes of Sabine Wren (Tiya Sircar) — who found the weapon in Maul’s possessions — Bo-Katan Kryze (Katee Sackhoff), Moff Gideon (Giancarlo Esposito), and Din Djarin (Pedro Pascal).

Moving into The Mandalorian Season 3, it’s likely that the Darksaber storyline will continue as Kryze continues her quest to reclaim her home planet Mandalore.

The black bladed saber that is currently being sold at Disneyland’s Star Wars land looks cooler-than-cool and is sure to make the perfect addition to any Star Wars fan’s personal memorabilia collection.

It has not yet been confirmed if the Darksaber is only available at Dok-Ondar’s Den of Antiquities at Disneyland Resort, or if it can also be found on Batuu at Walt Disney World Resort’s Disney’s Hollywood Studios Park.

Do you want to go buy a Darksaber next time you visit Star Wars: Galaxy’s Edge?

Let the expert team at Academy Travel help you plan your next magical trip to Disneyland Resort or Walt Disney World Resort! Whether you want to sip a galactic beverage at Oga’s Cantina or get a boarding group for Star Wars: Rise of the Resistance, they can help!