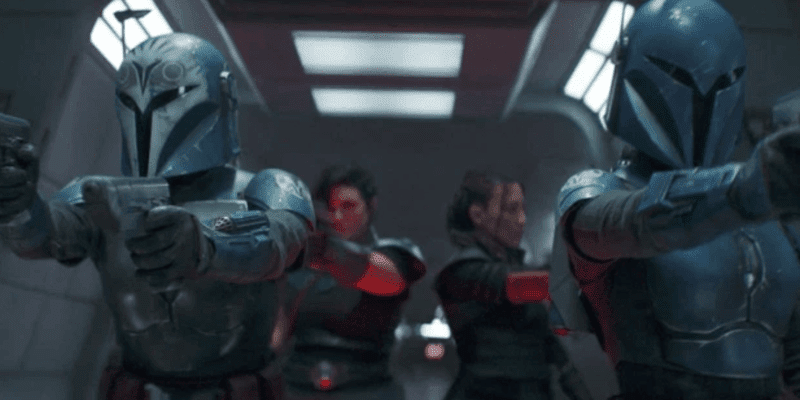 The all-female battle scene in The Mandalorian Season 2 finale episode was epic.

Now, Sackhoff has spoken to Looper about the epic scene, sharing that it was never about girl power, in spite of the comparisons it drew to the all-female Marvel super heroes scene in Avengers: Endgame (2019).

“The reason why that scene at the end of Mandalorian worked was they didn’t talk about the fact that they were women. They were just the best people for the job and they were there. And they did it, and they succeeded. We didn’t stop to be like, ‘Female power, woo-hoo! You take the lead because you’re the prettiest!’ You know what I mean? This was just the crew that was available.”

“I think that what’s changed, not only the genre but in our industry, is that we don’t feel like we have to quantify a female’s existence anymore by saying, ‘Well, she’s a woman, she’s a ‘strong female character.’ We don’t have to do that anymore. Now, it’s just like, ‘Isn’t that awesome to watch? Holy crap, that was amazing.’ That’s not to take away from and negate the fact that they’re obviously women. I think that’s what’s changed the most in the industry — we have so many amazing women to watch.”

Sackhoff knows a thing or two about being a woman in sci-fi. She is, perhaps, best known for her role as Kara ‘Starbuck’ Thrace on Battlestar Galactica, but has also been part of the Star Wars universe for many years.

Recently, Sackhoff confirmed that Bo-Katan’s story in the Star Wars universe isn’t over. In the same Looper interview, she hinted at the character’s future:

“Just because you think you’re right and just because you think you’re the right person to rule, that doesn’t mean you actually are. So I want to see that struggle because if she really does care about her people, she may not be the right person. I think there are so many different places to go, so we’ll have to see what those guys [Favreau and Filoni] have in their minds.”

Although little has been confirmed about The Mandalorian Season 3 — we do know Pedro Pascal will be returning as title character, Din Djarin — the presumption in the Star Wars fan community is that Bo-Katan will be back to finish the Darksaber plot that was left hanging at the end of the second season.

Djarin won the black-bladed saber in battle with Gideon, leaving him the de facto ruler of Mandalore. Since Bo-Katan still wants to avenge her sister, Duchess Satine Kryze’s, death by winning the Darksaber herself, it seems that this part of The Mandalorian saga is far from over.

What were your thoughts on the all-female Mandalorian scene last season? Do you hope to see similar scenes in the Star Wars franchise moving forward?

The Mandalorian Season 3 will air on Disney+ sometime in 2022. It will air concurrently with two spinoffs, Ahsoka, featuring Rosario Dawson as Ahsoka Tano, and Rangers of the New Republic. The Mandalorian’s “next chapter,” The Book of Boba Fett, will debut in December 2021.