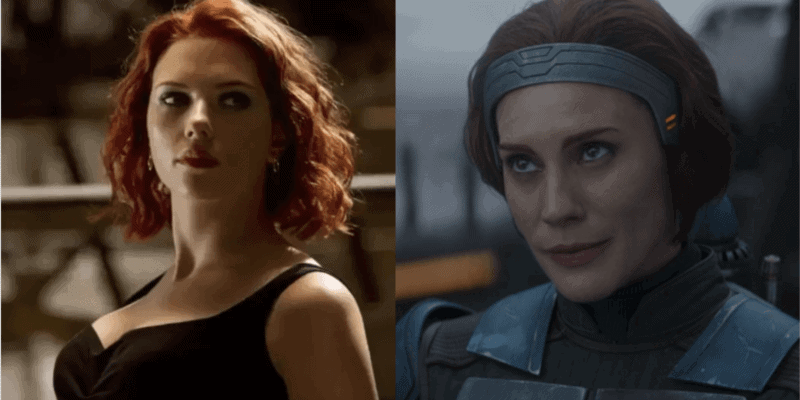 Katee Sackhoff has been making the rounds recently sharing inside details about filming Season 2 of The Mandalorian.

The actress, perhaps best known as Kara ‘Starbuck’ Thrace in Battlestar Galactica, played live-action Bo-Katan Kryze in two episodes of the second season of The Mandalorian last year. She appeared in both “Chapter 11: The Heiress,” directed by Bryce Dallas Howard, and the season finale episode, “Chapter 16: The Rescue.”

In a podcast that debuted today, January 26, 2021, the Star Wars actress shared that she never thought she would get to portray the animated character in live-action — in fact, she assumed Marvel Studios’ Black Widow star Scarlett Johansson would be given the role!

Sackhoff told Inside of You host Michael Rosenbaum:

I’ve had a beautiful career and there have been great things. But, I’ve seen people around me get that big, huge, massive thing and you go “Wow, so proud of them, so excited for them. It’s amazing, ’cause if it happens to someone else, there’s still hope, right, that it can happen to you? But, it never happened to me, like that big, huge thing had never happened, so I always joked…of course they’ll recast it, they’ll probably hire Scarlett Johansson.

But when Mandalorian came out and I saw him [Mandalorian executive producer Dave Filoni, who also worked on Rebels and Clone Wars] at Celebration, I made a joke about Bo-Katan, ya know, wink wink, nudge, nudge. I’ve been playing characters like this for 15 years, buddy…I never really thought it would happen. I was just sort of joking.

Filoni clearly wasn’t joking and it wasn’t long before the long-time sci-fi actress found herself in serious consideration for her personal role of a lifetime. Sackhoff continued, sharing details about the meeting in which Mandalorian creator Jon Favreau, who was “warm” and “amazing” throughout the process, offered her the role.

It was this moment where I was always just joking and when I phone call came in that Jon Favreau wanted to sit down with me, I almost had a heart attack. It took me halfway through that meeting that he was actually talking about me doing Bo-Katan…I remember sitting across from him, just this total out-of-body experience…thinking, ‘Oh, those are pictures of me on the wall’…what is happening?

I still to this day, I’m still pinching myself. My mind is blown…they believed that I could and they ultimately let me.

She praised Favreau for how he handled himself on set, talking about how much she enjoyed working with him on her episodes of The Mandalorian Season 2:

He has this way of giving you direction that is motivating and exciting. Even if it’s a critique on what you did, it does’t come across as a critique…he just naturally does it and it’s beautiful and he’s amazing at what he does.

Although Sackhoff didn’t officially confirm her involvement in the upcoming third season of The Mandalorian, which is set to start shooting on April 5 in Los Angeles, it is extremely likely that Star Wars fans will see her return to the franchise.

The Season 2 finale episode may have seen Din Djarin (Pedro Pascal) complete his quest to deliver Grogu (AKA Baby Yoda AKA The Child) to the Jedi Order — by way of legendary Jedi Knight Luke Skywalker (CGI de-aged Mark Hamill) — but the Darksaber storyline is ongoing.

Although the Mandalorian Season 3 storyline hasn’t been shared — Favreau and Filoni are famously tight-lipped — it serves to reason that it will somehow involve Bo-Katan Kryze trying to win back the Darksaber from Djarin, who himself won it in battle with Moff Gideon (Giancarlo Esposito).

There have also been reports that Bo-Katan Kryze’s sister, Star Wars: The Clone Wars character Duchess Satine Kryze, could appear in live-action for the first time. As a matter of fact, recent casting news for two Star Wars series — Andor and OBI-WAN KENOBI: An Original Series — indicates that actress Denise Gough could potentially play the Mandalorian leader.

It is not yet known how Duchess Satine would play into the Andor story, but it would make sense for her to appear in flackback scenes in the Obi-Wan Kenobi series. The Duchess and the Jedi Knight had a romance that played out in Clone Wars before the Duchess was impaled by Maul.

Whatever happens, don’t be surprised if you see Sackhoff done her beskar armor again sooner rather than later.

Watch Mandalorian star Katee Sackhoff’s full interview on Inside of You below:

Are you hoping to see the Battlestar Galactica alum return to Star Wars to continue Bo-Katan’s story?