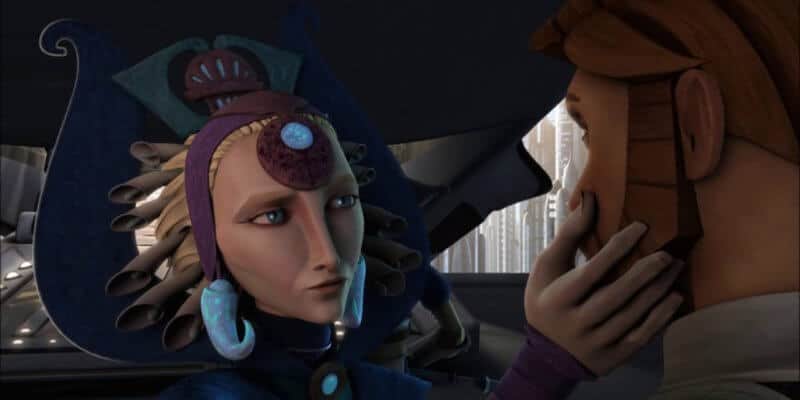 If you know anything about the Jedi Order in the Star Wars universe, you know that one tenet reigned throughout the Skywalker Saga, from the prequel trilogy onward — no attachments.

In Star Wars: Episode III – Revenge of the Sith (2005), Jedi Knight Anakin Skywalker — the man who eventually becomes Darth Vader as a direct result of his emotional attachment to Luke Skywalker and Leia Organa’s mother, Padme Amidala — is speaking to Grand Master Yoda.

Yoda: “These visions you have …”

Anakin: “They are of pain, suffering … death.”…

Yoda: “Careful you must be when sensing the future, Anakin! The fear of loss is a path to the Dark Side.”

Yoda: “Rejoice for those around us who transform into the Force. Mourn them, do not. Miss them, do not. Attachment leads to jealousy, the shadow of greed, that is.”

Anakin: “What must I do, Master Yoda?”

Yoda: “Train yourself to let go of everything you fear to lose.”

Anakin, as all Star Wars fans know, did not heed Yoda’s advice and eventually turned to the dark side of the Force because he was unable to let go of Padme and his love for her.

During this same era of the newly revamped Star Wars timeline — the Fall of the Jedi era — Jedi Knight Obi-Wan Kenobi developed feelings for Duchess Satine Kryze while trying to save her from a violent faction who wanted to undermine the Duchess‘s goals for peace. This romance plays out in Dave Filoni’s animated series, Star Wars: The Clone Wars.

Wookieepedia explains how this relationship progressed during the Mandalorian Civil War after the Jedi Council dispatched Jedi Master Qui-Gon Jinn — famously played in live-action by Liam Neeson in Star Wars: Episode I – The Phantom Menace (1999) — and his Padawan, Obi-Wan Kenobi, to the planet Mandalore to protect Duchess Satine Kryze from enemy factions who had sent bounty hunters to kill her:

At some point, they [Kenobi and Kryze] were attacked by a swarm of venom-mites on Draboon, and Obi-Wan carried Satine to safety. Unfortunately, the chivalric act was tarnished somewhat as the Padawan accidentally fell and dropped her unceremoniously, leaving her with a permanent scar from the fall. During this time, Satine and Obi-Wan began to fall in love and develop feelings for one another.

Wookieepedia’s outline of the heartbreaking relationship between the Jedi and the Duchess continues:

[The] young duchess was left with the difficult task of rebuilding her world. Obi-Wan’s commitment to the Order ended their relationship, and he left to continue his Jedi training despite his feelings for her. Both were left heartbroken by their separation, and Kenobi later admitted that, had Satine asked him to stay, he would have left the Jedi Order for her…

In Clone Wars, Duchess Satine eventually dies in Obi-Wan’s arms after being tragically impaled by Maul. Her last words to Kenobi were, “Remember my dear Obi-Wan, I loved you always… I always will.”

It seems, however, that if Duchess Satine Kryze and Obi-Wan Kenobi had lived 200 years earlier, during the newly introduced Star Wars: The High Republic era, they may have had a legitimate chance at a life together.

In the new Charles Soule novel, The Light of the Jedi, Republic technician Merven Getter sees a coworker reading a book and thinks:

“Probably one of the Jedi romances she was always obsessed with. Merven didn’t get it. He’d read a few — they were all set at outposts on the far Republic frontiers, full of unrequited love and longing glances . . . the only action was the lightsaber battles that were clearly a substitute for what the characters really wanted to do…”

The fact that Jedi romance novels were once popular, and apparently weren’t discouraged to an immense degree, certainly indicates that High Republic Jedi — during the golden age of Jedi culture — were more open to romantic attachments than their prequel trilogy descendants. We may discover more about this as the High Republic publishing initiative continues over the course of the next several years.

For now, suffice to say that Obi-Wan Kenobi and Duchess Satine Kryze could have stood a legitimate chance 200 years earlier.

Could we ever see Satine Kryze in live-action?

The introduction of Duchess Satine’s sister, Mandalorian warrior Bo-Katan Kryze (Katee Sackhoff) in live-action for the first time during the second season of Jon Favreau and Dave Filoni’s hit series The Mandalorian made many fans wonder if we could ever see Satine portrayed in a live-action series as well.

The animated character’s striking resemblance to actress Cate Blanchett has been noted, but there has never been any official confirmation that she is interested in portraying the Star Wars character in a series or movie.

There is, however, the potential for Duchess Satine Kryze to make an appearance in the upcoming Deborah Chow streaming show, OBI-WAN KENOBI: An Original Series. Set approximately ten years after the events of Revenge of the Sith, both Ewan McGregor and Hayden Christensen will be reprising their roles as Obi-Wan Kenobi and Anakin Skywalker/Darth Vader, respectively.

How, exactly, the Duchess would play into the storyline remains to be seen, but it would likely be during a flashback sequence of some kind.

As for Bo-Katan Kryze, she is expected to appear again as The Mandalorian saga progresses on Disney+. Showrunner Favreau has confirmed that the third season of the popular series will air after The Book of Boba Fett, which is slated for a December 2021 release.

It is not yet known which series will follow Bo-Katan and her Nite Owl warriors’ continued quest to retake Mandalore by obtaining the Darksaber — the ancient Mandalorian weapon was won by bounty hunter Din Djarin (Pedro Pascal) in a beskar spear v. Darksaber battle with Moff Gideon (Giancarlo Esposito) in the Season 2 finale episode of The Mandalorian.

The Darksaber, as Star Wars fans know, was originally created by Terre Vizsla — the first Mandalorian to join the Jedi Order — and whoever wields it is the de facto rule of Mandalore. There are some fan theories that Djarin will maintain possession of the weapon, becoming the new Mandalorian ruler by the end of the series.

What do you think? Will we see Duchess Satine Kryze and Obi-Wan Kenobi again somehow? Never say never in the Star Wars universe!