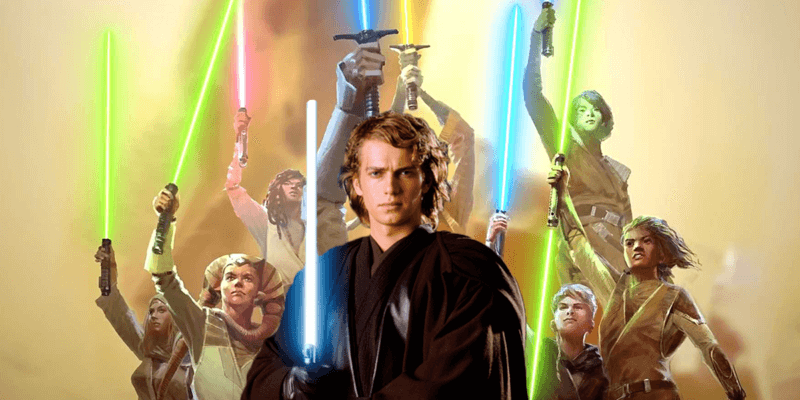 Before Din Djarin (Pedro Pascal) and Grogu (AKA The Child AKA Baby Yoda) were introduced into the Star Wars universe in the hit Disney+ series The Mandalorian, fans were captivated by Anakin Skywalker (Hayden Christensen) and his walk with the Force. Lucasfilm’s prequel trilogy — Star Wars: Episodes I-III — centered around the character development of Anakin Skywalker growing among the Jedi Order as a Padawan and into a mighty Jedi Knight. Though he was regarded as the “Chosen One,” the Jedi failed to understand Anakin’s potential and, ultimately, drove him to his demise.

However, fans are now suggesting that Anakin Skywalker’s fate — he turned to the dark side and descended into Darth Vader — would have been different in the High Republic era.

Lucasfilm/Disney just introduced The High Republic age with three new novelizations. Set 200 years before the start of the Skywalker Saga and 800 years after the fall of the “Old Republic,” the sub-series focus on the height of the Galactic Republic and the golden age of the Jedi Order.

The High Republic Era was a period of time that lasted for around two hundred years between approximately 300 BBY and 82 BBY in which the Galactic Republic was said to be at its height. It was also a golden age for the Jedi, who were significantly more active throughout the galaxy, and a time of expansion and exploration in the Outer Rim Territories.

In Star Wars: Episode I – The Phantom Menace, Jedi Master Qui-Gon Jinn (Liam Neeson) discovers a compelling Force-sensitive child on the desolate desert planet of Tatooine. Qui-Gon is convinced that the young Anakin Skywalker is the prophesied Chosen One who is meant to bring balance to the Force (“not destroy it!).

The Jedi soon misunderstand Anakin. Some go on to disregard his importance throughout the prequels, so much so that Master Mace Windu (Samuel L. Jackson) and Master Yoda (Frank Oz) openly share their doubts of Anakin Skywalker’s true potential. His unbreakable attachments to other beings prove to be his downfall, confirming right Yoda’s first suspicion of Skywalker’s dark future.

As alluded to previously, some Star Wars fans now suggest that Anakin Skywalker’s fall could have been avoided entirely if he were raised in the High Republic Era.

While the Jedi Order believed attachments were dangerous, they were much more lenient than the Jedi Order present in the Skywalker Era. A crucial scene in Charles Soule’s Light of the Jedi highlights two of the central Jedi recalling their intimate times together as Padawans:

Shared moments as Padawans, tolerated and understood and even common – but things to be left behind once one ascended to become an adult in the Order.

As Padawans, they shared common feelings for one another and were able to express those feelings responsibly. Unlike Anakin’s built-up infatuation for Padmé Amidala (Natalie Portman) that boiled over in Star Wars: Episode II – Attack of the Clones, Anakin would have had a mentor from the High Republic Jedi to teach him how to handle his emotions and conduct himself properly to understand boundaries. He would have been surrounded by other Jedi who understood his need for intimacy and could have met fellow Padawans in the same boat. Together, they would let go of that feeling and realized the importance of moving on.

However, if Anakin Skywalker were born in the High Republic Era, he would not have been regarded as the Chosen One since the Force had balance (for the most part) and a Chosen One was not necessary.

The failure to understand the need for attachment and intimacy with other beings very well may have led to the Jedi Order’s destruction, further explaining why Anakin was meant to destroy the Jedi, not save them.

We’ll see Anakin Skywalker in the upcoming Disney+ series KENOBI, starring Ewan McGregor as Obi-Wan Kenobi and Hayden Christensen as Anakin Skywalker. It’s possible we’ll see Skywalker transform into the Sith Lord Darth Vader and Emporer Palpatine (AKA Darth Sidious) begin the implementation of the Empire and Death Star. Many Star Wars fans speculate that there will be flashbacks from Star Wars: Episode III – The Revenge of the Sith, giving a deeper look into Anakin‘s fall to Darth Sidious.

Do you think Anakin Skywalker’s fate would be different? Let us know in the comments below!