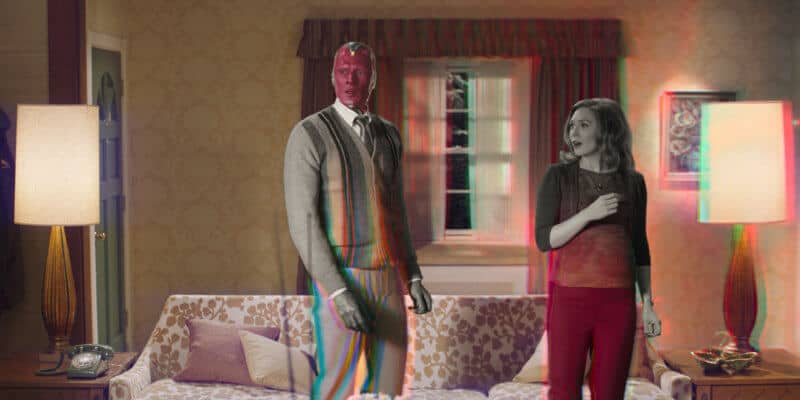 We’re just a few days away from the premiere of WandaVision on Disney’s streaming service, Disney+, and it’s become clear that Marvel Studios head Kevin Feige is just as excited as the fans.

During today’s global press conference for WandaVision to promote the series ahead of its streaming release, the cast and crew dished on what fans can expect from the all-new show and what got them fired up while building Wanda Maximoff  and Vision’s life together on the small screen. Specifically, President of Marvel Studios Kevin Feige shared some insight into what it was like making WandaVision, how the series sets up Phase 4 of the Marvel Cinematic Universe, and even how The Mandalorian got him pumped up for the debut of this new MCU sitcom on Disney+.

Moderator Jaleel White pointed out that this is the first foray into the sitcom genre for the MCU and asked what other projects we can expect, if any, at the sitcom level. Feige responded:

“Well, we’ll see. This was our test run…Marvel, of course, has had a lot of good successful TV in the past. This was Marvel Studios’ first foray directly with cast and amazing characters that we’ve seen in movies coming onto television.

And the idea always was, yes, to do something that could not be done as a feature, that plays with the format and plays with the medium. And there were a lot of meetings before people actually sort of understood what we were trying to go for, and we’re only sitting here because Jac and Matt did and were able to turn a wacky idea into a spectacular show. And we’ve got lots of other things we’ve been asked of that is coming up, but as it all came together, I’m actually very happy and it worked out perfectly that this is the debut on Disney+ for the MCU.”

Kevin Feige was also asked if there was any trepidation with starting Phase 4 of the MCU with a show like WandaVision, or if he thinks Marvel fans are open to it. Feige also answered what WandaVision says about Phase 4 in general:

“Well, I hope it says, you know, get ready for the new and the different. I hope all of our movies have said that one after the other over the years, but certainly with the Disney+ opportunities, it has allowed us to expand creatively what we do. Yes, the original plan was Falcon and the Winter Soldier was going to debut first last year, followed very soon behind with WandaVision. So, creatively, it didn’t reshuffle.

Part of having a long lead plan is having the ability and the ideas of how to shuffle, should the need arise. I’m not saying we were prepped for a global pandemic, we were not. But we’ve always over the past 12, 15 years of Marvel Studios been able to shuffle around. This required no shuffling whatsoever in terms of the creative, just in terms of production.”

The Marvel Studios head expanded on this point, sharing that he believes “the unexpected has often served Marvel Studios well.” He mentioned that one of the things he loves most about WandaVision is that it is meant to only be seen on Disney+:

“…As is often the case, when you’re thrown curveballs…the unexpected has often served Marvel Studios well. And it has served us well in this case, because this show, being our first one, I love how bold it is. I love how different it is. And I love, as I said before, it is something you can only see on Disney+.

We have things that you will only be able to see initially in theaters — and are made for that. And this is very much made to be seen week after week on television, which is very different for us and is very fun and is as bold as it comes thanks to everyone you’re looking at here today.”

As WandaVision kicks off Phase 4 of the Marvel Cinematic Universe, Feige was later asked whether he could share when and where Phase 4 ends, to which is succinctly replied, “No.”

Related: Did Disney Leak a Big Announcement for ‘Black Widow’

If you are an avid Disney+ viewer and a hardcore fan of Jon Favreau and Dave Filoni’s hit Star Wars series, The Mandalorian, then you are aware of the weekly release model for new episodes of television series on Disney’s streaming service. During today’s press conference for WandaVision, one reporter asked Kevin Feige if he took any inspiration from the making of The Mandalorian, and Feige mentioned that something he admires most is the weekly episode releases, as they allow for fans to continue a discussion of a series as new episodes hit the streaming service.

“We were well underway on WandaVision long before we saw The Mandalorian. There is lots and lots of The Mandalorian that has inspired us at Marvel Studios, not in the least of which is the stagecraft technology that they pioneered that we’re using on some upcoming projects…

It was wonderful to see the amazing job that Disney did and Disney marketing did in eventizing that. One of the things that I was always concerned about was to say anything that we do we want to eventize, we want to make people understand that these projects on Disney+ are as important as the projects going into theaters, and we want to feel that same excitement. The Disney marketing team’s the best in the world — the best of all time, frankly, the group running it — that can do that. And they certainly showed that they can do that spectacularly on Disney+ with Mandalorian.

And also, the fun week-to-week, the discussion — which, I guess, happens on all week-to-week television but sometimes series drop all at once on streaming services. And Disney, I think was very smart to do the week-by-week, ‘cause that conversation that happens every week between episodes I think is very important and frankly just a lot of fun. And so each time I witnessed that and experienced that and joined in that with Mandalorian, it got me excited for WandaVision — we had already been building WandaVision to be unveiled.”

Kevin Feige’s connection to the Star Wars universe goes beyond being a fan of The Mandalorian. As we’ve continued to report, Feige has his own Star Wars film in the works, though very little is known about the film at this time.

WandaVision stars Elizabeth Olsen as Wanda Maximoff, Paul Bettany as Vision, Teyonah Parris as Monica Rambeau (introduced to audiences in Captain Marvel), and Kathryn Hahn as Agnes, the nosy neighbor. Randall Park reprises his role as Jimmy Woo from Ant-Man and The Wasp, and Kat Dennings reprises her role as Darcy from Thor and Thor: The Dark World.

Comments Off on Kevin Feige: ‘WandaVision,’ ‘Mandalorian,’ and Future of MCU on Disney+