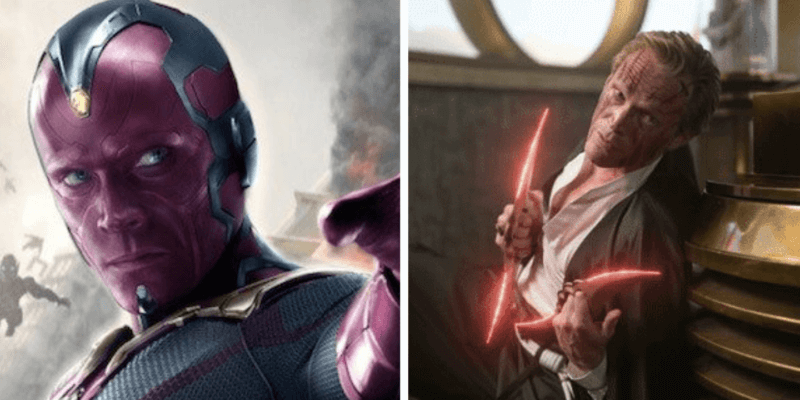 Actor Paul Bettany (A Knight’s Tale (2001), A Beautiful Mind (2001), Master and Commander: The Far Side of the World (2003), The Da Vinci Code (2006)) has played parts in two major fandoms in recent years, starring as superhero Vision in the Marvel Cinematic Universe and as underworld villain Dryden Vos in the Star Wars galaxy.

Bettany has recently been making the rounds to promote upcoming Disney+ Marvel Studios series, WandaVision, which is set to make its debut on January 15 — it will be the first Marvel project to release in nearly 600 days amid the coronavirus pandemic, so Marvel fans are nearly electric with excitement for the retro-themed show.

WandaVision has received fantastic early reactions from critics and entertainment media websites. The show’s official description reads that it:

Blends the style of classic sitcoms with the MCU in which Wanda Maximoff [superhero Scarlet Witch, played by Elizabeth Olsen] and Vision -two super-powered beings living their ideal suburban lives-begin to suspect that everything is not as it seems.

Related: What If Harrison Ford Was in ‘Solo’? This DeepFake Makes It Happen

Previously, before taking on WandaVision’s vintage view of classic sitcoms and idealized suburban lives, Bettany has appeared as Vision in a number of MCU films, including Avengers: Infinity War (2018), Captain America: Civil War (2016), and Avengers: Age of Ultron (2015).

Unsurprisingly, however, talk has turned to Star Wars during some of Bettany’s interviews of late. He made his debut as Vos in Solo: A Star Wars Story (2018) and, as it turns out, would love to have the opportunity to reprise the character.

YouTube channel Jake’s Takes interviewed both WandaVision stars — Elizabeth Olsen and Bettany — and asked Bettany which of his characters he would most like the opportunity to play again. The Marvel and Star Wars actor replied:

It’s interesting that Bettany brings up Vos now, as rumors have been flying that Disney and Lucasfilm are considering a Solo series focusing on Maul (Ray Park/Sam Witwer) and his Crimson Dawn crime syndicate.

This also tracks with the rumors that Alden Ehrenreich — who played a young Han Solo in the standalone Star Wars film — is being asked to return to a galaxy far, far away. We could also, potentially, see Qi’ra (Emilia Clark) and young Lando Calrissian (Donald Glover) return in a Solo-centric streaming show.

Glover has also hinted on social media that he will be coming back for the recently announced Lando mini-series, which was one of Lucasfilm’s Walt Disney Company Investor Day reveals.

It is not known when in the overall Star Wars timeline a Solo/Crimson Dawn series focused on the criminal underworld would take place.

CBS-owned ComicBook.com shared these details about Vos’s story arc in the 2018 film:

When a plot to make off with unrefined coaxium and Vos’ money failed, Solo’s double-cross nearly got him killed at the villain’s hand; Qi’ra rescued the smuggler by slaying Vos with his own laser-daggered weapon.

Solo director Ron Howard — whose daughter, Bryce Dallas Howard, has directed episodes in both seasons of Jon Favreau and Dave Filoni’s hit series, The Mandalorian — has stated that a Solo 2 sequel is unequivocally not in the works. He did, however, recently share details about the potential for a Disney+ series.

“No rumblings [about a sequel]. This is not a spoiler or anything, but I think there is interest in those characters,” Howard told the Lights, Camera, Barstool podcast in November. “I think there’s interest in the gangster world somewhere down the line. But I can assure you there is nothing being developed right now for a movie or Disney+. But, one great thing is there has been a lot of affection shown for Solo, and so of course that keeps boding well for them to eventually turn it around.”