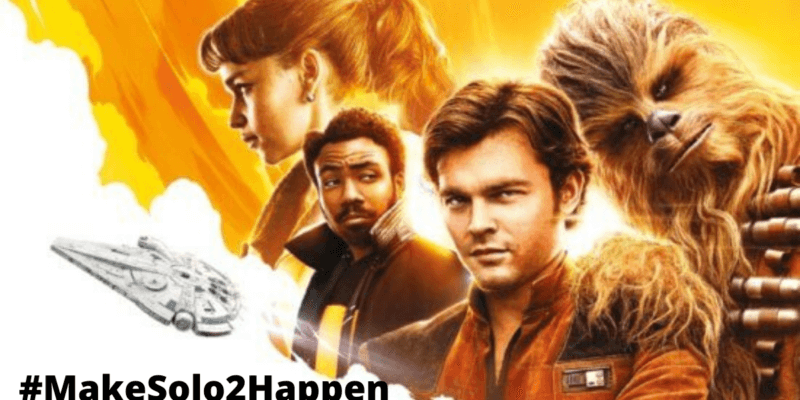 It appears there are still some Star Wars fans out there who remain tied to the mix-reviewed standalone film, Solo: A Star Wars Story. In fact, there are a lot of them.

Today we noticed that #MakeSolo2Happen was trending on Twitter as fans gathered digitally to celebrate the second anniversary of Han Solo’s origin story.

Some fans posted their own reasons for the film’s necessity. Those reasons include:

But unlike most Star Wars fan movements, unfortunately, one comment on the overall trend spoke its positivity.

Twitter user @PeterSciretta said, “The #MakeSolo2Happen group of fans is filled with positivity. I’ve tweeted that a Solo sequel movie is unlikely and was not attacked by mobs calling me names. While Star Wars fandom has its toxic pockets, the people in this movement are what I love about Star Wars fandom.”

The #MakeSolo2Happen group of fans is filled with positivity. I’ve tweeted that a Solo sequel movie is unlikely and was not attacked by mobs calling me names. While Star Wars fandom has its toxic pockets, the people in this movement are what I love about Star Wars fandom. ❤️

Solo: A Star Wars story was a highly-anticipated and arguably ill-fated film. It was the worst-performing Star Wars film of all time.

Director Ron Howard, who was brought in midway through production blamed timing and internet trolls for the failure saying, “Whatever millions [Solo] made worldwide, those were the core fans, but it didn’t hit that zeitgeist point, for whatever reason. Timing, young Han Solo, pushback from the previous movie, which I kept hearing was maybe something. And some trolling, definitely some trolling. Some actual aggressive….”

If the original film’s performance would not be keeping it from getting a sequel, co-writer Jon Kasdan also admitted he didn’t have a good feeling about it because of so much Star Wars focus is elsewhere.

Kasdan said in April, “Don’t think anyone’s pursuing a Solo sequel at the moment…I think a feature, at this point, would be a tough sell & the D+ Star Wars slate is really…pretty packed, all shows I’m lookin’ forward to. My work on Indy is long over but I’m excited there’s forward movement!”

On top of that, the actors’ schedules aren’t helping make this sequel happen as a feature or Disney+ Original content. According to a Forbes article, the young Han Solo, Alden Ehrenreich, is in the middle of a project Disney+ competitor, Comcast’s Peacock streaming service, and the young Lando, Donald Glover, is currently FX’s series Atlanta as well as his own music career.

Still, who knows? A new hope can emerge from anywhere.

Do you think there should be a sequel to Solo: A Star Wars Story? Let us know in the comments!

Comments Off on #MakeSolo2Happen Trends on Twitter as Fans Defend “Solo: A Star Wars Story”