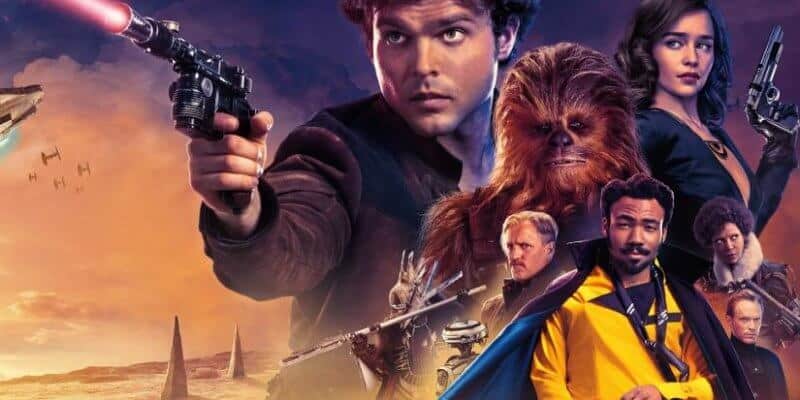 I can’t believe it’s almost been two years since the Solo movie was first released. Although it had many Star Wars fans up in arms in anger (what Star Wars film doesn’t do this?), I actually loved the film and thought it was fun and set up perfectly for a sequel. The fact that we could have had Darth Maul properly return to the big screen is just an incredible thought.

While the box office didn’t perform how Disney would have liked, many fans have been asking for a sequel to find out what happens next and while there have been many rumors of one coming to Disney+, the co-writer of the original Solo movie, Jon Kasdan, doesn’t think the future of the movie is very likely.

He took to Twitter to explain his thoughts on the future of the movie:

Don't think anyone's pursuing a Solo sequel at the moment @KenobiJj I think a feature, at this point, would be a tough sell & the D+ Star Wars slate is really…pretty packed, all shows I'm lookin forward to. My work on Indy is long over but I'm excited there's forward movement!

What’s interesting about this Tweet is how Jon refers to the “packed” slate of Star Wars coming to Disney+. We know of a few shows on the way but don’t really see how the release of the Obi-Wan or  Cassian Andor Rogue One spin-off would get in the way of future Solo outings. The Mandalorian also takes place ahead of any of the previously mentioned shows so it isn’t as if the timeline would be interrupted.

My theory is that the Obi-Wan series will see a return of Darth Maul on the small screen and will in some way continue the story of Han Solo (Alden Ehrenreich), Lando Calrissian (Donald Glover) and Qi’ra (Emilia Clarke). While I don’t think many (if any) of the original cast will return, I do think we will see a Solo sequel play out in the Obi-Wan series in the form of a continued story.

Darth Maul is, of course, Obi-Wan’s biggest adversary after being chopped in half during the events of The Phantom Menace and returning during The Clone Wars animated show.

All that being said, many Star Wars fans (myself included) would like to see Lando, Han, Chewbacca and the rest of the gang return in an official sequel.

Would you like to see a Solo sequel or are you happy for events to play out in other Star Wars shows? Let us know in the comments below!