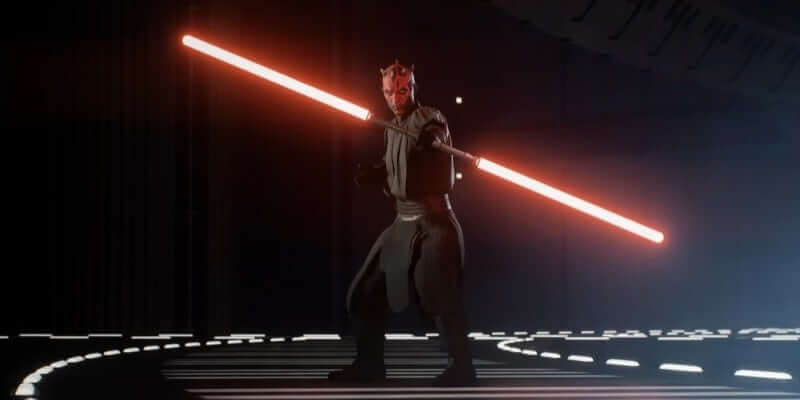 If there’s one thing Santa did not bring all the good little boys and girls in the galaxy this year–besides a version of The Rise of Skywalker that everybody loves–it would be more Darth Maul. But this big man might just be taking his time with this one.

It was reported that a Darth Maul series for Disney+ is being prepped right now. Rumors say it will take place acter his cameo in Solo and use flashbacks to focus on the Sith Lord’s backstory.

The Adventures of Darth Maul

From his dual-bladed introduction in The Phantom Menace to his final demise in Star Wars Rebels, Darth Maul is arguably one of the most interesting and most adventuring characters in the prequel era.

So everybody reading this can have easy access to more details, we’re going to be nice and just use the movie/TV canon! It’s a lot easier and low-key to go to Disney+ for TV episodes than to force them to go diving through comic shops.

After Obi-Wan cuts him in half at the waist, and we watch him fall in Naboo, people assumed the horned Sith Lord to be dead. But then we discover he is still alive on a garbage planet with one foot over the line of insanity. Maul is brought back to his homeworld, Dathormir, by his brother Savage Opress (pronounced “sa-vāge, O-press”) and the force-wielding witches of Dathomir restore Maul to a more honorable state with droid legs.

Maul then embarks on a mission of revenge with his brother. Together they take over the planet Mandalore and become so powerful that the evil Darth Sideous must personally intervene. For there are only two Sith. No more, no less. A Master and an Apprentice.

Sideous kills Opress, and Maul escapes. But Maul becomes less of an official Sith Lord and more like a force-wielding crime boss who practices the ways of the Dark Side. We see this as he rallies pirates and the Mandalorian tribe, Death Watch, to his cause, and when we discover him to be the leader of the crime syndicate in Solo.

Maul returns to us in Star Wars Rebels when Ezra finds him at the Sith Temple. Maul sparks Ezra’s temptation to the Dark Side. Through his interactions with Ezra, Maul learns that Obi-Wan is still alive. He hunts down the Jedi that struck him down but falls once again. Maul finally meets his ultimate demise on Tatooine.

But we have no idea how he goes from being a crime lord to the creepy loner we find in Star Wars Rebels. It will be interesting to see what elements they bring in from the comics and what new ideas they create.

What could we expect from Maul’s Backstory?

It’s going to be dark. Really dark. One needs only to look at Darth Maul to see that. Maul comes from the planet Dathomir. It is a hellish planet ruled by a coven of force-wielding witches called the Nightsisters. The Clone Wars episodes on Dathomir are some of the scariest in the series. They favor the Dark Side and have an evil ferocity about them.

To tell this story right, especially in live-action, Disney+ will have to push the limits of its “family-friendly” standards. But one thing that must happen: Ray Park returns to reprise the role.

What do you think? What are you hoping for in a Darth Maul series? Let us know in the comments!