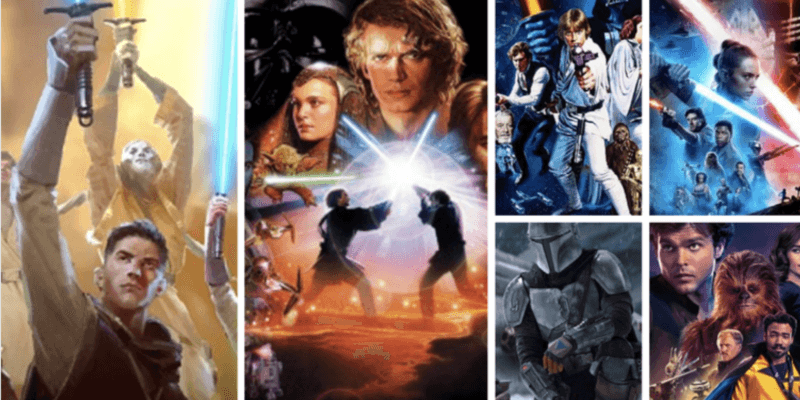 This week, with the launch of highly anticipated The High Republic publishing initiative — which is set to take fans into a world 200 years before Star Wars: Episode I – The Phantom Menace (1999) in which the Jedi Order is revered and the people of the galaxy love these superhero-like protagonists — the Star Wars timeline has been officially expanded.

The new version of the timeline can be found in Justina Ireland’s new The High Republic novel A Test of Courage and online. Here, we take a look at each era, complete with new branding and a unique logo straight from Lucasfilm.

The High Republic — the golden age of Jedi culture — is the oldest era in the newly expanded Star Wars timeline. During this era, when the Jedi Order reigned supreme and Master Yoda was already teaching young Padawans, there was peace throughout the galaxy and expansion into the Outer Rim — where fan-favorite planets like Tatooine and Batuu, of Disney Parks’ Star Wars: Galaxy’s Edge land –, are located.

The Fall of the Jedi

Reign of the Empire

The Reign of the Empire is the age in which Imperial forces reign supreme throughout the galaxy. Solo: A Star Wars Story and the upcoming Disney+ streaming animated series The Bad Batch are both set during this era. Some of the Star Wars universe’s most familiar characters, including Han Solo (Alden Ehrenreich in Solo), Lando Calrissian (Donald Glover in Solo), and Chewbacca (Joonas Suotamo in Solo), were having adventures during this time period before the Rebellion began in earnest.

Animated series Star Wars Rebels — featuring characters like Mandalorian Bo-Katan Kryze (Katee Sackhoff), and Rogue One: A Star Wars Story (2018) — also fall into the Age of Rebellion era. It is important to note that Dave Filoni has previously stated the end of Rebels “potentially” overlaps with The Mandalorian, so this series may extend into The New Republic age.

During this period, the former Rebel Alliance has formed a new government, based on the core planets. This has left the Outer Rim Territories largely at the hands of the Imperial remnant, led by warlords like Moff Gideon (Giancarlo Esposito). Right now, The Mandalorian Season 1 and Season 2 are the only parts of a series that take place during this era, but it’s three confirmed spinoffs — Ahsoka, Rangers of the New Republic, and The Book of Boba Fett — will soon be joining it alongside The Mandalorian Season 3.

Rise of the First Order

View the entire new official Star Wars timeline below and, remember, with numerous new series and movies — including Patty Jenkins’s Star Wars: Rogue Squadron (2023) and Taika Waititi’s unnamed film — coming down the pipeline, the timeline is likely to only continue to expand over the next few years.

What are your thoughts on the new, expanded Star Wars timeline? What other eras would you like to see explored?