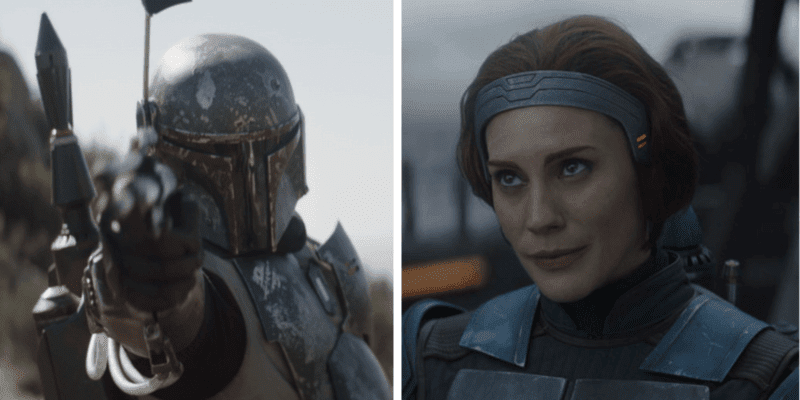 The Mandalorian Season 2 finale opened a lot of doors in regards to future spinoff storylines.

Our previous coverage of the series reads:

After depositing Din Djarin (Pedro Pascal) and his crew of unlikely heroes — including Cara Dune (Gina Carano), Bo-Katan Kryze (Katee Sackhoff), and Grogu — Fett and Shand left in Slave I and weren’t seen again until the post credits scene that took us back to a very familiar Tatooine location, Jabba the Hutt’s palace.

This show, The Book of Boba Fett, is the “next chapter” of The Mandalorian saga within the Star Wars universe will debut in December 2021 according to Mandalorian creator and showrunner Jon Favreau.

Star Wars fans are already developing opinions about the series — and one of them involves aforementioned Star Wars Rebels and Star Wars: The Clone Wars character Bo-Katan Kryze, who made her live action debut in The Mandalorian Season 2, Episode 3 (Bryce Dallas Howard’s “Chapter 11: The Heiress”).

During her initial appearance, Kryze and her Nite Owl warrior explained some of the differences in Mandalorian culture to Djarin — who was taken in by the rigid Children of the Watch as a foundling — leading him to eventually understand that wearing his Mandalorian beskar helmet at all times was not the only way to be an honorable Mandalorian warrior.

Although it has been presumed that Kryze’s storyline will follow the Darksaber in The Mandalorian Season 3, rather than in a spinoff series — the ancient Mandalorian weapon won by Din Djarin (Pedro Pascal) in an epic Darksaber vs. beskar battle battle between Moff Gideon (Giancarlo Esposito) — Favreau and executive producer Dave Filoni have certainly surprised fans before and are sure to again.

Let’s take a look at what some Star Wars fans are calling for on social media:

Are you allowed to announce you are coming back for book of Boba Fett?

If she does , I hope she kills that clone [referring to Boba Fett].

Bo would have his head on a pike in short order Boba is a second rate punk from the start Bo Katan is a battle hardened warrior , fighting for Mandalore from the time she was a teen.

Are you allowed to announce you are coming back for book of Boba Fett?

manifesting if we don’t see mando s3 until 2022 I hope at least we see din djarin appear in some of book of boba fett tryna [sic: trying to] not to get sniped by bo katan or smth [something]

Related: Temuera Morrison Waited Years to Get the Call From ‘Star Wars‘

Depending on exactly where in the Star Wars timeline The Book of Boba Fett falls — many wonder if it will be a prequel following the Sarlacc pit incident in Star Wars: Episode VI – The Return of the Jedi (1983) — Bo-Katan could, potentially, make an appearance after she originally lost the Darksaber to Gideon after obtaining it from Sabine Wren (voiced by Anna Gray). Precisely how that occurred has still not been fully explained in The Mandalorian.

If, however, fans call for Kryze to kill the iconic bounty hunter are heard by the creative team behind the show, there’s no way it could be a prequel series. Since Boba and his Mandalorian armor appeared in the second season of The Mandalorian — which takes place about five years after Return of the Jedi — Jango Fett’s son clearly survived that long.

Regardless, there is certainly the potential for character cameos throughout the interconnected Mandalorian saga — including both the main show and all of its various spinoffs — and, one thing is certain, whether we next see Bo-Katan Kryze pop-up with Temuera Morrison’s Boba Fett, Rosario Dawson’s Ahsoka Tano, or another character altogether, she is sure to make waves in any Star Wars series.

Lucasfilm President Kathleen Kennedy even announced that a cumulative streaming event of some sort will take place once the third season of The Mandalorian, Ahsoka, and Rangers of the New Republic have aired, presumably sometime in 2022.

What do you think? Will Bo-Katan Kryze kill Boba Fett? Or, at the very least, will she appear in The Book of Boba Fett series?