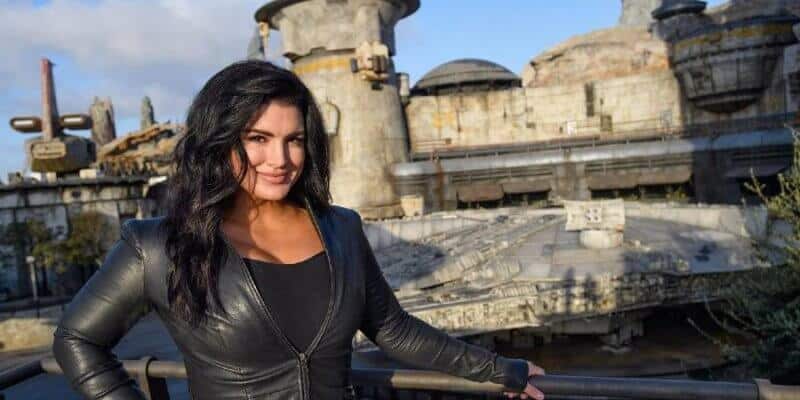 Gina Carano — the actress who plays Cara Dune on hit Disney+ series The Mandalorian — has seen far more than her fair share of controversies in recent weeks.

Since the second season of The Mandalorian began, Carano has been vocal about her feelings regarding various social and political issues on social media. Although she can certainly use her personal platform to share whatever she wants to post, many of her viewpoints have divided her followers and other Mandalorian fans around the web.

Carano’s opinions, particularly regarding face masks and the coronavirus vaccine, have been divisive. This has, as one might expect, led to a great deal of press for the Star Wars actress — not all of it positive. One recent post [below], garnered over 38,000 likes, but also sparked the hashtag #FireGinaCarano to trend across the social media platform.

Now, Carano has risen to the number two spot on IMDb’s StarMeter chart. This list ranks film and television celebrities by how popular they are at any given time. Carano currently ranks directly behind Anya Taylor-Joy, the lead actress in the ultra-popular Netflix series, The Queen’s Gambit.

The controversial actress ranks several spots above Pedro Pascal, who is the title star of The Mandalorian. Pascal has previously shown support for his co-star on social media.

Perhaps the most intriguing thing about Gina Carano’s rise to fame is that she isn’t the most prominent character in Jon Favreau and Dave Filoni’s hit Disney+ series — Pascal’s Din Djarin, for example, has significantly more screen time and, yet, he is not nearly as popular in terms of internet chatter.

This is unfortunate, actually, since most of the people who are talking about Carano online are only focusing on her controversial posts, rather than the exceptional storytelling behind The Mandalorian. The series has given Star Wars fans the authentic experience many feel the franchise has been lacking since Star Wars: The Empire Strikes Back (1980) debuted.

The Mandalorian Season 2 has, in some ways, been overshadowed by Carano’s divisive online presence, almost in the way that Star Wars: Episode VIII – The Last Jedi (2017) divided fans. People are struggling to see the forest for the trees and the story of The Mandalorian is suffering for it — for example, Lucasfilm recently announced 10 new Disney+ Star Wars series at Disney’s Investor Day event.

Among these are two Mandalorian spinoffs — Ahsoka and Rangers of the New Republic. Ahsoka, of course, is set to feature Rosario Dawson reprising her live-action portrayal of the Star Wars: The Clone Wars and Star Wars Rebels animated character, presumably searching the galaxy for Grand Admiral Thrawn.

Rangers of the New Republic, however, hasn’t been outlined in great detail at this time. It could, potentially, be the rumored Cara Dune spinoff — she became a New Republic Marshal this season — but the controversy surrounding her has become more popular than even the idea of a show dedicated to her character, which should arguably be the focus of the majority of the press about the former women’s MMA star at this time.

Carano herself has unsurprisingly posted about her sudden rise on the IMDb StarMeter. She wrote:

My friend, “Gee!! Your number 2 on the IMDB star meter even though the Hollywood press ran a whole smear campaign on you and you didn’t do one interview. Congrats you’re kicking ass!!!” I guess it’s all about perspective. #ShamelessSelfpromoMonday

My friend, “Gee!! Your number 2 on the IMDB star meter even though the Hollywood press ran a whole smear campaign on you and you didn’t do one interview. Congrats you’re kicking ass!!!” ?? I guess it’s all about perspective. ?❤️ #ShamelessSelfpromoMonday pic.twitter.com/tVDf9AwvTx

What are your thoughts on Gina Carano?