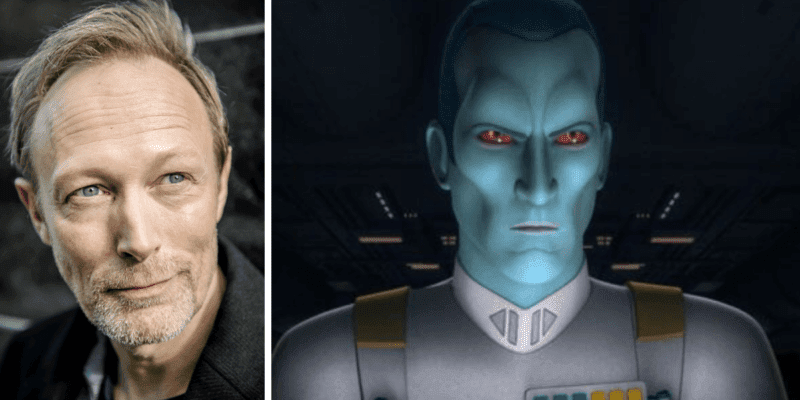 A new casting story has been churned out by the proverbial Star Wars rumor mill. This time, it concerns Grand Admiral Thrawn and who is reportedly set to play him in his live-action debut.

It is now being reported Thrawn’s original voice actor from the animated TV series Star Wars Rebels, Lars Mikkelsen, be the one tasked with bringing the blue villain to life in live-action.

According to the culture site Small Screen, two sources, who remain nameless came forward to “confirm” that Mikkelsen is up for the role and is currently in talks with Lucasfilm.

“Lucasfilm is currently in talks with Lars Mikkelsen to play Thrawn in live-action. This will be for a future season of their hit Disney Plus Star Wars show, The Mandalorian,” one source said.

“Yes. I can confirm that Lars Mikkelsen is currently deep in talks with Lucasfilm and Disney to play Thrawn in live-action. My information is that he will be debuting in The Mandalorian and then appear in a future spinoff Star Wars live-action series. Early days though,” said another.

However, there has been no official word from Lucasfilm or Disney confirming or denying that Grand Admiral Thrawn will make an appearance (either in The Mandalorian or the Ahsoka-Tano-centric spinoff series) let alone who which actor will be chosen to play him. So, this piece should be taken with a grain of salt.

Recently, this reporter put forth his own preferred “shortlist” of actors who could pull off Grand Admiral Thrawn, and while Mikkelsen was admittedly not one of them, it makes sense. After all, not only was he the one who first brought Thrawn to life as a cartoon, but he also fits the overall physique has proven himself a fantastically fiendish bad guy. Specifically when he played Charles Augustus Magnussen in BBC’s Sherlock with Benedict Cumberbatch.

But, again, this remains a rumor, and we at Inside the Magic will update our readers as any confirmed information comes to light.

Who do you want to see play Grand Admiral Thrawn? Let us know in the comments!