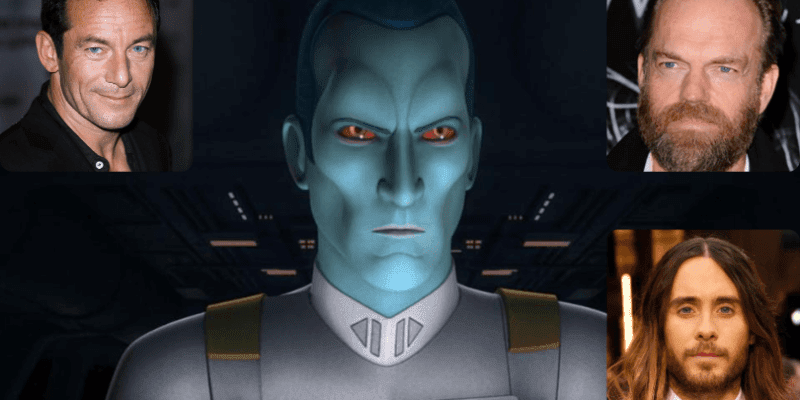 If “Chapter 13” of Disney+’s hit show, The Mandalorian teased anything it was the introduction of villainous Grand Admiral Thrawn into the live-action realm of the Star Wars universe.

While there has been no official confirmation from Lucasfilm, Disney+, or Dave Filoni or Jon Favreau, the revelation that Ahsoka Tano is on the hunt for Thrawn appears to strongly suggest that we could see this character’s return. But one of the biggest questions left is who should play him?

For those who have not seen the animated Star Wars TV show, Star Wars Rebels, Grand Admiral Thrawn is one of the coldest, sinister, and most brilliant antagonists in the saga. He is a tall, thin, blue humanoid creature with deep red eyes and sharp edges. He carries himself in a very stoic, too-smart-to-be-sane fashion, and his voice is mostly kept at a soft icy tone.

I believe he needs to be played by an actor who can not only match his physical appearance but also convey his sinister, stoic persona. It is with these thoughts in mind that I see three actors best fit to introduce Grand Admiral Thrawn to live-action Star Wars: Jason Isaacs, Hugo Weaving, and Jared Leto.

For almost two decades Jason Isaacs was known to the world as the despicable Lucius Malfoy in Warner Bros.’ Harry Potter films. But outside of that single role, I have noticed that Isaacs has kept to similar characters with a cold, elitist attitude. Two particular roles that stand out in terms of his skill at playing the villain are Col. William Tavington in Rolan Emmerich’s The Patriot, and the Emperor in Netflix’s The Dark Crystal: Age of Resistance. Isaacs has also already lent his voice to Star Wars: Rebels, playing the Inquisitor. He also played Captain Gabriel Lorca in Star Trek: Discovery.

I believe Isaacs’ eligibility for this role shines most through his combination of a commanding presence, intense damning gaze, and sharp tone of voice.

Here is another actor who, I believe, has mastered the cold, calculated leader. After all, Hugo Weaving was the man who brought the elf-king Elrond to life for both The Lord of the Rings and The Hobbit trilogies as well as Agent Smith in The Matrix saga. Both characters maintain a very stoic, unapologetic nature. It is also through these roles that we see Weaving perfect the soft near-whisper speak that carries hints of elitism and detachment portrayed by Thrawn. Weaving also has a foot underneath the Disney umbrella by playing Red Skull in Marvel’s Captain America: The First Avenger.

This choice, I will admit, is a bit of a stretch. Leto is much younger than Thrawn is supposed to be, and doesn’t carry the same level of larger-than-life command as the other two do. But I am not ruling him out. I think there is a chance that this method actor could turn to a whole new gear and give Star Wars audiences a performance even more terrifying than we would ever expect.

I see Thrawn as an antagonist evil to the core, whose very presence sense chills down your spine, and whose silvery voice and stare can barely hold back the purest form of madness. His complete apathy leaves him with no limits and keeps me on the edge of my seat in anticipation of what unpredictable thing he might do. All three of these actors have proven that they are up to that challenge.

Again it is not clear if Grand Admiral Thrawn will even show his face in this season of The Mandalorian. But if I got to choose who would be playing this role, Jason Isaacs, Hugo Weaving, and Jared Leto would be my top three picks.

Who do you want to see play Grand Admiral Thrawn in The Mandalorian? Let us know in the comments!