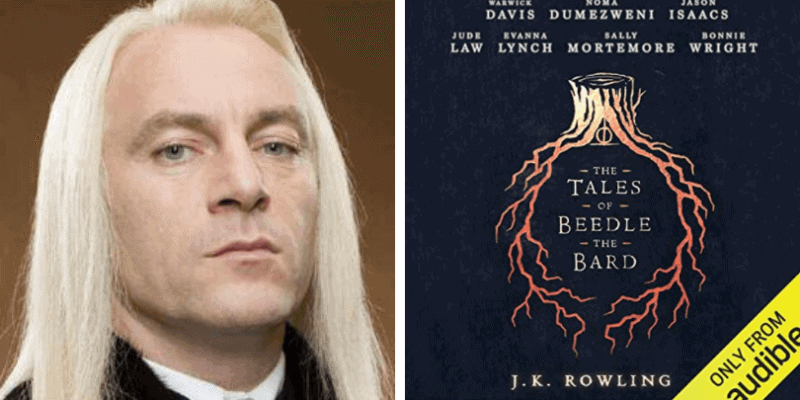 Jason Isaacs has returned to the Wizarding World of Harry Potter. The acclaimed actor was responsible for bringing the infamous death eater Lucius Malfoy to life on the silver screen. But Isaacs is not returning with that magnificent bleach-blond wig to reprise his villainous role. Instead, he will be lending his voice to Audible as they record him and other stars of J.K. Rowling‘s Wizarding World reading the collection of children’s stories, “The Tales of Beedle the Bard.”

Originally introduced to Potterheads in Rowling’s seventh and final installment of the Harry Potter series, Harry Potter and the Deathly Hallows, “Beedle the Bard” is where we find the story of the Deathly Hallows: The Cloak of Invisibility, the Elder Wand, and the Resurrection Stone. But that was just one story of an entire collection, and that collection is now being brought to life with the help of some of the Wizarding World’s most iconic voices.

Isaacs will be joined by:

Isaacs will only be reading one story while, according to SYFY WIRE, “both Law and Mortemore pipe in between each story with ancillary comments that explain certain terms or provide background on how Beedle’s stories influenced wizarding culture over the centuries.”

Known and beloved for his sinister roles in productions from The Patriot to The Dark Crystal: Age of Resistance, Isaacs will be using his cold voice to read the darkest story in the collection: “The Warlock’s Hairy Heart.” But he makes it clear that it is not Lucius Malfoy that will be narrating.

“Lucius Malfoy isn’t telling the story. Jo’s telling the story through Jason’s voice. Jude isn’t being Dumbledore and Warwick’s not being Flitwick,” he explained to SYFY. “That’s all stripped away, we’re just actors and the trick to narrating a great story is to get out of the way of it. You don’t want people to picture you at all. You want to be able to build a picture completely out of the listener’s imagination—of what the people look like and sound like and the situations they’re in … You’re not trying to act, you’re just trying to encourage and nudge their imaginations to build the universe for themselves.”

Isaacs also admitted that while he did read all seven Harry Potter books when he was helping make the movies, he did not read “Beedle the Bard.”

“I wasn’t familiar with them at all, which was great,” the actor says. “Sadly, one of the constants of being an actor and with the advent of the internet, is I don’t read anywhere near as much as I used to when I was younger. I jump at the chance to narrate audiobooks and when someone says, ‘There’s a Jo Rowling story to be done,’ I was [excited] because I hadn’t read them and I wanted to see what she’d come up with. She never disappoints.”

The Audible series was done in partnership with Pottermore to raise money for Lumos, Rowling’s non-profit dedicated to returning institutionalized children home to their families.

“Who wouldn’t want to read any of those stories,” Isaacs asks. “Pretty much everybody, I think, who has been involved with the films, when you come across the work the charity does, you’re so impressed by it … She set up this charity, which does amazing work, and it’s work that nobody else was doing. So many of us [involved] with Potter have been involved in it.”

Audible’s version of The Tales of Beedle the Bard is available now for $14,95. Click here to start listening today!

Have you read The Tales of Beedle the Bard? Which story is your favorite? Let us know in the comments!