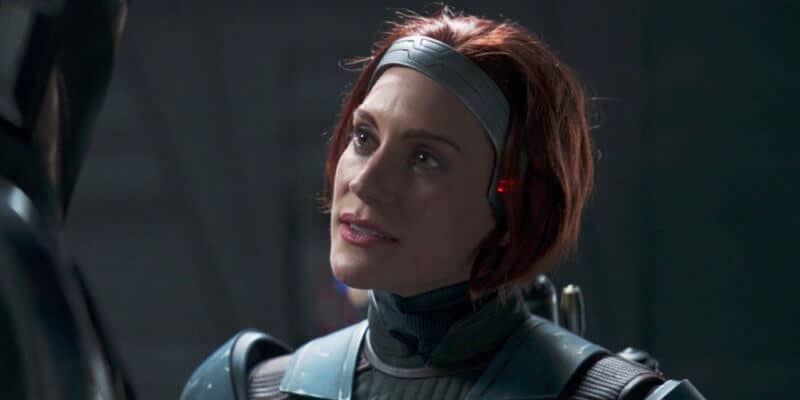 If you’re a fan of The Mandalorian — and basically everyone in America is right now — you probably know who Bo-Katan Kryze (Katee Sackhoff, also of Battlestar Galactica fame) is.

What you might not realize is that Bo-Katan and her Nite Owl Mandalorian warrior crew existed long before The Mandalorian Season 2, Episode 3 (Chapter 11: The Heiress). Many longtime Star Wars fans know Bo-Katan from the animated Star Wars: The Clone Wars and Star Wars Rebels series — both of which Mandalorian executive producer Dave Filoni had a hand in.

Bo-Katan, however, was part of the Star Wars universe even before Rebels debuted in 2014. Her very first appearance was in a Star Wars original graphic novel (OGN) in 2013. Bleeding Cool shared these details on the novel:

..[the graphic novel was] based on the Clone Wars cartoon, Star Wars: The Clone Wars; Legends Of The Temple by Justin Aclin and Ben Bates, for the princely sum of $7.99.

They also provided a brief synopsis of the graphic novel’s storyline:

On a mission with a Jedi general, one clone trooper contemplates his own worth as a copy of a great Mandalorian warrior. He has never been the best soldier, and as he learns about the Jedi and the power of the Force, he begins to feel that perhaps what has been setting him apart from the other clones is his own connection to the Force. As the investigation progresses through a booby-trapped, abandoned Jedi Temple, this one clone will discover who he is and also see where he came from when the Mandalorian Death Watch [including Bo-Katan Kryze] suddenly appears.

As Bo-Katan has recently become increasingly popular, so has the comic featuring her very first Star Wars appearance. As Bleeding Cool’s article notes:

These are wild prices for something that originally cost under $10! If you happen to have a copy of Star Wars: The Clone Wars; Legends of the Temple, you might want to make sure it’s well-protected for posterity.

What’s next for Bo-Katan Kryze?

Without spoiling anything for those who haven’t yet watched the second season finale of The Mandalorian, it seems as if we might be headed for a Darksaber heavy season 3 storyline, which is likely to involve Bo-Katan and Koska Reeves (Sasha Banks). That being said, neither Sackhoff’s nor Banks’s reprisals of their roles have been officially confirmed yet.

Related:Actress Got ‘Hit in the Face’ With Tennis Balls to Learn Bo-Katan Lines

There are currently four known Disney+ series set to take place within the timeline of The Mandalorian — approximately five years after Star Wars: Episode VI – The Return of the Jedi (1983).

These are the original series, Ahsoka — featuring Rosario Dawson reprising as Ahsoka Tano, Rangers of the New Republic, and The Book of Boba Fett — featuring Ming-Na Wen as Fennec Shand and Temuera Morrison as the iconic bounty hunter.

Bo-Katan is most likely to appear in season 3 of The Mandalorian alongside Din Djarin (Pedro Pascal), but could potentially have a cameo in another series as well, depending on how Jon Favreau and Dave Filoni structure the storyline.

While we don’t have many details about the third season of Mando, it’s likely that Djarin will continue his internal quest to fully understand the Mandalorian Creed and the Way of the Mandalore.

There are also some rumors that Bo-Katan’s sister, Duchess Satine Kryze (voiced by Anna Gray), may make a live-action appearance at some point.

What are your thoughts on Bo-Katan’s first appearance in Star Wars selling for over $1,000? Are you the type of Star Wars collector who would pay this sum for a piece of comic memorabilia?