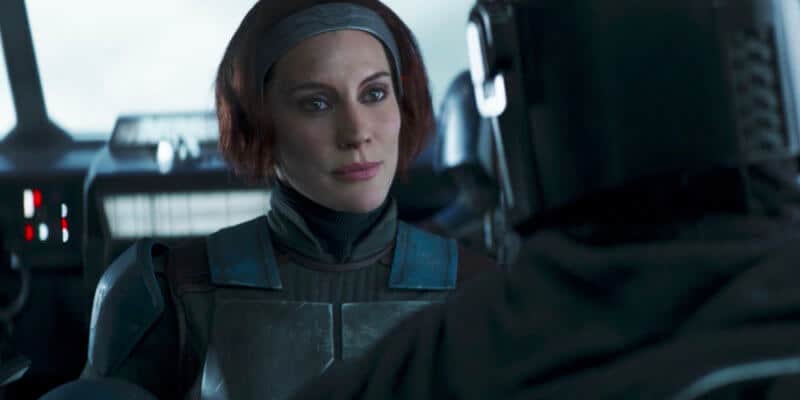 Katee Sackhoff voiced Mandalorian Bo-Katan Kryze in the fourth, fifth, and seventh seasons of the animated Star Wars: The Clone Wars series, as well as the fourth season of Star Wars Rebels.

Related: Din Djarin May Be Forced to Remove His Helmet to Save Grogu

Just recently, fans got to see her live-action debut as the Star Wars character in The Mandalorian Season 2, Episode 3 (Chapter 11: The Heiress). The Bryce Dallas Howard-directed installment saw Din Djarin (Pedro Pascal) connect with Kryze and two other fellow Mandalorians — all of whom view the Mandalorian Creed differently than he does.

Recently, Sackhoff spoke about portraying her long-time character in real life, sharing that the experience of trying on Bo-Katan’s armor for the first time was highly emotional for her. As per the Port Charlotte Sun:

“I legitimately cried. I was standing there with Dave Filoni and he just kept saying, ‘The fans are gonna lose their minds, Katee, they’re gonna lose their minds.’ He and I were just overwhelmed. It looked like Bo literally stepped out of animation into real life. And then I remember that we went in to go show Jon (Favreau). He was so calm in the way that he was picking things apart. We really wanted to get the hair right.”

Sackhoff also spoke about her personal connection to Bo-Katan and how she has evolved since the early seasons of Clone Wars:

“There’s so much about her that I wonder and that I don’t know….How did she get to a place where, for all intents and purposes, she is against her sister? I always found that to be very interesting and I constantly want to know how that happened because I’m so intrigued by this family dynamic.

For me, the main thing with Bo is how she went from a person who had no desire to lead to a reluctant leader and I think that she has grown into that. I always say that just because somebody thinks they can lead doesn’t mean that they can. Bo-Katan is a wartime leader and she wants to bring peace and unity to her people. To me, it would be very interesting to see what that actually looks like for her. Her sister was the leader and I don’t know if (Bo-Katan) ever really wanted this position. I think she’s sort of thrust into it, and she feels she has to. While her sister was a bit of a pacifist, I think she sees that there’s a need for both in a leader.”

Kryze’s sister, Duchess Satine Kryze (voiced by Anna Graves) was the love interest of Obi-Wan Kenobi (voiced by James Arnold Taylor), but Kenobi — true to his character — ended the relationship because of his commitment to the Jedi Order.

Duchess Satine has, to date, not yet appeared in live-action, although many fans would like to see Cate Blanchett try her hand at the role should the opportunity ever arise.

Although Sackhoff didn’t confirm any of the reports that she (or her sister from the animated Star Wars shows, potentially) will be appearing in a Mandalorian spinoff — she’s been rumored for series featuring either Ahsoka Tano (Rosario Dawson) or Cara Dune (Gina Carano) — she did acknowledge that she and her fiance had a lot of fun preparing for her live-action Bo-Katan debut, using an unconventional memorization method:

“My dialogue is very technical on Star Wars and you can’t just memorize it the way you would memorize normal lines. So (my fiance) started throwing tennis balls at me when we were running dialogue because we figured if I could play catch, then I actually had my lines memorized. There were definitely a couple times where I was focused on lines and got hit in the face with a tennis ball. But it was actually the best way to memorize Star Wars dialogue — having balls thrown at your face.”

Are you hoping for more live-action Bo-Katan Kryze in the future? Did you like Katee Sackhoff in The Mandalorian?