Female Mandalorian Armor Sparks Controversy on Twitter - Inside the Magic 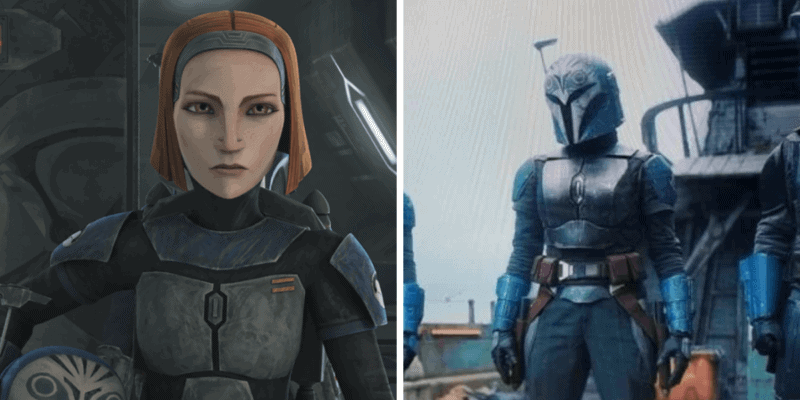 Another great episode of the Disney+ hit series, The Mandalorian, is now unfortunately followed with more controversy.

On the previous episode of The Mandalorian, a controversy erupted on Twitter over The Child, or as we all affectionately call him, Baby Yoda, as he was seen eating the Frog Lady’s eggs. Things got so heated that Lucasfilm actually had to make a statement regarding the situation to help quell the flames.

Also, with the ongoing Twitter outrage in which fans are calling on Disney to fire Gina Carano from The Mandalorian, it seems as if this season is being shrouded in drama.

After the premiere of Season 2, Episode, 3 — titled “The Heiress” — we noticed fans speaking out against the show once again, but this time it was over the shape of the female armor seen in the show. Specifically, the “boob armor”.

Thousands of fans on Twitter started to give their reactions, either for or against the armor.

I mean, an earlier female character in the same series didn't have boob armor. pic.twitter.com/l96spT8E0M

Many fans drawing comparisons to other characters not only in The Mandalorian but also in the Star Wars universe in general.

I particularly love it, but I can see where you come from.

The Armorer is a woman and she doesn't have a boob armor. Same for Captain Phasma in the last trilogy. pic.twitter.com/YkJK5azlYY

While other fans pointed out it was a faithful recreation of the armor the Bo-Katan wears in the Star Wars: Rebels, and Star Wars: The Clone Wars.

This isn’t new news lady she’s been a character in clone wars for over a year now and she has had “boob” amour from the start pic.twitter.com/P8I3Y1XuEC

Here is another example of the armor featured in the animated Star Wars series.

Always have. But off course you never bother to do your reserch. pic.twitter.com/SnRRZDCcQn

It was truly an exciting action-packed episode that introduced characters from animated Star Wars series in live-action for the first time — Bo-Katan Kryze (Katee Sackhoff, voice and live-action actress) appeared in both Star Wars: The Clone Wars and Star Wars Rebels at various points.

In The Mandalorian, Bo-Katan is expected to be heavily involved in the Darksaber storyline. The black-bladed lightsaber is believed to reunify the segmented clans of Mandalore and was given to Bo-Katan by Sabine Wren.

The Mandalorian introduced the Darksaber — now wielded by Moff Gideon — in the Season 1 premiere.

Ahsoka, a Jedi, was Anakin Skywalker’s Padawan and Din Djarin (Pedro Pascal) is seeking her aid to attempt to return The Child (AKA Baby Yoda) to his homeworld and complete his quest.

So what do you think about the armor that Bo-Katan and her fellow female Mandalorian were wearing in the episode? Let us know in the comments.