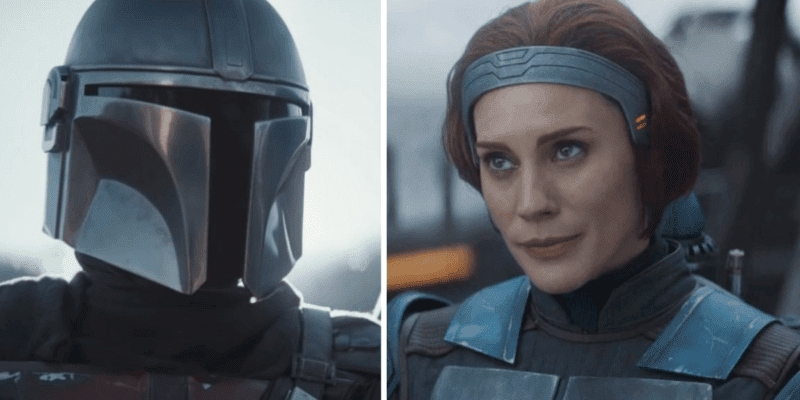 Hardcore Mandalorian fans began creating rumors on Djarin’s strange behavior, as well as the strict rules of The Guild that were present throughout season one.

Everything we learned about Mandalore and the Mandalorians seemed to prove false when watching The Mandalorian. Thankfully, in season two, Chapter 11: The Heiress answers this question in the latest episode of season two.

(Warning: This article does contain spoilers about the events of  ‘The Mandalorian’ season two)

The hit Disney+ series begins the episode with a rough landing of the vessel the Razor Crest — in the ocean — as the Mandalorian and The Child deliver the “Frog Lady” to her waiting husband. In search of more Mandalorians, Din and Baby Yoda are nearly killed on a barge full of pirate Quarren. Suddenly, three Mandalorians swoop in and save Din and The Child.

The rumors were true of actress Katee Sackhoff reprising her role of Bo-Katan in live-action in season two of The Mandalorian. Once Mando and The Child are safe, Bo-Katan Kryze, Koska Reeves (Sasha Banks), and Axe Woves (Simon Kassianides) comfortably remove their helmets in front of the horrified Djarin.

Bo-Katan introduces herself to Din Djarin and states that she is the ruler of Mandalore. Though Bo-Katan states that her Mandalorian armor has been in her family line for three generations, Din is forced to believe that they stole the armor after saying, “You do not cover your face. You are not Mandalorian.” Mando flies off from the barge with The Child, refusing to believe that the three warriors are true Mandalorians.

Much like how he treated Cobb Vanth in Chapter 9: The Marshal after the space-cowboy removes Boba Fett’s helmet for a drink in Mos Pelgo, Djarin refuses to believe these three could be Mandalorians. Bo-Katan reveals that the faction that found Djarin as a young child and welcomed him as a “foundling” was a breakaway syndicate of the Mandalorians that adhered to ancient codes of the Mandalorians that disregard standard terms of “the code.” The “Watch,” Din Djarin’s faction of Mandalorians, may very well be a related faction to “Death Watch” from Star Wars: The Clone Wars. Kryze latter teases Mando by saying, “This is the way,”  to convince him to aid in their commandeering of an Empirical cruiser for information on a Jedi.

Though he aids the three Mandalorians, he views them as imposters and unworthy and wearing any Beskar. Funny enough, Bo-Katan is more deserving and worthy than anyone, even Mando, to wear that armor.

Bo-Katan Kryze is correct, of course. The rightful ruler of Mandalore, who is in the middle of a quest to reclaim Mandalore (again), opens her hand to Din Djarin and invited him and The Child on their journey, but Mando’s perception of what the Mandalorian “code” is and should be stopped him from reuniting with his kin. Djarin isn’t technically a real Mandalorian — much like Jango and Boba Fett. Din Djarin refuses to remove his armor in the presence of other beings, but Jango Fett comfortably removes his helmet in front of Count Dooku in Star Wars II – Attack of the Clones. Though the two do not adhere to the same code, their armor is not a family line originating from Mandalore. Jango Fett murdered a Mandalorian and stole the Beskar, Boba Fett was handed down that same armor, and Djarin is brainwashed from a strict, offbeat regime.

New Star Wars fans should know that true Mandalorians indeed remove their Beskar helmets in front of anyone they choose, living creature or droid. Din Djarin is a “Mandalorian,” but so is Bo-Katan and her clan. The original Mandalorians were a migratory clan-based people of many species, all connected by one common culture. Though Djarin disregards Mandalore as a planet full of lunatics, they are connected through one common culture.

While Mandalorians are a much-divided family, Din Djarin shares the same armor of Bo-Katan and her people. Both are true Mandalorians, but one feels that removing a helmet is against the creed and disqualifies you from the code. It’s a strange rule not to draw a face covering, but it’s pretty standard in this day of age!

Do you think Din Djarin is a real Mandalorian? Let us know in the comments below!