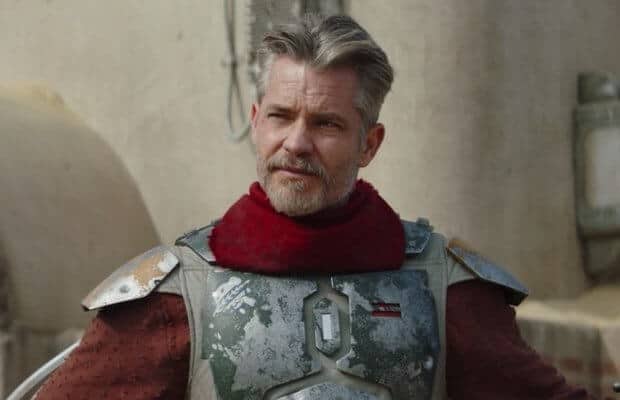 When The Mandalorian Season 2 premiered last week, fans were met with the same classic Star Wars storytelling — and plenty of adorable Baby Yoda moment — they had come to expect from Season 1.

This time, though, there was a new Marshal in town, too. When Timothy Olyphant was confirmed to be joining the cast of The Mandalorian in May, little was known about his role, except that he might be wearing Boba Fett’s armor — which, of course, turned out to be true.

From the moment Olyphant’s Marshal swaggered onto the scene in Chapter 9 of The Mandalorian, he brought fresh energy that took the already hit series to the next level. As a Games Radar article put it:

Cobb is night and day from Mando’s chrome-domed blank slate and slightly muffled dialogue. He’s cool, composed, and there’s a twinkle in his eye hinting at a man who has overcome some of the galaxy’s biggest hives of scum and villainy without breaking a sweat. Mando still appeals, but he’s ultimately tied to Baby Yoda and his journey. Cobb has free rein to go just about anywhere. Even staying on as the sheriff of Mos Pelgo and toeing the line between the Tusken Raiders and any drifters that might head his way has all the makings of a miniseries worth watching.

Related: The One Stop Shop For ‘The Mandalorian’ Baby Yoda Gifts!

Vanth, as Game Radar pointed out, wouldn’t even necessarily have to leave Tatooine in order for a spinoff series to be successful.

There’s no doubt, for example, that Olyphant’s Vanth could find himself dealing with dozens of misadventures — and miscreants — in Mos Eisley alone. As Obi-Wan Kenobi tells Luke Skywalker in Star Wars: Episode IV – A New Hope:

“Mos Eisley Spaceport. You will never find a more wretched hive of scum and villainy. We must be cautious.“

Since we know The Mandalorian takes place approximately five years after Star Wars: Episode VI – Return of the Jedi, the renegade/Wild West culture on Tatooine isn’t likely to have changed much.

The Mandalorian’s place in the Star Wars timeline would also give showrunner Jon Favreau, Dave Filoni, and others the ability to utilize all sorts of ‘Easter Eggs’ from the original trilogy, with the charming, devil-may-care personality of Cobb Vanth as the foundation for the spinoff series.

What do you think? Does Timothy Olyphant’s Cobb Vanth deserve a Disney+ spinoff series after just one episode?

Comments Off on ‘Mandalorian’ Newcomer Cobb Vanth Deserves a Spinoff