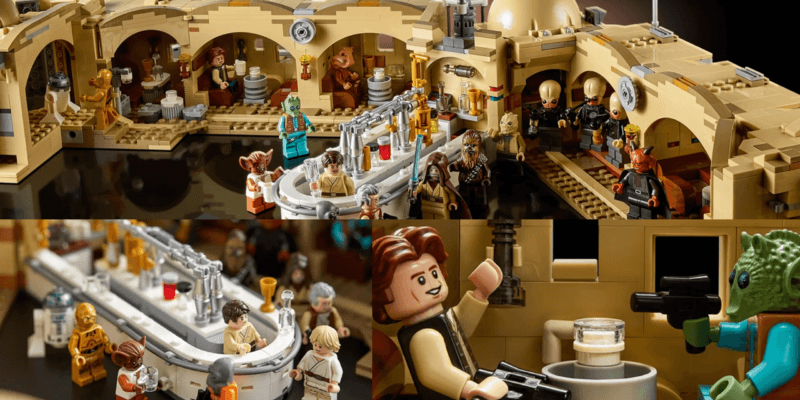 Exciting news for fans of the original Star Wars trilogy as it’s just been announced that a new version of the Mos Eisley Cantina LEGO set is coming out very soon!

Here’s the official description from LEGO:

‘This place can be a little rough.’ In the words of Obi-Wan Kenobi, the Mos Eisley Cantina may be filled with danger, but it’s also an epic build that takes fans back to one of the classic moments in the Star Wars saga. Introduced in Star Wars: A New Hope, the Cantina is the hub of underworld activity in the Tatooine spaceport of Mos Eisley, filled with smugglers and bounty hunters making deals and starting trouble.

Related: What Order to Watch Star Wars Movies and Shows?

So what does this new Star Wars LEGO set from A New Hope come with that makes it a must-buy for any Star Wars fan?

Firstly, the set comes with a whopping 3,187 pieces and a huge number of LEGO minifigures that include:

LEGO has put a huge level of detail into this new set from building the bar within the cantina to recreating the scene where fans debate on whether Han shot first or not:

This new set will be released on the 1st of October and is priced at £319.99 (around $416) so it won’t be long to wait until you can get your hands on this new set! Keep an eye on the LEGO product page as you will be able to order from October 1st!

LEGO has been absolutely smashing it in recent months with their new sets, having recently released a new Harry Potter Diagon Alley set and an incredible Mandalorian set themed to the ship that appears in the hit show.

Will you be purchasing this new Mos Eisley set when it releases in October? Let us know in the comments below!