A new version of the Diagon Alley LEGO set is being released tomorrow and its the biggest and best version to be released yet! The set includes 5,544 LEGO pieces and comes with an incredible 14 Minifigures!

Related: ‘Making of Harry Potter’ Attraction To Open In Japan

Check out a few photos from LEGO below:

The new set includes some of the most famous stores from Diagon Alley. Here’s the full list: 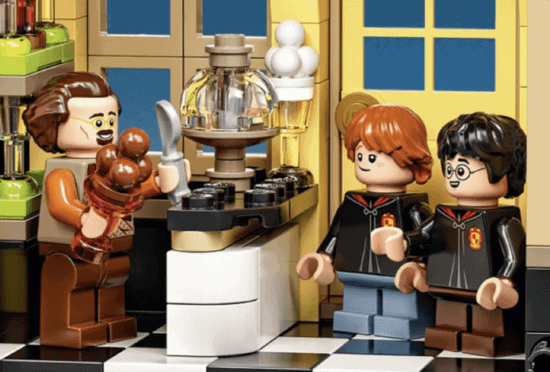 Tap a brick in the wall behind the Leaky Cauldron pub and enter the world of Diagon Alley™, where wizards and witches find their potions and Hogwarts students stock up on school supplies like cauldrons, broomsticks and of course, wands. Measuring over a metre wide, this epic model is filled with authentic film details and a menagerie of 14 minifigures, including four exclusive new characters!

The new set also includes four Minifigures that you can’t get anywhere else:

This new Diagon Alley set is impressive in scale, measuring more than a meter wide, the model really does capture the scale and ambience of the magical street from the Harry Potter books and movies.

The set goes on sale tomorrow (September 1st) and retails at £369.00 (around $495). You can purchase the set directly from LEGO the second it becomes available. We will certainly be hitting the buy button as soon as we can tomorrow!

The detail put into this set really is magical, from the detail in the staircases to the labelling on the products sold in the various stores found in Diagon Alley.

This is perhaps one of our favorite Harry Potter LEGO sets since the Hogwarts Castle and Hogwarts Express set.

What do you think of the new Diagon Alley LEGO set? Let us know in the comments below!