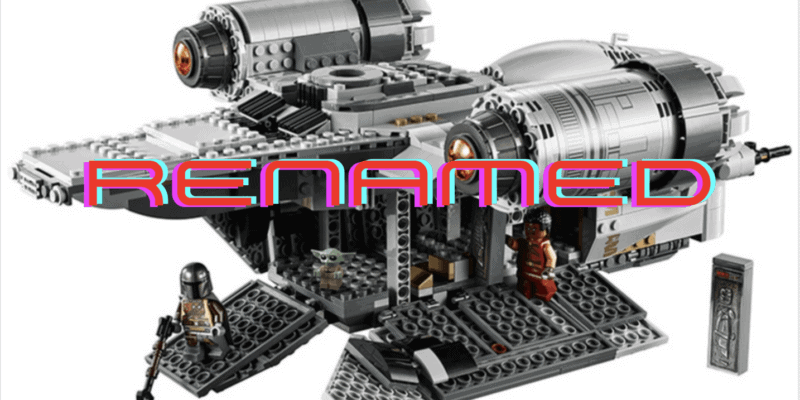 A little over a week ago, LEGO Star Wars 75292 The Razor Crest was renamed to The Mandalorian Bounty Hunter Transport. Details about this LEGO set name change were not immediately available, but we now know that it was due to a copyright issue.

According to Brick Fanatics:

The name “Razor Crest” is trademarked across Europe by Michael Gaßmann, the owner of LEGO-compatible toy Modbrix. Gaßmann apparently submitted the application for the trademark with the German Patent and Trademark Office on January 24 – after The Mandalorian had aired in the US, but before it had arrived in Europe.

In the European market, the name of the set will not be printed on the packaging, so the name change isn’t a major issue. In the United States, however, the name of The Mandalorian LEGO set will appear on the box.

Given that the set is due to release in stores and on LEGO.com tomorrow, this could potentially lead to a major problem for the LEGO company. Since this name change only occurred a few days ago, it serves to reason that all packaging for the Star Wars product was already printed.

It’s likely that the brand has been scrambling to reprint all of the boxes in order to meet these new requirements and avoid any legal issues. This may lead to some delays in each of the products shipping out to customers who place orders.

Role-play adventures
A challenging build for ages 10 and up, this 1,023-piece starship construction kit includes 5 collectible LEGO Star Wars characters, including new-for-August-2020 The Mandalorian and the Child LEGO minifigures. It’s great for role play and combines with other LEGO Star Wars sets for even more action.

You can purchase your The Mandalorian Bounty Hunter Transport starting tomorrow, September 1, here for $129.99.