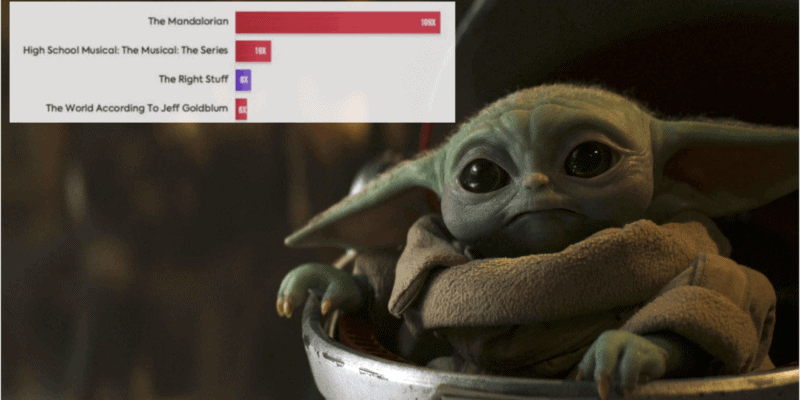 If you haven’t been living under a rock — or riding around in a Sandcrawler on Tatooine — for the past year, you probably already know that The Mandalorian is immensely popular.

The hit Star Wars series premiered on Disney+ launch day, November 12, 2019 and was an instant pop culture phenomenon — thanks, in large part, to The Child (AKA Baby Yoda), whose existence was kept completely under wraps until the show debuted.

Now, The Mandalorian Season 2 has premiered to rave reviews, with some even calling last week’s Bryce Dallas Howard-directed Chapter 11 (Season 2, Episode 3) the best episode of the series so far.

Even if you’re a big Star Wars fan, you might not realize just how popular The Mandalorian really is. Fortunately, journalist Carl Quintanilla took to Twitter today to clear this up for fans around the country.

Quintanilla shared a graphic of a Parrot Analytics graph that indicates The Mandalorian is 109 times more popular than the average U.S. television series 60 days post-premiere.

“Disney+ might as well rebrand as The Mandalorian Channel.” – @pkedrosky $DIS pic.twitter.com/lGDf7oZRwK

Quintanilla quoted Paul Kedrosky and quipped, “Disney+ might as well rebrand as The Mandalorian Channel.”

While this is all amusing, it could actually have serious implications for The Walt Disney Company, who has recently majorly restructured to make their streaming platform their primary focus.

To put things in perspective, other seemingly popular Disney+ series that are featured on the Parrot Analytics chart do not fare nearly as well when compared to shows on a national scale. The next closest series to The Mandalorian is High School Musical: The Musical: The Series, which is approximately 19 times more popular than the average show in the United States — nothing to sneeze at, but certainly nowhere close to Din Djarin (Pedro Pascal) & Co.’s 109 mark.

Showrunner Jon Favreau has already confirmed that there is at least one more season of The Mandalorian in the works — presumably for next year — and Giancarlo Esposito (Moff Gideon) has suggested there many be four seasons in development.

This means that Mando fans don’t have to worry about Din Djarin, Cara Dune (Gina Carano), The Child, and the rest of the Star Wars cast going anywhere anytime soon.

Disney+ cannot, however, continue to rely on The Mandalorian alone.

Coronavirus shutdowns have played a big role in delaying some shows with great potential, but Disney now likely needs — rather than merely wants — Marvel series like WandaVision and The Falcon and the Winter Soldier or other Star Wars series to do as well as The Mandalorian has in order to maintain its spot as the most popular streaming service right now.

What are your thoughts on the popularity of The Mandalorian? Do you watch?