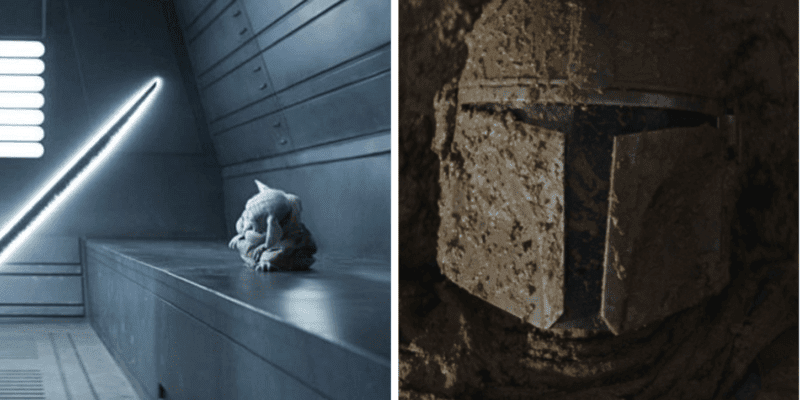 If you watched last week’s episode of the hit Disney+ series The Mandalorian, you know that we are well and truly in the thick of this season’s strife.

The Razor Crest is gone, Grogu (AKA “The Child” AKA “Baby Yoda”) is gone, the Mandalorian’s jetpack may be gone, we’ve dealt with both dark trooper and mortar stormtrooper variants, and we’re definitely in for the “rollercoaster” finish to Season 2 that we were promised.

In the midst of all of this drama, there’s an obvious — and very important — aspect of the story very few fans have been talking about. How will Din Djarin (Pedro Pascal) be able to leave his ever-present Mandalorian armor helmet on and still save Grogu from the hands of Moff Gideon (Giancarlo Esposito) and the rising First Order?

Logically, the helmet has to come off.

First and foremost, there’s no logical way for Djarin, accompanied by Boba Fett (Temeura Morrison) and Fennec Shand (Ming-Na Wen), to infiltrate Gideon’s ship with his distinctive armor on.

Gideon has never seen Djarin’s face, but he is certainly familiar with the beskar armor and helmet the Mandalorian bounty hunter always wears. As Esquire points out in their analysis of this theory:

He wouldn’t even be able to get past the first set of guards wearing the beskar. The plot will demand that he cannot simply throw on a stormtrooper helmet. He will need to impersonate an officer or someone else who isn’t usually concealed in a helmet.

The question, of course, is will Djarin be willing to do this in order to save Grogu? This writer thinks so, which brings us to our next point.

Taking the helmet off is necessary for character development.

When we met Din Djarin in Season 1 of The Mandalorian last year, he was stoic and dedicated to the Mandalorian Creed above all else — including not taking off his helmet.

We did get a brief glimpse of Pascal’s face in the cantina when he, Cara Dune (Gina Carano), and Greef Karga (Carl Weathers) were under siege — IG-11 (voiced by Takia Waititi) needed to use bacta spray on Djarin’s face — but other than that, the hero of Disney’s most popular streaming series has remained hidden under his beskar.

If Djarin willingly removes his helmet to save “the kid”, it will serve as the ultimate testament of his character development, showing his growth from reluctant purveyor of “The Asset” to loving caregiver of Grogu.

The possibility of Djarin removing his helmet has been building in subtle ways all season, such as when Bo-Katan Kryze (Katee Sackhoff) explains that some Mandalorian sects do take their helmets off — our unlikely hero has undoubtedly been pondering the fact that he can still follow “the Way” and show his face.

Esquire summed this point up perfectly:

Mando removing his helmet would legitimately represent how much his character has grown over the show’s two seasons. You have him running around, playing good guy and foster parent. Removing his helmet, a relic of his past as a 9-5, do-the-job-and-go-home bounty hunter, would complete the journey.

What do you think? Are we about to see Din Djarin show his face to save Grogu from the hands of the Imperial remnant?