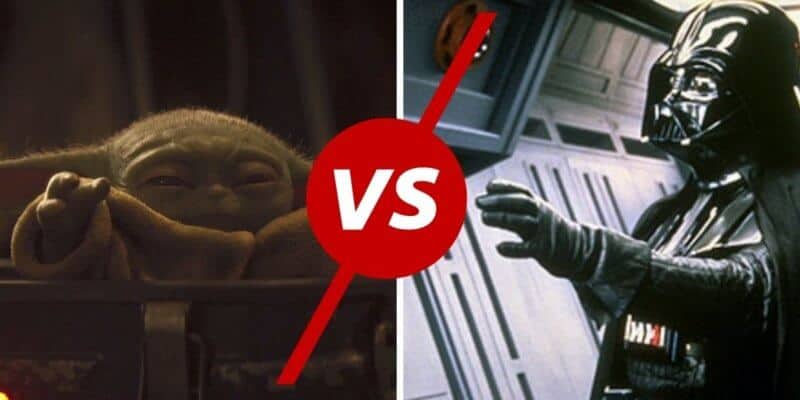 The Mandalorian has taken the world by storm ever since it made its Disney+ debut last year. And now that season 2 is underway, fans are diving even deeper into each and every episode.

SPOILERS FOR SEASON 2, EPISODE 6 (CHAPTER 14) OF THE MANDALORIAN ARE BELOW. IF YOU HAVE NOT YET SEEN THE EPISODE, DO NOT CONTINUE READING.

The latest episode of The Mandalorian had a lot to unpack — From a tragic loss to another blooper including a helicopter, but there is one scene that now has fans thinking — Did the Star Wars series just hint that Grogu (Baby Yoda) is actually stronger than Darth Vader?

In the episode, during the final scene, fans saw Grogu performing a double Force Choke on two Stormtroopers, sending both of them skyrocketing from one end of the room to the other. This double Force Choke was extremely important as no other character has been seen doing something like this in the Star Wars franchise, except maybe Darth Vader.

Darth Vader is known for his singular Force Choke, but what fans saw Grogu doing in the final scene of the latest episode definitely gets them thinking — Is he actually stronger than the original Star Wars villain?

Twitter has been blowing up with thoughts from the episode, including Chriserys Targaryen, who wrote “Baby Yoda/Grogu used the two-handed Force choke and that’s how I know he’s my son.”

Baby Yoda/Grogu used the two handed Force choke and that's how I know he's my son.

Another Twitter user, who goes by Destro M.A.R.S. Inc writes “Feel this. Those watching him force choke the poss out of those stormtroopers also made me kind of want to see Darth Grogu real bad.”

Starry Jane on Twitter also wrote, “Ngl seeing Grogu force choke multiple Storm Troopers at once was one of my fav scenes. Need more content of him being the powerful jedi he is instead of just ‘innocent child’.”

Ngl seeing Grogu force choke multiple Storm Troopers at once was one of my fav scenes. Need more content of him being the powerful jedi he is instead of just "innocent child"

“I’ll tease the past,” Esposito said in a recent interview with Entertainment Weekly. “We are able to refer to the historical nature of mythology that has already been laid down in previous Star Wars incarnations. This particular incarnation allows us as family members to really plant the seeds to realize a more cohesive world. So I love the fact that we’re in such a futuristic show that throws back to the history and knowledge of what a warrior really is and where the line between good and evil sometimes gets blurred with desire. It allows me to dream really big and to realize that no matter what we want to do in life, if we have the aid of people and entities that share the same feelings, then there’s hope again.”

Esposito continued, “So there’s going to be a lot of battles and stormtroopers and all the dark troopers – everyone will get involved. We’re all in a fresh new place to bring it home. I’m so excited to be a part of the show that is the best there is.”

New episodes of The Mandalorian stream on Disney+ every Friday. If you aren’t yet signed up for the streaming service, you can get started here.

Do you think Grogu is stronger than Darth Vader? Let us know in the comments below.