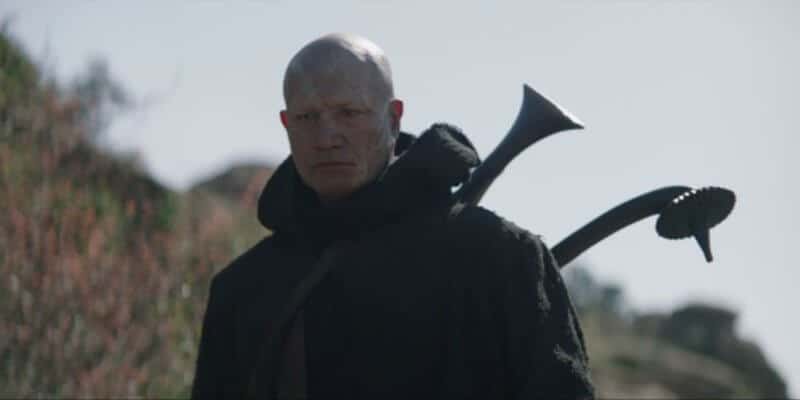 Two weeks ago, The Mandalorian made waves online for all the wrong reasons when a crew member — wearing blue jeans — accidentally appeared in a shot at the Nevarro Imperial base where Dr. Pershing’s lab was ultimately discovered.

Check out our 25 Days of Magic Sweepstakes Going on Now!

The jeans-wearing crew member has now been removed from the episode on Disney+, but now there’s a brand new blunder to amuse fans.

**SPOILERS for Season 2, Episode 6 of The Mandalorian ahead**

In this week’s episode — Season 2, Episode 6 (Chapter 14: The Tragedy) — it would seem that a helicopter flies by during a pivotal moment featuring Boba Fett (Temeura Morrison)’s official introduction to Din Djarin (Pedro Pascal). ComicBook reports:

The helicopter appearance takes place right around 10 minutes and 49 seconds into the episode. For a split second, you can see the helicopter fly left to right above Boba Fett’s (Temuera Morrison) shoulder that’s closest to the left side of the screen. The shot lasts all but half a second, so you’ll have to focus your eyes on the position before you press play. Rest assured, however, the helicopter is most certainly there.

A Reddit user shared this helpful screenshot [below] of the scene, in which a helicopter is definitely visible.

The minor blunder, however, doesn’t detract from the seriousness of this week’s installment of The Mandalorian, which featured Din Djarin taking Grogu (AKA “The Child” AKA “Baby Yoda”) to the seeing stone described by Ahsoka Tano (Rosario Dawson) in last week’s episode, Chapter 14: The Jedi.

By the end of this week’s episode, Djarin has lost just about everything — including Grogu. He is, however, now owed a debt by Fett and Fennec Shand (Ming-Na Wen) who have vowed to protect The Child and will be in Djarin’s debt until he is safely returned from Moff Gideon (Giancarlo Esposito).

Fans of Jon Favreau and Dave Filoni’s hit Star Wars series have already been promised a “rollercoaster” finish to Season 2 and we’re certainly off to a wild start.

What do you think about this amusing Mandalorian blooper?