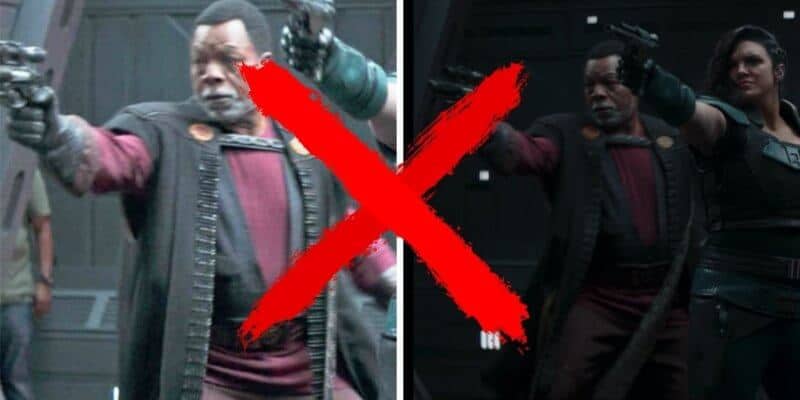 Just last week, fans of the Disney+ hit series noticed a funny blooper that occurred during one of the recent episodes of The Mandalorian. In case you missed it, in a mishap similar to the famous coffee cup in Game of Thrones, the hit Disney+ series had its own blooper — a guy spotted in the background wearing jeans.

In Chapter 12: The Siege, at approximately 18 minutes and 53 seconds into the episode, fans spotted a jeans-wearing crew member in the background of the scene featuring Gree Karga, Cara Dune, and Din Djarin as they storm an “abandoned” Imperial Base on the planet of Nevarro.

This instantly blew up to be an Internet sensation and fans everywhere got a kick out of the jeans-wearing crew member, which you can see in the background below. However, it looks as though he has now been removed from the episode after receiving so much notice.

In the photo below, you can see the famous jeans-wearing crew member on the left-hand side of the screen.

And now, when you go to Disney+ and play the episode, during this same scene you can clearly see the crew member is now gone.

Even though the crew member is no longer spotted in the episode, I think it’s safe to say that fans of The Mandalorian will never forget him!

Season two of The Mandalorian is streaming now on Disney+, with new episodes being released every Friday. If you aren’t yet signed up for the streaming service, you can get started by clicking here.

Are you a fan of The Mandalorian? Do you wish Disney+ kept the jeans-wearing crew member in the episode or are you glad to see him be removed? Let us know in the comments below.

Comments Off on Jeans-Wearing Crew Member Removed From ‘The Mandalorian’