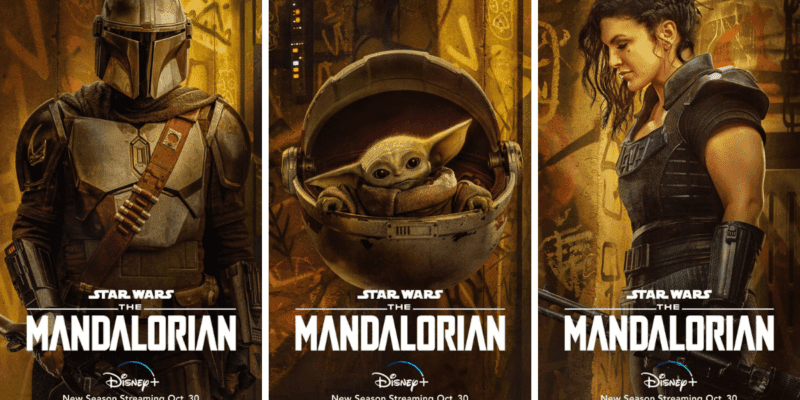 Season 2 of The Mandalorian is fast approaching and we wanted to go over all of the details we already know about the new season of Mando with you!

Stream on Disney+ October 30th, This is the way.

Disney released four new posters for Season 2 of The Mandalorian, including this incredible poster of The Child.

The sophomore season of The Mandalorian will feature 8 episodes, with each new episode releasing on a Friday starting on October 30.

Check out this great interview between Dave Filoni and Jon Favreau about Season 2 and get some hints as to what is coming next for our favorite space cowboy and Baby Yoda.

It has been confirmed that Rosario Dawson will be joining the cast of The Mandalorian as the fan-favorite Star Wars: The Clone Wars character, Ahsoka Tano.

This is a HUGE deal for super fans of Star Wars. But, she’s not the only character joining the star-studded cast of The Mandalorian.  We also know that there is a strong likelihood of Temuera Morrision playing iconic bounty hunter Boba Fett. According to MovieWeb, his agency added the role to his resume recently, essentially serving as confirmation.

Another popular rumor is that Pilot Hera Syndulla from Star Wars Rebels will appear.

We cannot wait to see the characters we do know about and the ones who remain a surprise!

We reported earlier this year that The Mandalorian will be taking fans back to Tatooine. Since this is a world most Star Wars fan are familiar with, it is great to see it returning to the franchise.

We shared a few sneak peek pictures of Season 2 that show Tatooine and much more, take a look here!

The latest trailer for The Mandalorian has fans excited for more adventures in space with the characters we have come to love last season.

And even though the one and only official trailer for season 2 was released pretty late in the game, all things considered, Disney is not holding back on the marketing for fans. This year they are introducing Mando Mondays which is a special merchandising event the Monday after each new episode releases.

Here is what they say about Mando Mondays:

After you watch the latest episode on every Friday on Disney+, visit MandoMondays.com the following Monday to see what new toys, collectibles, apparel, books, comics and more will be unveiled. To celebrate this announcement, select pre-orders for the first wave of Mando Mondays products will kick off today at 1 p.m. PT/4 p.m. ET at top retailers globally, including Disney Springs at Walt Disney World Resort, Downtown Disney District at Disneyland Resort and shopDisney.com.

There is a lot to look forward to this season of The Mandalorian, only two weeks to go now until we get the season premiere episode!

Watch the trailer for season 2

What are you most excited about this season? Let us know in the comments!