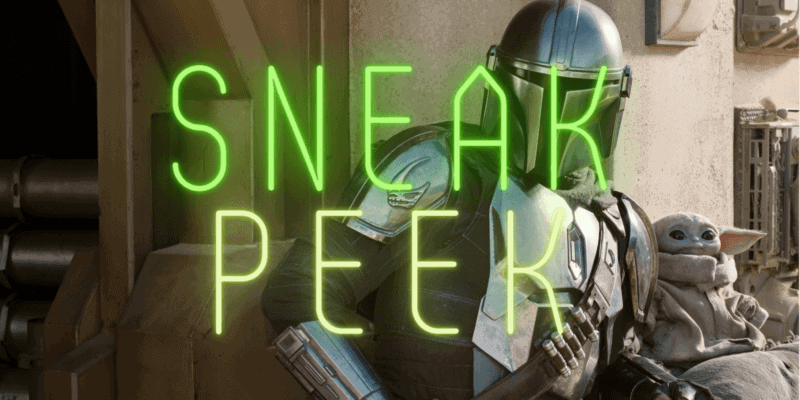 If you’re a Star Wars fan, you’ve been eagerly anticipating the arrival of The Mandalorian Season 2 for almost a year. Showrunner Jon Favreau and Co. have kept us in suspense, revealing very little about the storyline for the sophomore season.

Now, however, after confirming an October 30 release date, Disney and Lucasfilm have finally given us an inside look at the upcoming season of The Mandalorian.

New adventures await… Check out the new images from the second season of @TheMandalorian as seen in @EW. New episodes start streaming Oct. 30 on #DisneyPlus. (2/2) pic.twitter.com/QJGqjTGf89

Among the featured pictures are this image of Mando and The Child riding a speeder, presumably escaping from something.

We also see a sneak preview of a pensive Moff Gideon (Giancarlo Esposito). Gideon is expected to play a major role in this season of The Mandalorian due to the fact that he now wields the Darksaber, which first appeared in the Season 1 finale of the hit Star Wars show.

In this image, fans get a glimpse of the now-iconic Baby Yoda, still wearing his signature robe.

Finally, in this photo, we see Cara Dune, the Mandalorian, and Greef Carga (Carl Weathers) looking like they are on a serious mission. Carga doesn’t usually accompany the bounty hunter on his assignments, so we can assume this is a special occasion that warrants his presence.

Pointedly, the powers-that-be at Disney+ didn’t release any first-look pictures of Rosario Dawson as Ahsoka Tano or Katee Sackhoff as Bo-Katan Kryze. We’ll have to wait until next month to see these popular Star Wars: The Clone Wars and Star Wars Rebels animated characters make their live-action debuts.

Are you looking forward to Season 2 of The Mandalorian? What do you think about these sneak peek pictures of the whole gang back together for more adventures?

Comments Off on Disney Gives Exclusive Sneak Peek at ‘The Mandalorian’ Season 2!