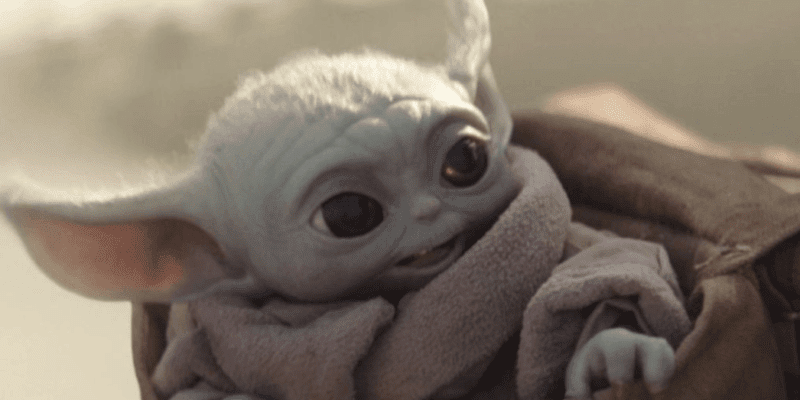 Can you believe how long it’s been since “Baby Yoda” burst onto the scene as the 50-year-old ball of cuteness in the first episode of Jon Favreau and Dave Filoni’s hit series, The Mandalorian?

‘This is the Way’ to the Best Mandalorian Sweepstakes

Disney+ launched on November 12, 2019 — and The Mandalorian quickly became its flagship series. When fans met The Child — who Ahsoka Tano (Rosario Dawson) has now informed us is an Order 66 survivor named Grogu — “Baby Yoda” fever took hold, and it had a tremendous impact on the growth trajectory of the Disney streaming service and American popular culture as a whole.

The show also set the standard for Disney+ original content and turned people who have never watched a Star Wars movie in their lives into fast fans of a galaxy far, far away.

Even when the show isn’t airing, the adventures of Grogu, bounty hunter Din Djarin (Pedro Pascal), and their motley band of companions — now including Jedi Master Luke Skywalker — are a hot topic of conversation in many circles.

The Mandalorian Season 2 finale had everyone on the edges of their seats and, ultimately, changed the trajectory of the Star Wars universe with the reintroduction of Mark Hamill’s iconic character.

The degree to which Disney+ has impacted the Walt Disney Company — and pop culture — as a whole is staggering. For example, Walt Disney Studios ultimately decided to release several films initially intended for theatrical release, including Onward, Mulan, and Soul, exclusively on Disney+.

The company has also wholly restructured to focus on Disney+ streaming content, which includes at least 11 Star Wars series over the next several years.

Despite all of this, however, The Mandalorian, was the most popular of all the shows on Disney+ in its first year.

Since its release, the Star Wars show has unsurprisingly taken the internet by storm. After all, Grogu is arguably the most meme-worthy character to grace television sets in years.

Showrunner John Favreau and other executives made the right call not doing any merchandising that featured the adorable character before The Mandalorian Season 1. This gamble paid off the second Star Wars fans met The Child for the first time!

From the moment the little guy came on screen, he captured the hearts of every viewer, Star Wars fan or not. Now, Baby Yoda is on everything from cereal boxes to bedding sets, and you couldn’t escape him even if you wanted to (but who would?).

Now, there are more Mandalorian memes than ever. Whether you’re having a rough parenting day, are feeling overly emotional about the state of the world, or want a “snacky snack” (“Chicken nuggets,” in particular), there’s a Grogu meme for that.

Luckily for you, we’ve scoured social media and dug through the annals of Twitter to assemble all of the Baby Yoda memes you need to get you through even your toughest day.

Related: How Mandalorian Tech Can Save Hollywood

Enjoy, we hope you do. (See what we did there?)

Whether you are a parent who has been on the verge of sleep when your little one (clad in Star Wars pajamas) comes to the door to tell you the bad news or you’ve taken this walk of shame to your parent’s bedroom, we can all relate to this:

We’ve all been there — whether you’re the dad in this scenario or “The Child,” so to speak:

When your dad asks you to help with something and he doesn’t tell you what to do, so you just stand there like… 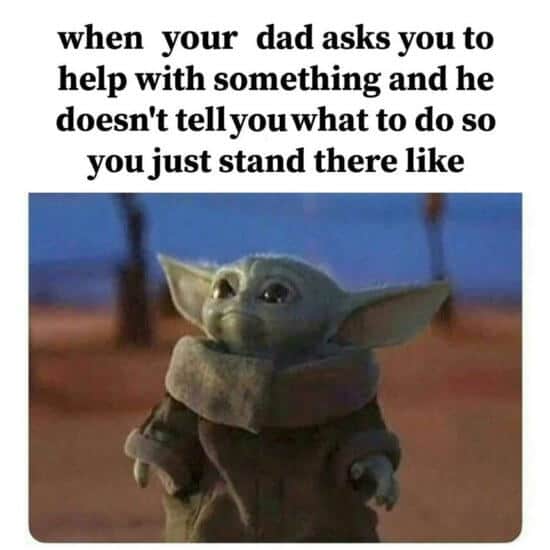 “Why did I name you Baby Yoda? Because you were destined for greatness, my child.” Hopefully, no children will relate to this meme in a decade, but as the Star Wars franchise has taught us, never say never:

This photo of Star Wars creator George Lucas meeting Grogu for the first time went viral when Jon Favreau first shared it (of course). Now, it’s been turned into a somewhat cringe-worthy — yet still amusing — meme: 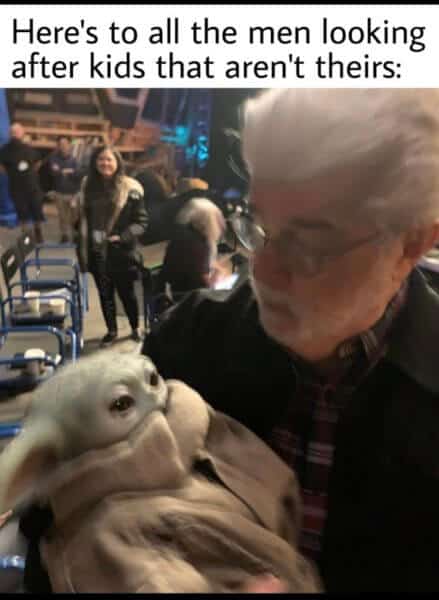 Starting a new job is equal parts exciting and nerve-wracking. Either way, you walk in fresh-faced and ready for the new challenge. Then, life happens, and you’re left looking like a Dagobah swamp dweller in the original trilogy. Enjoy your youth, Padawans:

Your first day at work vs. 1 year in your company 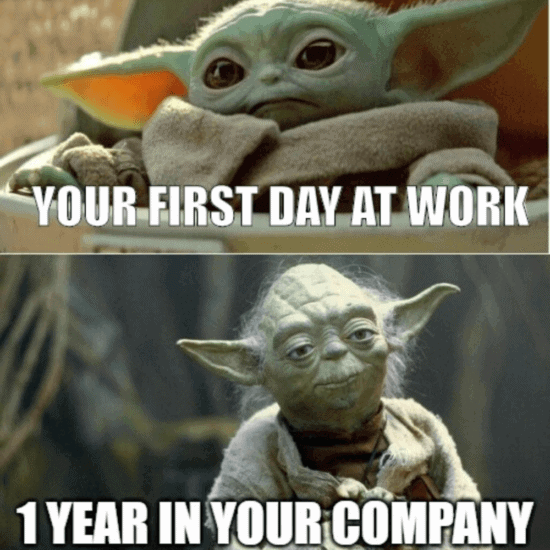 As happy as Baby Yoda can be, even he can experience “the Mondays,” like in this meme that shows Grogu’s range of emotions — which are probably similar to most office workers’ feelings on any weekend. We hear bounty hunting is a pleasant alternative profession:

Me on Saturday vs. Me on Monday 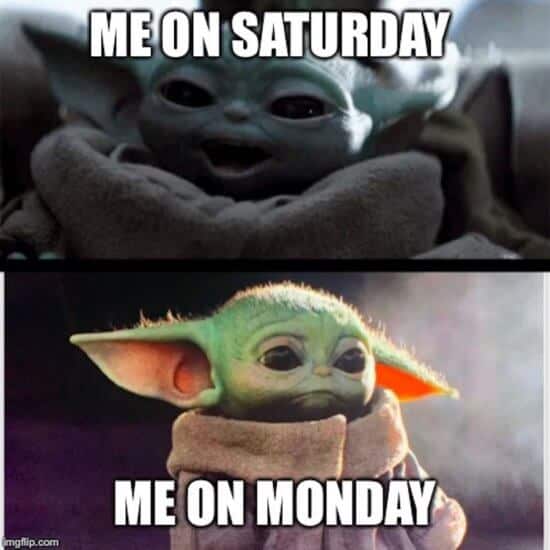 If you’ve ever felt like your boss is stricter than Season 1 Din Djarin, you’ll relate to this meme about cell phone usage at work on company time:

Me, waiting for my boss to leave so I can look at Baby Yoda memes. 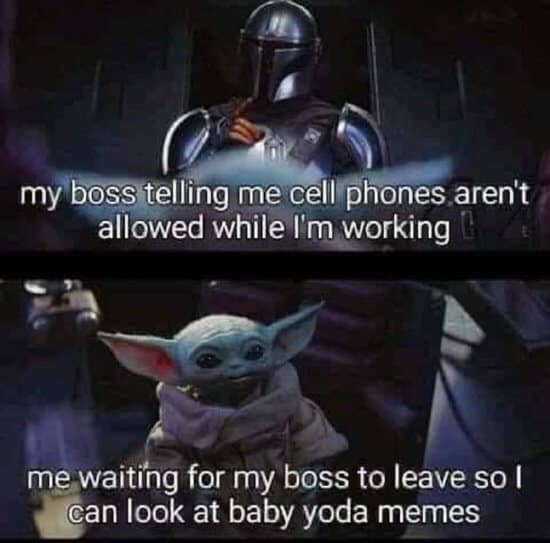 We all have our version of this meme, especially if you live near Walt Disney World Resort or Disneyland Resort — hey, it’s not your fault there are so many Mickey-shaped snacks! Baby Yoda is right there with you, sharing the sentiment:

Wondering why I can’t lose weight 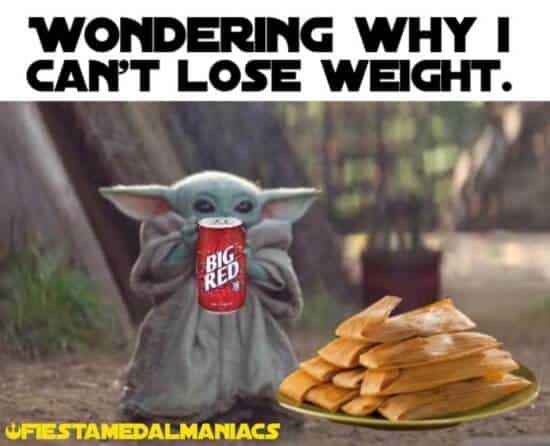 We’ve all done it. You’re walking into your local pharmacy and seeing the surveillance feed. As you grab a shopping cart, you stare at yourself until out of frame. We all wish we looked as adorable as Baby Yoda, but you win some, you lose some. As this Mandalorian meme says:

Me…looking at myself in the security camera at CVS 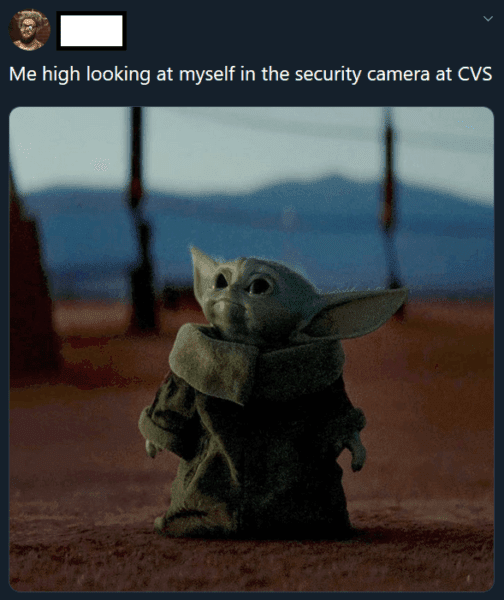 This Baby Yoda lifestyle meme will surely hit you where it hurts if you’re a gamer. This is probably pretty close to the face you make when you find yourself in this exact situation: 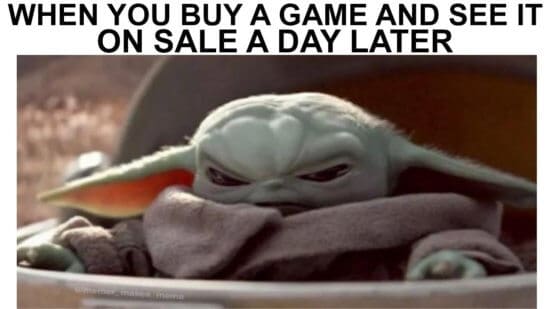 Every mom watching you open presents on Christmas morning

Every dad just as surprised as you 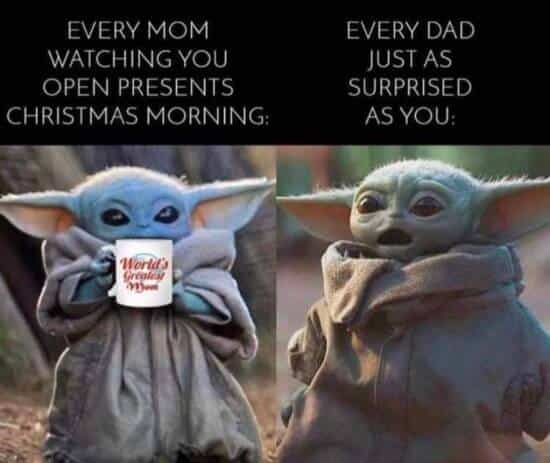 Whether or not you enjoy politics, this Baby Yoda meme will make you chuckle. You’re going to read the bottom panel in Emperor Palpatine’s voice. We guarantee it. Someone call Mace Windu (Samuel L. Jackson) before this adorable alien becomes too powerful! The meme showcases the Jedi youngling saying, “I am the Senate,” after a photo of a real news headline that reads: 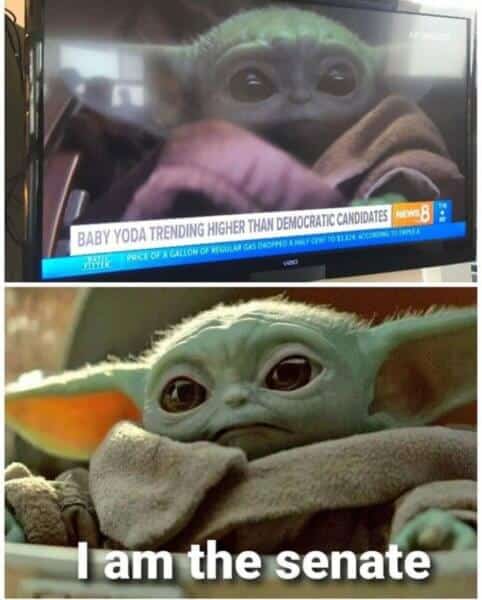 We’ve all been there. Stuck in Economy class on a long flight, trying to use the Force to telepathically let the flight attendant know we’d like an upgrade. Never worked for you? Yeah, me either. Here, though, Baby Yoda looks to be having some success: 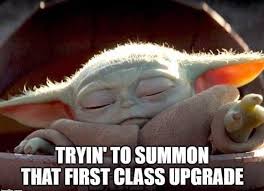 If you’ve ever traveled for work, you probably feel this meme featuring our favorite adorable little creature in your soul. The first image features tiny Grogu on the “First Day of Business Trip,” while the second image showcases Grand Master Yoda at the “End of Business Trip.” 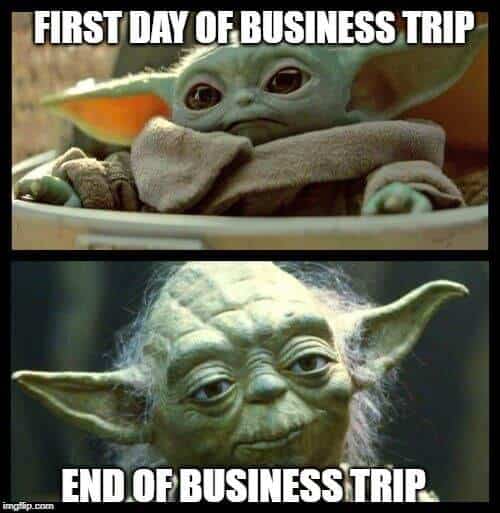 A more accurate Baby Yoda meme may not exist. We can’t deny that Star Wars sequel trilogy droids BB-8 and D-O (and the porgs from Ahch-To, of course!) are all adorable. However, none of them hold a candle to the cuteness overload that is Baby Yoda. 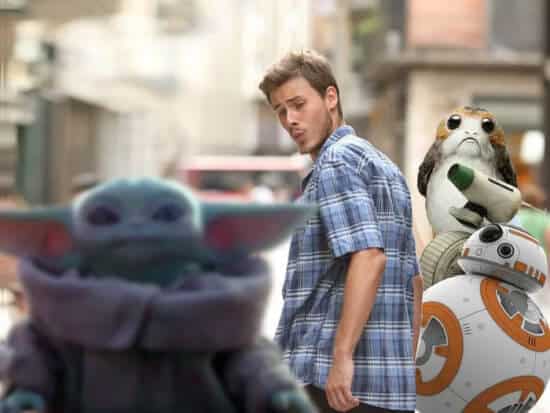 I don’t think any is denying this meme. Baby Yoda is now and forever the cutest Disney Princess. There’s no contest.

Cutest Disney Princess I am 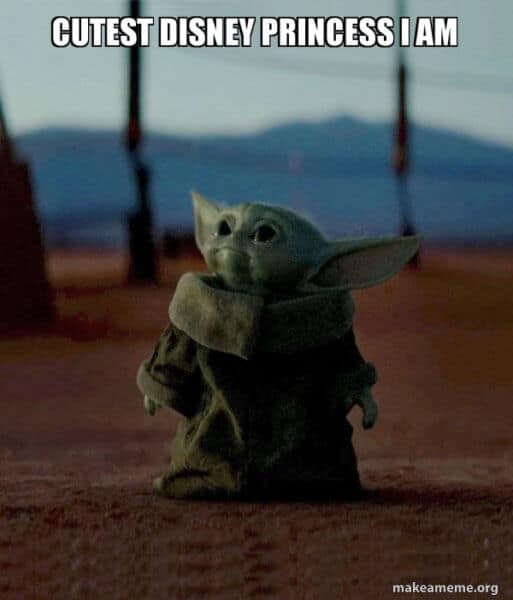 If you’re reading this article, you undoubtedly understand this meme on a profoundly personal level. The breakout star of The Mandalorian — our deepest apologies to titular Mandalorian, Djarin — looks too cute for words in his Sorcerer Mickey ear headband, ready for a day in his favorite Disney. Theme Park, all by 6:30 a.m! 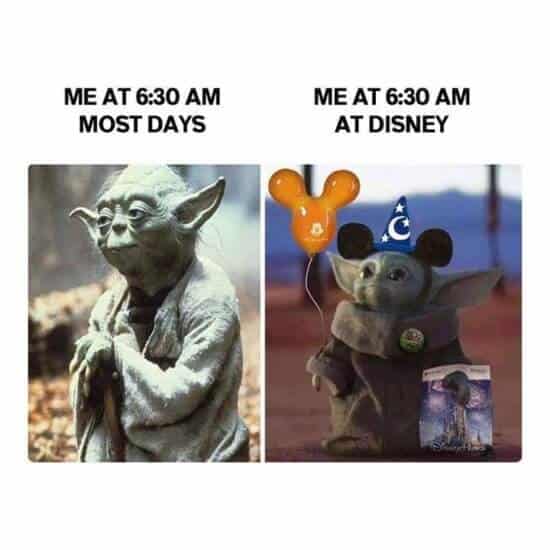 What’s next in The Mandalorian saga?

As fans anxiously await The Mandalorian Season 3, knowing the latest episode of the hit series came out months ago at this point is getting tougher and tougher to swallow.

Right now, Mandalorian creators Jon Favreau and Dave Filoni haven’t given us much to go on when it comes to plot points for the upcoming season. We can anticipate, however, that the Darksaber story arc isn’t done yet — Bo-Katan Kryze (Katee Sackhoff) still wants the black-bladed Mandalorian weapon to avenger her sister, Duchess Satine Kryze’s, death and retake Mandalore.

Right now, however, Djarin wields the Darksaber after winning it in battle with Moff Gideon (Giancarlo Eposito).

Furthermore, The Mandalorian is set to have three spinoff series — Ahsoka, Rangers of the New Republic, and The Book of Boba Fett. Plus, we all know our favorite little green alien will show up again somehow.

Which of these Baby Yoda memes is your favorite?