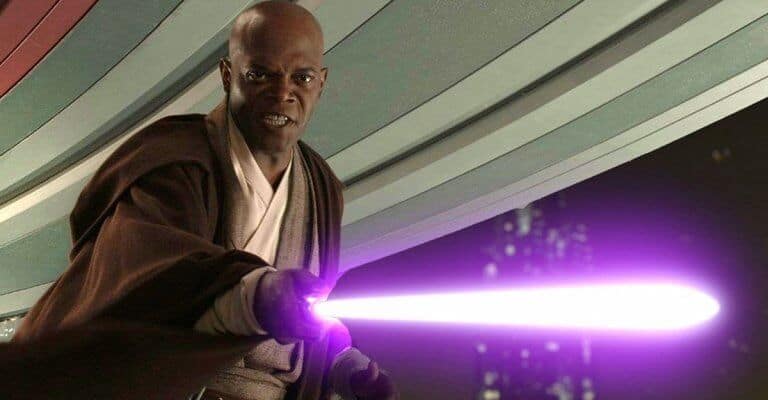 If you’ve been following the second season of the hit Jon Favreau and Dave Filoni show, The Mandalorian  — the Season 2 finale debuted on December 18, crashing Disney+ in the process — you probably know that Mace Windu (Samuel L. Jackson) has been a hot topic online.

When Star Wars Rebels and Star Wars: The Clone Wars character Ahsoka Tano (Rosario Dawson) finally revealed Grogu’s (AKA The Child AKA Baby Yoda) backstory in The Mandalorian Season 2, Episode 5 (Chapter 13: The Jedi), the audience — along with Din Djarin (Pedro Pascal) — learned that the tiny foundling had been undergoing Jedi training at the Jedi Temple on Coruscant during the execution of Order 66.

Although Ahsoka asserts that Grogu’s memory of the situation goes “dark” after a certain point, she did share that someone saved him from Jedi Knight Anakin Skywalker’s (Hayden Christensen) carnage as he descended into Sith Lord Darth Vader. Many fans immediately jumped to the conclusion that his rescuer was none other than Mace Windu.

Both Jackson and Star Wars creator George Lucas have previously stated that they believe Windu survived his force lightning battle with Darth Sidious/Emperor Palpatine (Ian McDiarmid) in Star Wars: Episode III – Revenge of the Sith (2005) — which resulted in him falling out of a window after Anakin Skywalker intervened in the confrontation to save Palpatine’s life.

Now, the official Star Wars Instagram account seems to be fueling the fire. On December 21, Jackson’s birthday, the Star Wars social media team shared the following post, which was captioned:

Commenters immediately starting responding that, at first glance, they thought this was an announcement that Windu – -and his purple lightsaber — would be returning to the Star Wars universe. This assumption was bolstered by the fact that the Star Wars team cryptically said, “The party isn’t over, it’s just beginning!”

With Grogu now training alongside Luke Skywalker (who appeared as a de-aged CGI version of Mark Hamill) and multiple Mandalorian spinoffs announced — Ahsoka, Rangers of the New Republic, and The Book of Boba Fett — in addition to The Mandalorian Season 3, there are plenty of opportunities for Windu to potentially be written back into the storyline.

Furthermore, it has already been confirmed that both Christensen and McGregor will be reprising their Skywalker Saga prequel trilogy roles – as Darth Vader and Obi-Wan Kenobi, respectively — in Deborah Chow’s OBI-WAN KENOBI: An Original Series limited-run Disney+ show, so it certainly isn’t out of the realm of possibility for a prequel character to return to a galaxy far, far away.

In regard to timeline, Jedi Master Mace Windu would be approximately 81-years-old by the time The Mandalorian Season 3 premieres. At this time neither Disney nor Lucasfilm have confirmed Jackson’s possible Star Wars return.

Jackson is already confirmed for a Marvel Studios Nick Fury series on Disney+.

What do you think? Will we see Mace Windu in The Mandalorian or one of its Star Wars spinoff series?