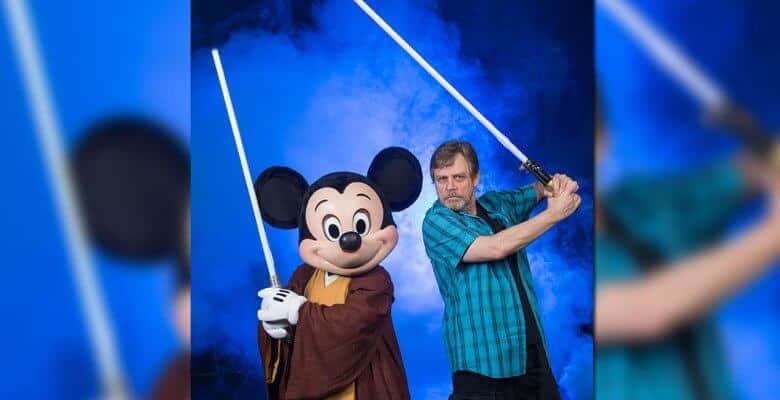 Earlier this year, Hamill delighted every Star Wars fan when he confirmed he has had cameos in nearly every Star Wars movie, even those his character, Luke, didn’t appear in. On his official Twitter account, he noted:

“Now that @themandalorian secret is out [Hamill did the voice of bartender droid EV-9D9 for the Jon Favreau and Dave Filoni series in Season 1] -might as well reveal I am vocally represented in ALL SW films except the Prequels. Thanks to @matthewood for using me in Rogue One, Solo & the Sequels, so I DO have lines in #EpVII. Hint: Look for parts played by Patrick Williams.#TrueStory.”

**SPOILERS ahead for The Mandalorian Season 2 finale**

Skywalker — with the aid of his green lightsaber — takes care of the troopers himself, then swoops in to save Grogu (AKA The Child AKA Baby Yoda) and spirit him away to complete his Jedi training, which was tragically interrupted during the execution of Order 66 at the Jedi Temple on Coruscant.

The day after the finale dropped on Disney+ — its popularity briefly crashing the streaming service — Hamill once again took to social media, Tweeting:

The fact that we were able to keep my involvement a secret for over a year with no leaks is nothing less than a miracle. A real triumph for spoiler-haters everywhere!

The fact that we were able to keep my involvement a secret for over a year with no leaks is nothing less than a miracle. A real triumph for spoiler-haters everywhere!#LooseLipsSinkStarships #STFU pic.twitter.com/TOBqlXYyHN

While Hamill’s next move in the Star Wars universe isn’t yet known — he has previously said he will pass Luke’s lightsaber to another actor for live-action work — there are rumors of a new Disney+ Luke Skywalker series in early development and reports that the character will return to the world of The Mandalorian, either in the main series or one of its spinoffs, Ahsoka, Rangers of the New Republic, and The Book of Boba Fett.

It is possible that de-aging technology could be used again, but more likely that another actor, like Sebastian Stan, will get a chance to take on the iconic movie role.

For now, we continue to be impressed with the fact that Hamill and the entire Mandalorian team have been able to surprise us two seasons in a row — first with the sheer existence of a being as cute as Grogu and now with the re-emergence of Luke Skywalker a year after the Skywalker Saga ended with the final film in the sequel trilogy, Star Wars: Episode IX – The Rise of Skywalker (2019).

What could they have in store for us next? Perhaps a Star Wars Rebels character we’ve already secretly seen?

What do you think is next for Luke Skywalker and how will Star Wars fans react?