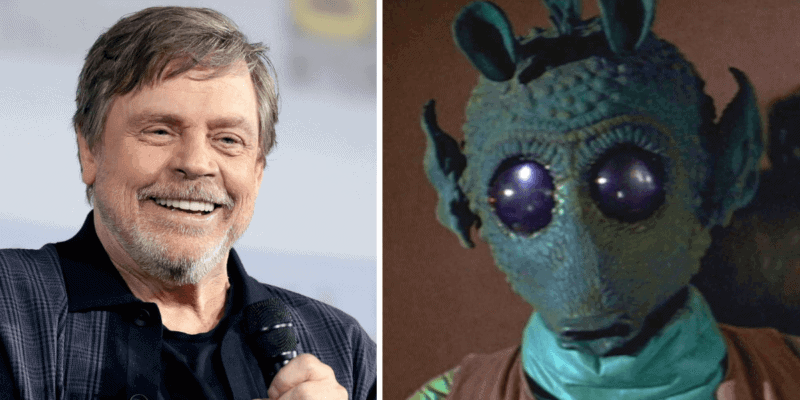 For the first time since Star Wars IV – A New Hope released in theaters in 1977, Luke Skywalker actor Mark Hamill finally weighed in on one of Star Wars‘ most debated topics: Did Greedo or Han Solo shoot first?

Mark Hamill, 69, is one of the most beloved Star Wars actors of all-time and never shies away from answering tough questions about George Lucas’ classic movies. Hamill shared the big screen with Harrison Ford and Carrie Fisher in 1977 when Star Wars IV – A New Hope shattered box-office records, quickly becoming the highest-grossing and most influential movie of all-time.

Never before had audiences been so blown away, but there’s one scene in A New Hope that still has fans talking. Like politics and religion, you never bring up the “Han Shot First” topic among co-workers, friends, or even family.

In the second act of Star Wars IV (or the first Star Wars), young Luke Skywalker and Ben Kenobi enter the dimly-lit Mos Eisley Cantina on the planet of Tattooine. In search of a fast ship and cheap pilot, the two stumble across pilot Han Solo and his co-pilot Chewbacca, who require some serious credits! After striking a deal and preparing to leave the bar, Han Solo is kept behind by a Rodian Bounty Hunter named Greedo.

The bulbous-eyed alien points a blaster at Han Solo and forces him to sit down at a table. The two have a quick exchange; Greedo says Solo is good as gone due to the deadly Jabba the Hutt’s bounty on him, and Han states, “Over my dead body.” While they talk, Han Solo slowly reaches for his blaster and the two exchange shots.

In the original 1977 theatrical version, Han Solo stays calm and steady as he shoots his DL-44 blaster pistol and hits Greedo. The pilot is as sly as Clint Eastwood in The Good, the Bad, and the Ugly and takes out the bounty hunter without a second shot. It appears that the two shoot at precisely the same instant, but many Star Wars fans began to debate who “shot first.”

Related: When Will Ahsoka Tano Appear in ‘The Mandalorian’?

For the 2004 re-release and digitally remastered version, George Lucas specifically edited the scene for Han Solo’s head to slightly move to his left, as though Greedo shot first.  In the 1997 remastered version, it shows Solo returning the shot after Greedo fires first.

This sparked an enormous battle between Star Wars fans, as many thought this edit made Greedo, a legendary bounty hunter, miss this shot from across a table. Han Solo, who has a nose for trouble, would allow a bounty hunter who’s speaking as if he’s going to kill him, enable the Rodian to get the first shot off.

You can watch both the 1977 and 2004 version side-by-side and see the change in scenes below:

Many feel that the change of the tension was unnecessary, while others praised the change. Personally, the movement of Han Solo’s head seems a little unrealistic, and Solo seems like the kind who wouldn’t flinch at a blaster shot.

Luke Skywalker himself took to Twitter earlier this week and shared a GIF of Han Solo and Greedo’s confrontation. In the GIF, neon words spell out “HAN SHOT FIRST” and show Greedo being shot. You can check out the tweet below:

You can always rely on @jaketapper for BREAKING NEWS. https://t.co/l5pr3X4R8T

In the Tweet, Hamill wrote, “You can always rely on @jaketapper for BREAKING NEWS.”

It’s something for fans to state “Han Shot First,” but everyone needs to listen up when Mark Hamill chimes in. Fans in his Tweet comments are cracking up and agree with Skywalker, but there are a few who can’t but help disagree with the actor.

It’s refreshing news with Hamill’s tweet, and we hope it helped clarify the confusion from Star Wars!

Do you think Han shot first? Let us know in the comments below!