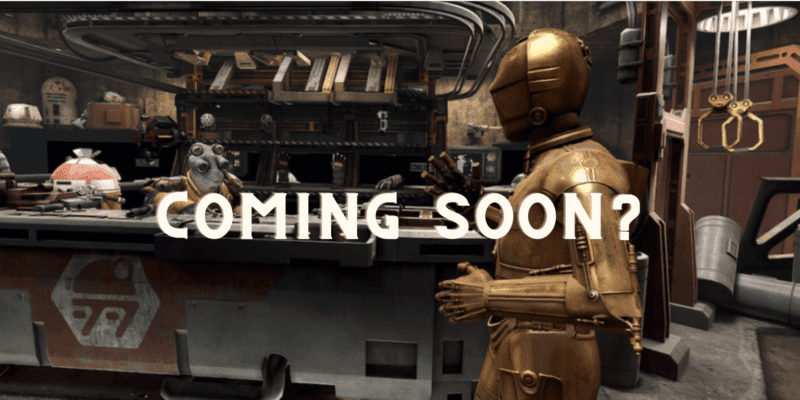 The powers that be at Lucasfilm and Walt Disney Imagineering are working double-time to give Star Wars fans a deep and meaningful backstory for Batuu, the planet that you enter when you walk under the Star Wars: Galaxy’s Edge arches.

The latest venture that aims to bring Batuu into fans’ homes — literally — is the new virtual reality Star Wars: Tales From the Galaxy’s Edge game. The immersive VR experience allows Oculus users to truly live their own Batuuvian adventure. The official description of the game reads:

You’ll fight alongside classic characters like R2-D2 and C-3PO (Anthony Daniels), and face intimidating villains, like Guavian Death Gang cell leader Tara Rashin (Debra Wilson). Visit Seezelslak (Bobby Moynihan) in his cantina to pick up missions that will take you into the wilds of Batuu — or become part of an all-new tale alongside Jedi Master Yoda (Frank Oz) himself.

If you’ve been to Galaxy’s Edge, the first thing you probably noticed about this description in that Oga’s Cantina — the now famous bar at Disney’s Star Wars lands on both coasts — is nowhere to be found. Instead, Seezelslak’s Cantina is mentioned. If you’re thinking, “Wait, what?,” you’re not alone.

Here, we take a look at how Seezelslak’s could come to Galaxy’s Edge at Disneyland Park, bringing with it an intense rivalry that would further enhance the experience for visitors who come to Batuu.

OC Register has provided some helpful backstory about the rivalry between Oga and Seezelslak:

“His [Seezelslak’s] ship is also his cantina and he has actually flown and landed it literally on top of Oga’s,” Perez [ILMxLAB Director Jose Perez III] said. “While he’s there there’s definitely a rivalry that’s going on.”

The rivalry ended — at least for the time being — when Seezelslak fled Black Spire Outpost before Galaxy’s Edge opened at Disneyland in May 2019.

“We don’t say how long he actually landed there,” Perez said. “We do know that when you go to the park, something has happened and Seezelslak has left.”

Could Seezelslak’s Cantina return to Galaxy’s Edge and resume the rivalry with Oga’s Cantina?

“Will you see Seezelslak in the parks?” Perez said. “I don’t know yet. I would love for that to happen. How rad would that be?”

Whatever happened to Seezelslak — perhaps Chewbacca ran him out of town or he lost a game of sabacc to a passing-through Lando Calrissian — this writer would love to see the Azumel bartender return to Blackspire Outpost. The more buildings and characters there are in the Star Wars themed land, the more realistic it feels every time you walk through the gates.

Plus, a Seezelslak animatronic would be immeasurably cool.

Who exactly is Oga?

“Seezelslak is the antithesis of Oga,” Perez said.

Seezelslak is a bit rough around the edges and a little kooky. The bar owner is a six-eyed Azumel just like the alien who played sabacc with Han Solo and Lando Calrissian in the 2018 “Solo” film.

Oga Garra is a no-nonsense local crime boss who controls the underworld in Black Spire Outpost and has a stake in every shady deal that goes down in her cantina. Her reservations-only Star Wars cantina did gangbusters business slinging pricey space cocktails when Disneyland was open. The Galaxy’s Edge cantina has been a cash machine for Disney as Star Wars fans pay $18 for alien cocktails, $45 for souvenir mugs and $85 for collectible beer flights.

Seezelslak, on the other hand, according to Tales From the Galaxy’s Edge, was doing….er, significantly less well with his cantina.

This story arc, actually, could be a good thing for Disney. Imagine for a moment, that a real-life Seezelslak’s Cantina inside of Star Wars: Galaxy’s Edge offered a slightly less expensive menu, giving those who don’t want to pay Oga’s prices — or can’t get an Oga’s reservation — the ability to still experience a Star Wars cantina.

Sounds like a win-win for both Disney’s bottom line and the overall Guest experience.

Why should a second cantina come to Disneyland?

I should start by saying that I love both Galaxy’s Edge East and West — in fact, there are few Star Wars-related things I don’t love, save for Jar Jar Binks — but, I wish that Walt Disney Imagineering had differentiated the parks from one another a bit more.

I understand, of course, the finances. A billion dollar investment — twice over — is intense any way you slice it. As a fan, though, there’s something fun about different experiences at different Disney Parks. Adding a second cantina to Disneyland Park’s version of Star Wars: Galaxy’s Edge is the perfect solution that wouldn’t cost…well, another billion.

Plus, Walt Disney World Resort is set to get the incredible Star Wars: Galactic Starcruiser hotel next year, which will set it apart from the West Coast iteration of Batuu.

It’s about time Disneyland got something to make its Galaxy’s Edge theme park stand out, too. Since there will never be room for a Halcyon luxury starliner in Anaheim, a second cantina makes perfect sense.

What do you think? Should the ‘Cantina Wars’ get to play out at Disneyland Resort?

Comments Off on The Cantina Wars: Is a Second Establishment Coming to Rival Oga’s at Disneyland?