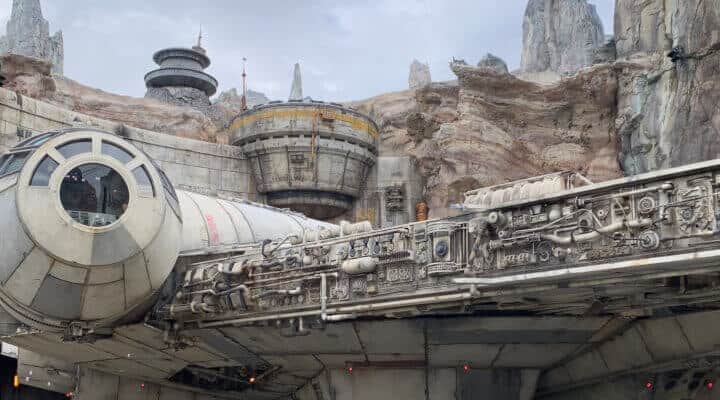 Many a Disney Parks fan has dreamed of being a fly on the wall during Walt Disney Imagineering meetings.

If you’re a Star Wars fan, this sentiment has probably never been more true than when it comes to the development of Star Wars: Galaxy’s Edge. Arguably the most immersive land Disney’s Imagineers have ever pulled off, Galaxy’s Edge — at both Disneyland Park at California’s Disneyland Resort and Disney’s Hollywood Studios at Florida’s Walt Disney World Resort — transports Guests to the Outer Rim planet of Batuu.

Once visitors pass through the arches into Galaxy’s Edge they are literally transplanted into another world. There are new phrases to learn (including “Bright suns!”), new places to explore (like the Blackspire Outpost marketplace), and new characters to get to know (such as farmer Bubo Wamba).

The lands both opened in 2019 — Disneyland’s in May and Disney World’s in August — and are extremely similar to one another. As a matter of fact, they are nearly identical, right down to the 100-foot-long Millennium Falcon replicas and two rides — Star Wars: Rise of the Resistance and Millennium Falcon: Smuggler’s Run — that are featured at each park.

Now, however, Star Wars: Galaxy’s Edge Imagineers Scott Trowbridge and Robin Reardon have shared details about the design process that WDI went through while developing the Galaxy’s Edge concept.

“Early on, you can imagine the conversations we had about Tatooine, Hoth or Dagobah — all these classic places that we have seen in Star Wars storytelling in the past,” Trowbridge said during the webcast. “But for us, from the very beginning, we said, ‘No we don’t want to do that.’”

The goal was to create a place where Disney theme park visitors could experience their own Star Wars story rather than recreate hero Luke Skywalker’s story on Tatooine or heroine Rey’s story on Jakku.

“We wanted to build a place that felt like it was the perfect stepping off point for your adventure,” Trowbridge said during the webcast. “A place rife with opportunity, rife with possibility.”

Related: You Can Unlock A Secret ‘Chewbacca Mode’ on Millennium Falcon

This tracks with everything we know about Galaxy’s Edge, including stories and sketches that are shared in the recent coffee table book, The Art of Star Wars: Galaxy’s Edge.

There were plans to create two different planets.

“We did have a moment where we considered building a different project in each location, but it was a very short moment,” Trowbridge said during the webcast. “We pretty quickly realized that the right thing to do was for us to build sister versions of the same place on each coast.”

The Imagineering and Lucasfilm teams decided to design one and build two Galaxy’s Edge themed lands set in the Black Spire Outpost village on the Star Wars planet of Batuu. The result: Batuu West debuted at Disneyland in May 2019 and Batuu East opened in August 2019 at Disney’s Hollywood Studios.

“We knew that it was going to be more inefficient to design two different things,” Reardon said during the webcast. “We built two of everything at the same time.”

Related: What Makes Disneyland and Disney World Unique From Each Other

Many fans would have been thrilled with this, as there is a push in the Disney community to keep the company’s theme parks unique from one another.

It is worth noting, however, that due to the sheer size constraints at Disneyland Resort, it is not set to receive a Star Wars hotel like the upcoming Galactic Starcruiser hotel that is set to open on Disney World property next year. This will differentiate the Galaxy’s Edge experiences for some Guests who choose to take part in the fully immersive intergalactic vacation.

Would you have preferred two completely different versions of Star Wars: Galaxy’s Edge or do you like that the themed lands are nearly interchangeable?