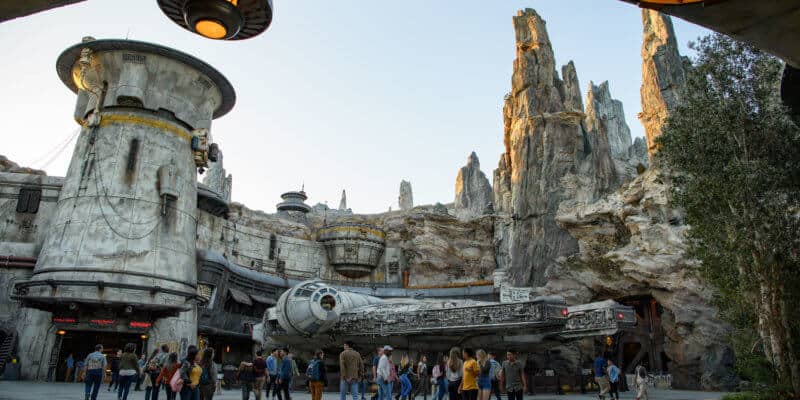 Trowbridge was involved in every aspect of the creation of Galaxy’s Edge, from the 100-foot-long full-scale replica of Han Solo’s Millennium Falcon to the most minute details, like the hand-painted rock formations on the walls surrounding Docking Bay 7 Food & Cargo.

If you’re headed to Batuu in the near future, you have a lot to look forward to:

Trowbridge told the D23 Inside Disney hosts that publishing initiatives are one way The Walt Disney Company hopes to expand the Star Wars: Galaxy’s Edge experience, making Blackspire Outpost even more meaningful for visitors who take the time to read various texts.

He took the opportunity to announce that the Star Wars: Galaxy’s Edge Trading Post collection (more details below) will include a special Target edition of Star Wars: Myths and Fables. This book includes the “fairy tales, myths, and legends that have been passed down through generations in the world of Star Wars.” 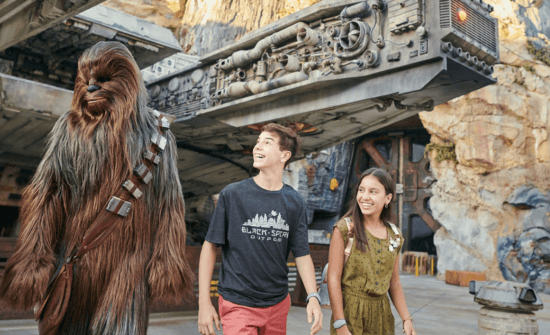 Both only-at-Target Star Wars books will feature a custom cover and three brand new Batuuvian stories that have never before been shared with the Star Wars fandom.

Continuing his announcements, Trowbridge shared details about the first-ever Star Wars children’s book created by his team, Ellie and Me.

According to Trowbridge, the kids’ story is about two creatures (Ellie and Salju) who “live on Batuu in Blackspire Outpost.” He shared that “these are two characters we first came up with when we were first conceiving the land. We just fell in love with these characters! This is the cutest book that I’ve ever seen.”

Trowbridge continued, “Star Wars has always been a place to experiment with new and innovative forms of storytelling.”

He also stated that if “my barometer of excitement” for other new experiences coming to Galaxy’s Edge in the theme parks is any indication, fans have a lot to be excited about moving forward!

Trowbridge quipped, “That opportunity to take a piece of that experience and kind of relive it at home…is great. I wish everyone could go to one of our Galaxy’s Edge parks every day of the year…but, you know, that’s hard.”

The Galaxy’s Edge Trading Post merchandise collection at Target is an exceptional way for the Disney team to bring Batuu to people all over the country, some of whom may have never even had the chance to visit one of Disney’s theme parks before.

Trowbridge also shared that the teams at both Disney and Lucasfilm are striving to constantly “extend the world of Galaxy’s Edge” into people’s homes via various mediums, including books, merchandise, and video games.

Trowbridge also shared some surprising hidden “Easter eggs” from Season 1 of the Disney+ series The Mandalorian. All of these were previously hidden in Blackspire Outpost’s Dok-Ondar’s Den of Antiquities shop.

In the D23 Inside Disney podcast interview, Trowbridge said, “A place like Galaxy’s Edge wants to always feel like it’s alive and like a place for new adventures to break out at any second.”

He continued, “When the land first opened…for example…a particular helmet and a particular pulse rifle that were there [Dok-Ondor’s] on opening day and nobody really knew what they were or what it meant.”

The artifacts in question were, of course, featured in The Mandalorian later in 2019!

Click here to listen to the full D23 Inside Disney interview with Scott Trowbridge!