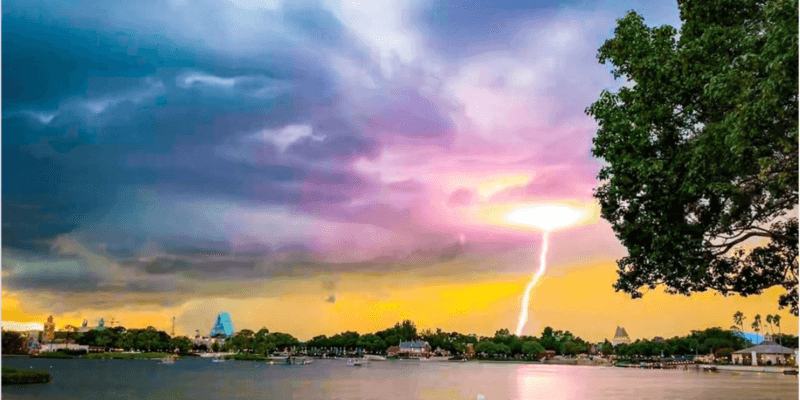 On the evening of Monday, August 10, a massive lightning bolt came down from the sky and struck Star Wars: Galaxy’s Edge at the Walt Disney World Resort.

The lightning strike was recorded by several bystanders either in Disney’s Hollywood Studios or in nearby EPCOT.

Austin Coppock, who first posted the video to Twitter told ABC News that his 10-second clip of the lightning cut off because the “boom of the thunder shook the ground and I let go of [the record button].”

Instagram user @herewiththeears caught a picture of the event from World Showcase in EPCOT, writing,

“Watching the lightning hit nearby while we’re in Epcot is both amazing and scary.”

A post shared by Here With The Ears (@herewiththeears)

While it is common to experience a thunderstorm at Walt Disney World–or anywhere in Central Florida for that matter–lightning strikes at Disney Parks are rare, especially those of this magnitude. Walt Disney World Cast Members are also trained to take certain precautions when lightning is detected near a theme park. For instance, outdoor and water-based attractions such a Splash Mountain and Astro Orbiter will be shut down until the lightning storm moves further away.

No Guests were reported injured. Black Spire Outpost and the rest of Disney’s Hollywood Studios closed to Guests at 8:00 pm and the lightning strike occurred almost an hour afterward. No Cast Members were reported to be harmed either.

However, since this article’s original publication, we have learned that the fan-favorite attraction Star Wars: Rise of the Resistance has been closed since Disney’s Hollywood Studios opened as normal at 10:00 am on Tuesday, August 11. Many speculate its closure is connected to the lightning strike.

Read More: Rise of the Resistance Still Down After Lightning Strike

But this is not the first time lightning has struck Walt Disney World. Just last month a construction crane which was most likely working on the new hotel called The Cove was struck by lightning and caught on fire. No one was harmed there either.

It is fitting, though, that Disney’s Star Wars-themed land was the place to get hit by lightning. After all, the chief villain of the Star Wars franchise, Emperor Palpatine was known for being able to use The Force to shoot lightning from his fingertips. Many on social media likened the event in jest to Palpatine unleashing his wrath upon the rebel outpost.