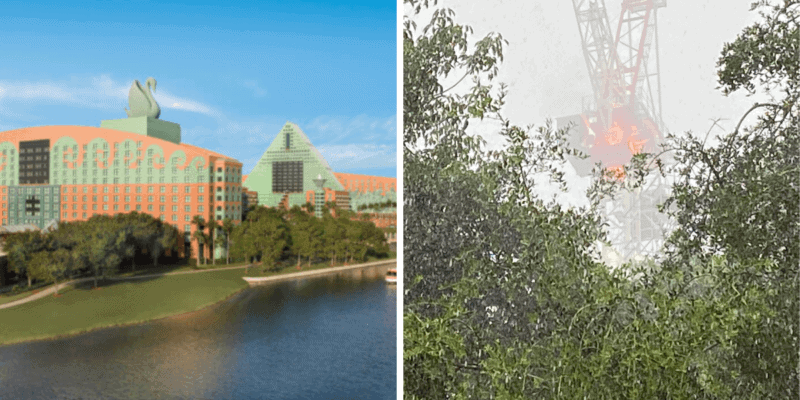 A construction crane located at Disney’s Swan and Dolphin hotels caught on fire today after suddenly being struck by lightning.

I just watched lightning hit this crane at the construction site at the Swan and Dolphin. Smoke and flames active. Scariest thing I’ve ever seen, loudest noise I’ve ever heard. I’m shaking. pic.twitter.com/zsZnmKGipM

A Tweet shared in reply stated that the fire has since been put out.

Other Twitter users replied, suggesting that the construction site was not active.

Not active during a thunderstorm. OSHA would have an absolute fit if they were even if it wasn’t hit by lightening for this reason alone

Disney World has not yet released a comment on this matter.

While other Walt Disney Resort hotels have already reopened to Guests, the Swan and Dolphin remain closed, stating at the beginning of June that it will remain shuttered to Guests through July 29, 2020. Recently, however, Inside the Magic reported that the Swan and Dolphin will be used to house Major League Soccer players while the league completes its season at the ESPN Wide World of Sports Complex. The “MLS is Back” tournament is expected to run from July 8, 2020, to August 11, 2020.

This is one of many construction sites currently underway around Walt Disney World Resort property. Other construction projects include EPCOT’s revamp which will feature, among other things, a new entryway, and attractions based on Moana, Guardians of the Galaxy, and Ratatouille; a redesign of Cinderella Castle as well as the addition of the TRON: Lightcycle Power Run rollercoaster; and the creation of a fully-immersive Star Wars hotel.

Walt Disney World shuttered construction for several weeks due to the global pandemic, and it is still unclear how that postponement will affect the projects’ competition. Many of which were scheduled to be ready for Disney World’s 50th Anniversary Celebration.

Read More: Photos of Cinderella Castle Makeover From Inside Park

Are you surprised a Disney Crane was struck by lightning? Do you think Disney is trying to do too much at once at Walt Disney World? Let us know in the comments!

Comments Off on Construction Crane Catches Fire at Disney World